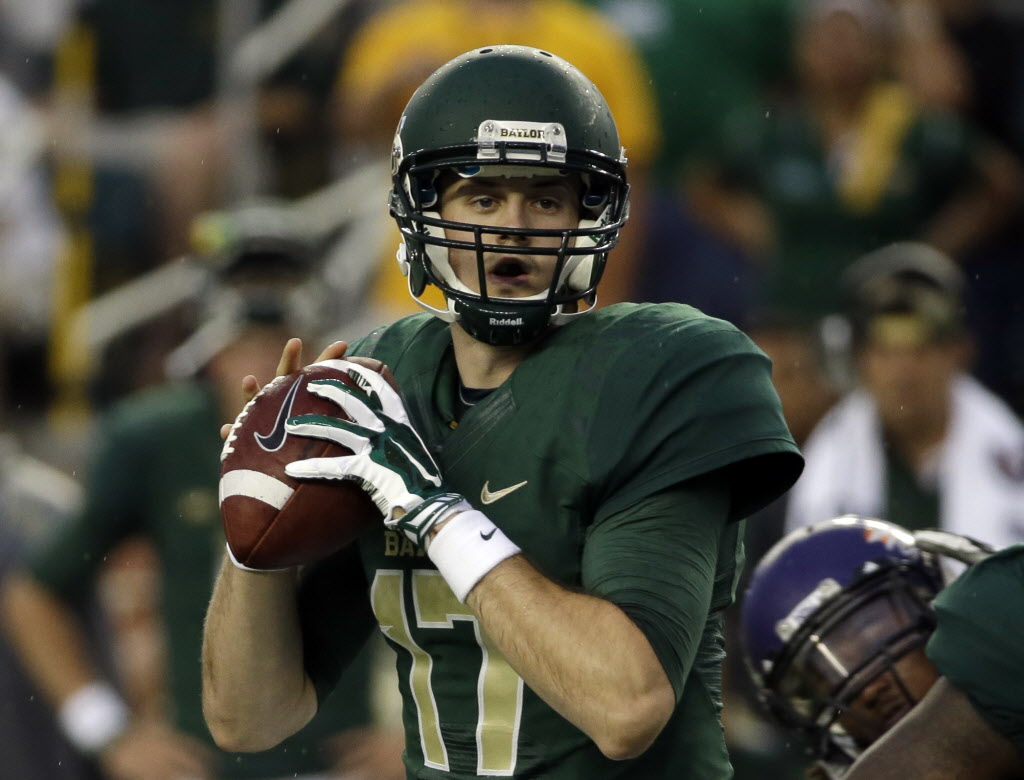 The Art Briles era at Baylor University is no stranger to mobile QBs. The first name that comes to mind, very obviously, is Robert Griffin III. In each of his major starting seasons in Waco (2008, 2010, 2011), Griffin rushed for greater than 600 yards and a 4.3 YPC average for his career. Considering that college stats consider sacks as a negative rushing play, these are pretty good numbers. After Griffin left for the NFL, expectations for incumbent starter Nick Florence were reasonably lower. After all, in 2009 Florence rushed for merely 62 yards in 10 games, starting in place of an injured Griffin and Blake Szymanski. However, Florence flourished in 2012, rushing for 568 yards, 4.09 YPC and 10 TDs. Florence rushed for 450 yards his senior year in high school, good stats but not what many scouts would consider near the elite ability of RGIII.

Bryce Petty lacked the speed or agility that Florence and Griffin possessed, and subsequently played a drastically smaller role in the run game than his predecessors. Still, the pocket-bound Petty had 14 rushing TDs in 2013 and 6 in 2014. It should have been very evident to Baylor opponents that in the red zone or on the goal line, Petty was a clear option to keep the football. 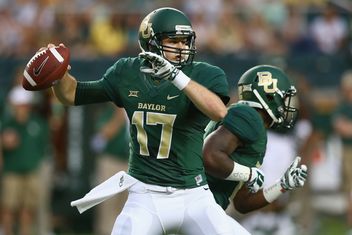 Now the keys of the Baylor sports car offense are passed off to Seth Russell, the JR out of Garland, TX. Russell, playing in the same high school district as Nick Florence, had far inferior stats and much less acclaim as a recruit. Clearly, Baylor fans could not expect great production from Russell, right? In Russell’s first bout of playing time in 2013, he showed some athletic ability that was unexpected and an interesting change of pace from Petty’s propensity for standing tall in the pocket. He rushed for 147 yards, 6.13 YPC, and 3 TDs in mop up duty. Although these rushing stats were earned against opposing defenses also offering backups quality playing time, they were no doubt impressive. Perhaps the most alarming of Russell’s 2013 stats were his 3 INTs. However, he threw for a comparable completion percentage, yard per attempt, and rating as starter Petty. In 2014, playing considerably more, Russell improved his turnover rate, yards per attempt, and passing TDs while remaining a cog in the run game. Russell’s 185 rushing yards, 5.78 YPC, and 3 rushing TDs meant opposing defenses had to respect his ability on the ground.

2015 is Russell’s first opportunity as a full time starter. Many beyond the Baylor football program don’t know what to fully expect from Russell, and even some familiar with Russell’s exploits aren’t sure. It can be argued, however, that Russell is primed for a fantastic season under center for the Bears. The easiest case for Russell’s success is the standard of excellence under Head Coach Art Briles. Dating back to 2008, the QB that played the majority of Baylor’s games as the starter averaged 3433 yards per season passing, 24 passing TDs, 445 yards rushing, and 9 rushing TDs. Some say, though, that Russell has the benefit of the best team Briles has ever fielded in 2015. Looking up and down the Baylor roster, it’s hard not to agree. Seth Russell could be primed for a special season along the banks of the Brazos.

Russell shows his greatest ability in the ground game when the play breaks down. A talented runner on design runs, Russell really grabs your attention when the pocket begins to collapse. Though not as quick as Griffin, Russell has shifty feet and nose for making people miss. Russell's mobility in the pocket will extend plays and allow the talented Baylor WR corps to get open in space, something that many felt was missing during Petty's tenure. Opposing defenses will have to commit a player to following Russell, like they did during Griffin's Heisman season, which will in turn open up spaces on the field for the passing game to flourish even more. With this in mind, and with the bevy of options available to Russell (including calling his own number), I don't think it's unreasonable for Russell to have statistical numbers similar to what Nick Florence put up in 2012. Combine those kind of numbers with a great W-L record and a nationally prominent Baylor #brand, and we could see another year of something special in Waco.