209 yards on 38 attempts would be a good night for many teams, even on a dry field. For Baylor fans, it felt as if someone had substituted diesel for our high octane jet fuel. Wet footballs and a sloppy track might account for some of our problems, but when I watched the game it just felt like the off night that we'd all been expecting (and praying wouldn't happen against a top 15 team). I suppose our prayers were answered, because we were able to easily handle the Cyclones with a pass offense stuck in first gear.

Target Obscured. 2 for 11. An interception. 18% completion rate. 66 yards. 6 yards per target. The deep ball simply wasn't there last Saturday. Corey Coleman absolutely stole one completion of 36 yards for a touchdown, but otherwise we looked more like an overmatched Baylor opponent desperately heaving it deep and hoping for a PI call.

Misfire v2.0. Baylor Nation is still waiting for KD Cannon to find success on the deep routes. He caught none of his 5 deep targets last week, bringing his season total to 2 of 15 on targets of over 20 yards. As we move into the heart of our schedule, we really need for him to get untracked. We also need to see him do something that the aforementioned CC does, and that's fight for and win contested passes. Can anyone remember a deep throw that Cannon took away from a DB? It's not a talent issue, but perhaps an infusion of CC's anger/mean-streak/drive/will is in order.

Finding the Target. The Baylor offense has not been very successful throwing it deep and right: 5 for 20 with a 10.6 yard per target average. 3 of the season's 6 picks were in that zone, with only 4 touchdowns. In contrast, our other deep balls average almost 17 yards a target and have resulted in 10 touchdowns and no interceptions. I honestly don't know what's going on here, but I cringe whenever the ball goes down that sideline.

Mixing it up. Coleman and Cannon dominate our first half receiving targets. Against the Cyclones and Mountaineers, a stunning 73% of our targets (41 of 56) were to our top two receivers. Jay Lee has been relatively quiet the last two games, and Platt, Zamora and Hall have shared time at the fourth and fifth receiver slots.

In the development of air power, one has to look ahead and not backward and figure out what is going to happen.— Brigadier General William 'Billy' Mitchell

Like all of us, I mourn the loss of Seth Russell and pray for his restoration to full health. We have a new pilot at the controls, and I look forward to seeing what Jarrett Stidham's accession does to these charts. Will we see new patterns emerge as he learns the ins and outs of the Briles' attack? Is this truly a system in which we plug and play new quarterbacks, with little real variation in our target? Will we finally see the fabled Jabberwock--the short throw over the middle? I'll let you know after we've taken down KState. 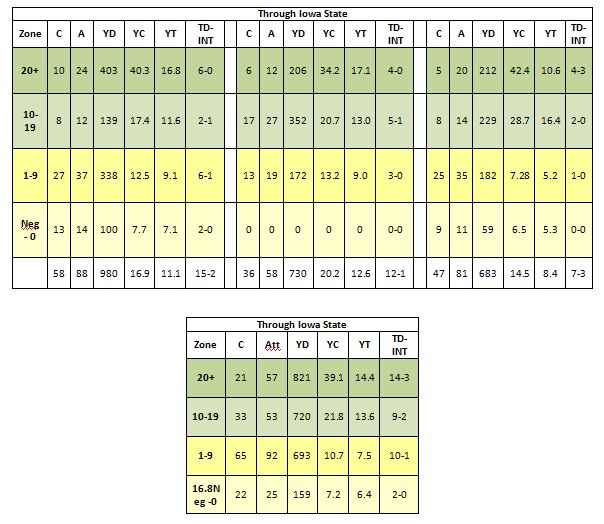 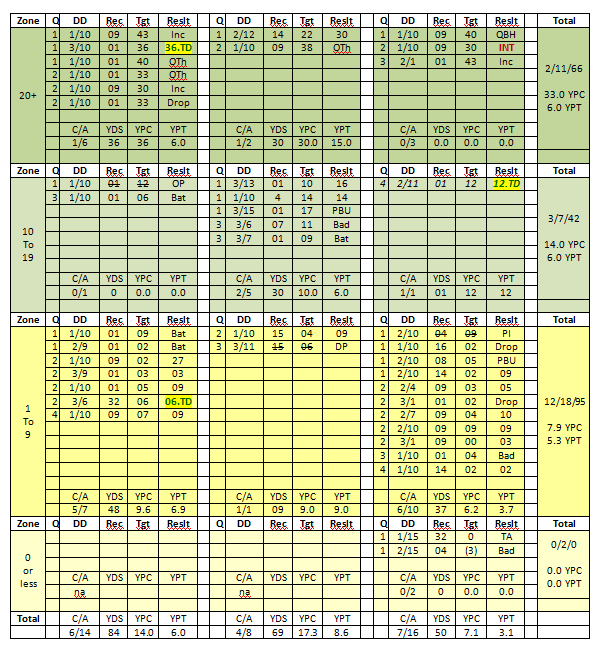