Since 2008, how has Baylor football fared in its various uniform combinations?

Before I get started let me reassure you: this is a very important topic. There's a reason we do uniform predictions every week and sweat over what the team might be wearing. We're Americans. We like to look good. Baylor under Art Briles has made dressing well a priority, as shown through a ridiculous number of new helmets and jersey combinations since he's taken over.

So, here's what we're going to do. First, I'm going to take us through the various uniform options Nike has given us since Coach Briles took the helm of the program, with perhaps light commentary sprinkled in like a dash of parsley on a freshly broiled salmon. Next, we'll look at how the team has fared in its helmet choices and uniform combinations. Finally, I'll offer you some questions to ponder as we move forward.

Under Guy Morriss, the team had a green home uniform and white road uniform. There were two helmets available: a Vegas gold shell with a single green stripe and a green BU on the side, as well as a shiny green helmet with a white BU on the side. Gold, green, and white pants were available, as well. Observe: 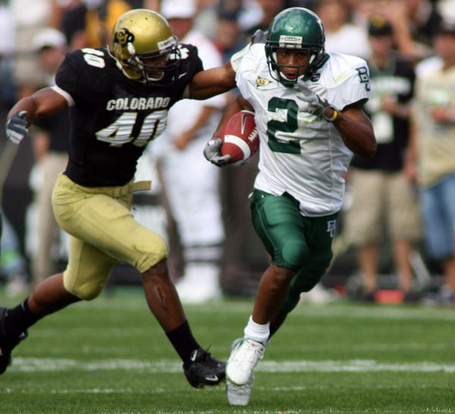 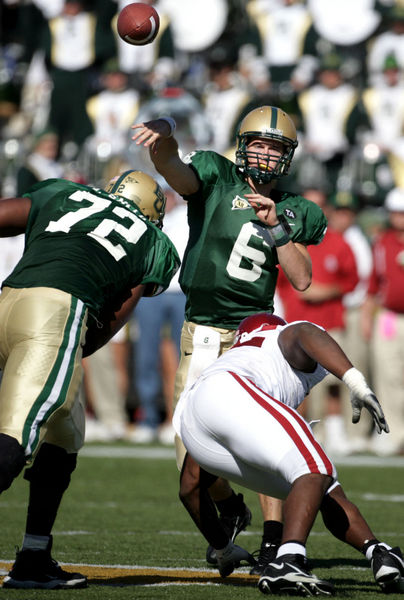 The team lost no matter what it wore. The end.

For TGCAB's first season in Waco, there were a number of changes implemented in the uniform. Gone were the shiny green helmets of the Guy Morriss era; no more was the single-green-stripe Vegas gold shell with an green BU decal. Instead, the team wore for the entire season a slight modification of the gold helmet worn from 1972-1992, up to that point the best era in Baylor football history. Whereas that helmet featured a thick green stripe sandwiched by two smaller white stripes, the new helmet had these three stripes more evenly-sized and the colors reversed. This, of course, is the gold helmet the team wears today and is the most-worn helmet in the Art Briles era, with 45 appearances in 77 games to date. (That we wore it for all 12 games in 2008 helps that count.) 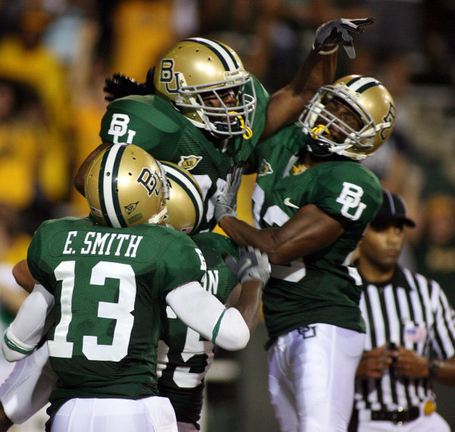 The jerseys and pants for 2008 were holdovers from the Morriss era: solid green or white with the BU logo on the sleeve, with gold, green, or white pants available. However, after ditching the green helmets, the team did not wear its green pants during the season. 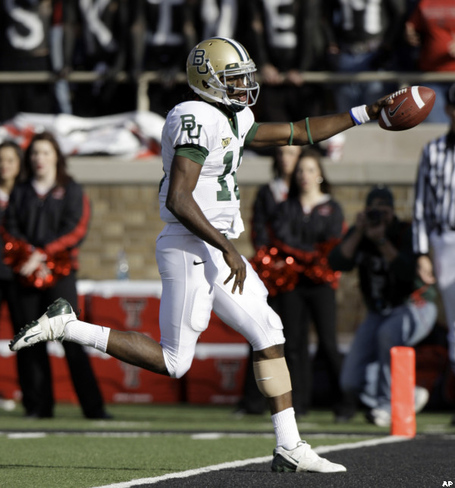 With the biennial uniform redesign from Nike, the team received new digs for the highly-anticipated sophomore season of Robert Griffin III, as well as a new helmet. The new white helmet featured two green stripes and a green, outline-less BU decal on the side. The Bears would wear this helmet through the 2012 season. According to this great review of Baylor helmets, this was the first time team wore white helmets since the Bill Beall years, which we should all know from our preseason football history reviews did not go well. For this reason and perhaps others, there have long been whispers in the shadowy corners of Baylor fandom that white helmets are "cursed." I suppose we shall see. The team went 1-3 in its new hats that year, although 2 of those games came with true freshman Nick Florence at the helm.

As for the jerseys and pants, Nike introduced a modern look to BU football. BAYLOR was now heavily featured on the front of both the home green and road white jerseys, and a thin line went up the sides. Numbers and text on both jerseys were outlined in black. The white road jerseys also featured Vegas gold accents. White, gold, and green pants were available, each with a stripe which widened as it went down the leg. 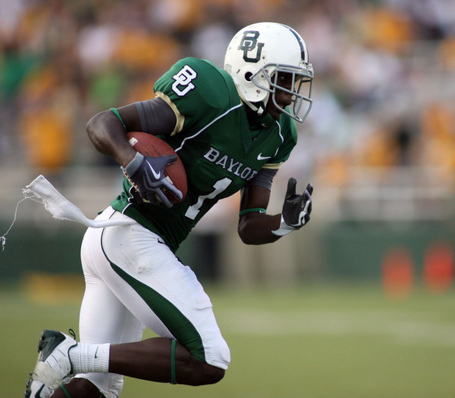 Because it has to be noted, the 2009 team wore a gold-gold-gold design for its game at home against Oklahoma State. This is a family-friendly site, so I won't be posting or linking to any image of it. You can go look yourself.

The team kept the same uniforms for the 2010 season, which featured its first appearance in a bowl in a decade and a half. In the fourteen home games (twelve in Waco, one in Dallas, and one in Houston), the team wore gold-green-gold and white-green-white five times apiece, gold-green-white twice, and gold-gold-gold and gold-green-green once each. This the last season the team has worn a gold-green-white combination of a regular-rotating uniform set, which for much of Baylor's history was its default home combination.

Although the "stormtrooper" combination of white-white-white was available, the team most often wore a gold-white-gold set on the road. 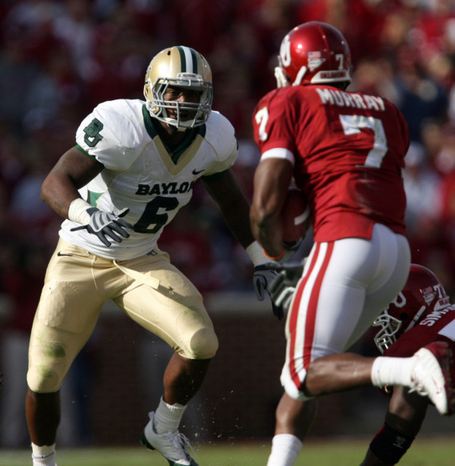 For the biennial redesign, Nike removed some of the modern elements of the previous jersey, including the black number outlines and the thin lines moving up the obliques. The green of the home jersey was modified to a more muted shade, and the numbers and logos now featured gold outlines. Furthermore, the jersey featured a visible seam on the shoulder pads, in a pattern that may or may not have supposed to resemble a bear claw.*

*An actual bear claw, not the doughnut.

If the jerseys returned to a more traditional look, the pants perhaps went the other way, now featuring two... streaking (?) lines toward the front of the leg as shown: 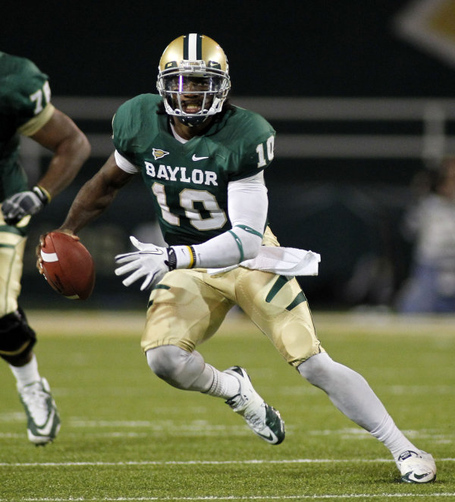 These pants came in gold and white varieties, with green stripes in both cases. Three times during the 2011 and 2012 seasons the team wore green pants, but in each case these were the pants from the 2009-2010 uniform collection. As such, they were a slightly brighter shade of green than the jersey, and in this reporter's opinion did not look good.

In the 2011 season, the team wore its green jerseys nine times, including two neutral site games. Of these, four were the now-traditional gold-green-gold combo, two were white-green-white, one white-green-green (ick), one gold-green-green, and the last a new uniform combination, because it featured a new helmet: 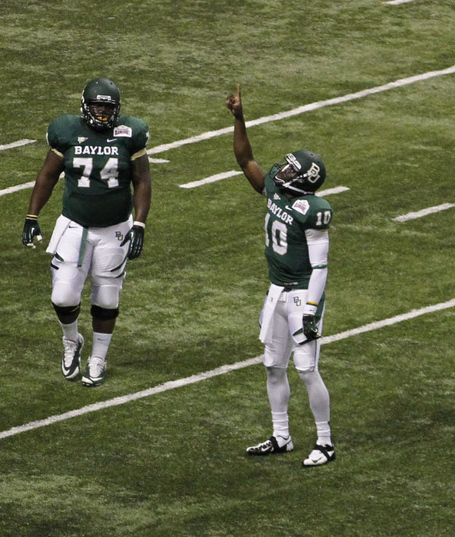 For the Alamo Bowl against the University of Washington, Nike gave the team a matte green helmet design, featuring a white BU outlined in gold. The team would wear this helmet again for the 2012 Holiday Bowl. So, the team has worn a matte green helmet in both of its bowl wins under Art Briles. Maybe that's a coincidence. But maybe it isn't. 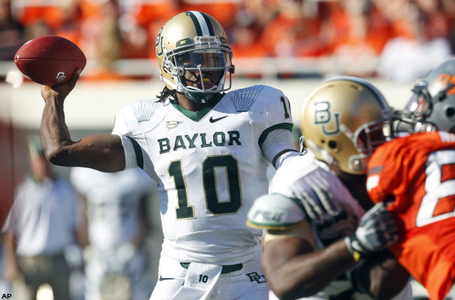 Although Nike would not fully redesign the BU uniforms for another year, the sudden high profile of the program (I'm guessing) led them to give the team a new uniform color, in order to make the Nick Florence-led Bears feral warriors of the night: 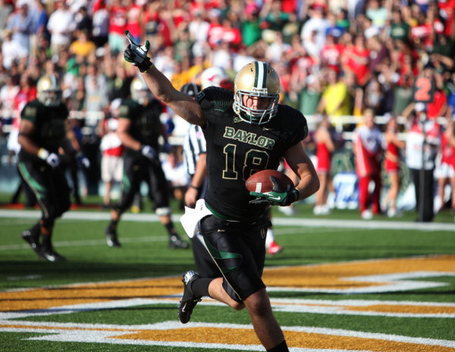 As you can see from the photo, the team also began to wear black pants. The addition of black for 2012 began the first of two back-to-back years in which the team only wore gold-green-gold once, on Homecoming. The team wore black jerseys at home three times, twice with black pants and once with gold pants. The team also wore gold-black-black on the road against Louisiana-Monroe, the only time in the Art Briles era the team has worn a dark jersey in a true road game. Otherwise on the road, the team wore a different combination every game.

For the 2013 season, the team received the biggest redesign of its jerseys ever before done, with new jerseys, pants, and helmets. For the first time, the team's green home jerseys featured Vegas gold numbers, in a new proprietary Nike font. Both the home and road jerseys featured a bear claw pattern. Otherwise, the jersey colors remained the same: black, green, and white, with gold as an additional pants color. The pants featured a modern "half" stripe pattern, which only covered half the leg vertically.

While the team retained its gold helmet, it modified the white helmet in use since 2009 by removing the two green stripes and by outlining the BU on the side in Vegas gold: 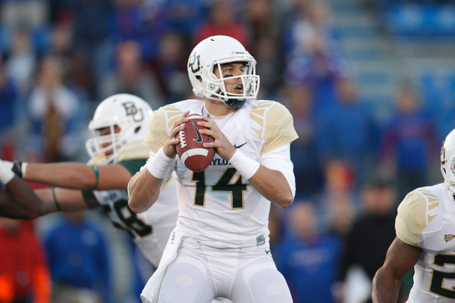 For the matte green helmet, the colors of the BU were reversed: 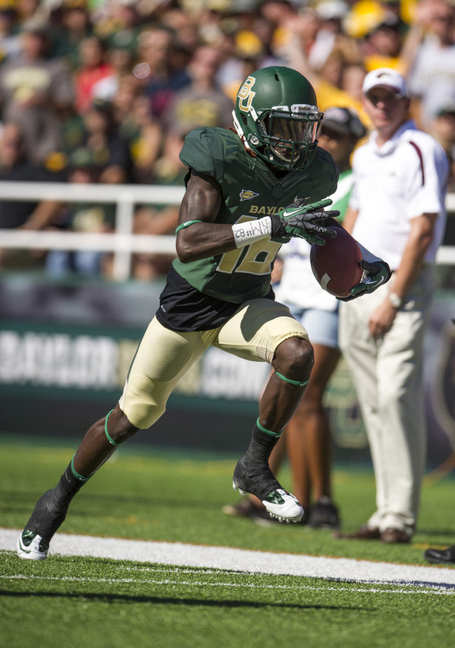 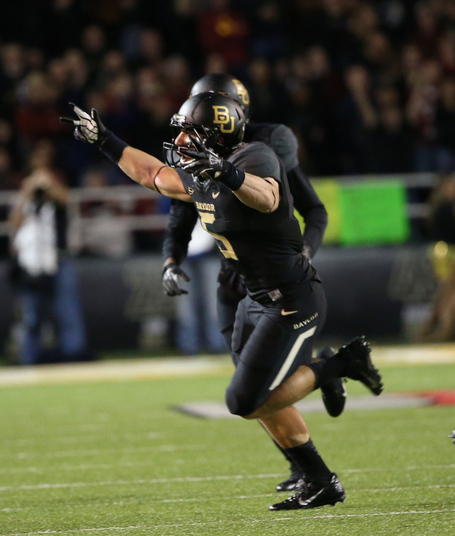 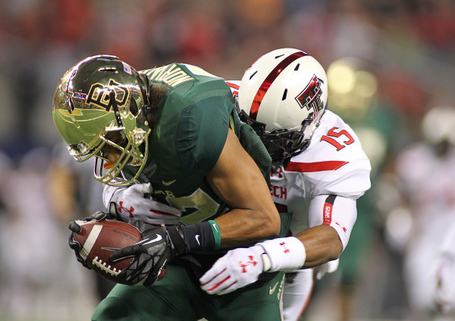 Finally, as a tribute to the six decades spent at Floyd Casey Stadium, the team wore a throwback uniform, featuring a plain "old gold" helmet shell, plain dark green jerseys, and white pants with a green and gold stripe on the side: 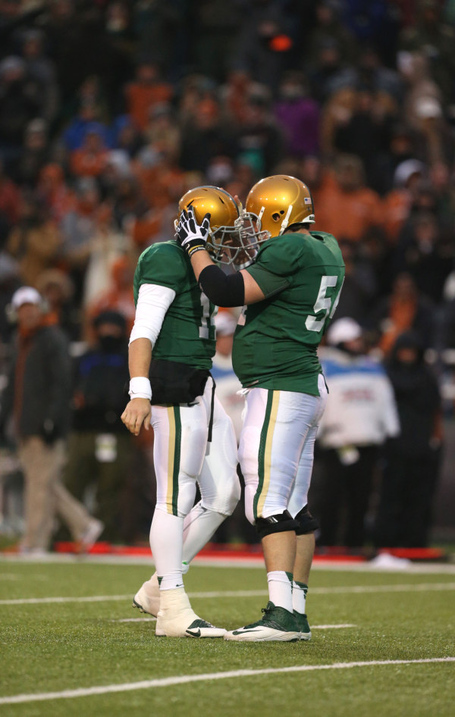 The team wore a different uniform combination for every home game, not counting the repeated chrome-black-black for the neutral-site Fiesta Bowl. On the road, the team wore its "stormtrooper" combination twice, but otherwise differed with each week.

I've tabulated the W/L by uniform combination above. Now, I don't mean to say that the uniform a team wears affects their performance. But fans are a superstitious bunch. I will not tabulate it by jersey color; as this is dictated almost completely by whether the team is playing at home, where they have played very well under Art Briles.

*Includes the old gold shell worn in the 2013 Texas game.

Baylor's overall record in the Art Briles era is 45-32 (.584). It is .640 since 2009, after a year (2008) in which the team only had one helmet option. Despite the overall impressive record of the team, BU has a losing record in its white helmets. I'm not saying there's such things as curses. But if there were...

Other results follow, sorted by total times worn and then by winning percentage:

* Includes the throwback uniform worn in the 2013 Texas game.

In some respects, the results can be misleading. The team is 27-19 (.586) in gold helmets, but gold was all the team wore in 2008, when it wasn't very good anyway. Perhaps nothing can be taken away from this study, other than wonder at how great the research was. However, the team is 4-4 in a white-green-white combination, which is the poorest-performing home combination with more than one game played in it. Additionally, the team has played remarkably well with its matte green helmets.

More than anything, though, this study should serve as a warning to anyone who predicts or desires to see the team wear a white jersey at home. It's not going to happen. Stop.

1) With the above information now known, which uniform do you wish to see worn more?

2) Which uniform do you wish to see worn less?

3) Nike will be redesigning our uniforms for the 2015 football season. What do you hope to see them do with that opportunity?

4) Should I try to make this a series on uniforms? If so, what would you like to see in the future?