Week 5 was the start of Big 12 play in earnest with 3 big 12 match-ups and 8 teams overall in action. Oklahoma and West Virginia took the week off and were watching the weekend's slate of games from the comfort of their field houses.  The only Big 12 drama leading up to the weekend was the resignation of Texas Tech's defensive coordinator due to off the field issues.   Tech has seen plenty of on the field defensive issues as well though.  Typically losing a coordinator during the season is a bad thing, but with the way the Tech defense has been playing there is only one way to go and that is up.

Week 5 also brought in a fairly lopsided slate with the lowest spread coming in at the Texas v. Kansas game with Texas at -12.  As with that match the rest of the weekend saw clear favorites taking on clear underdogs.  That was how things went on the weekend, the favorites all won, generally in convincing fashion and covering the spreads for the most part.

This game reminded me of a Clint Eastwood spaghetti western.  There was some good, some bad and then it got ugly.  As for the good, this game was an exciting offensive shootout.  That is what was expected, and that is what this game delivered.  The Poke's Daxx Garman was lethal at long range and was slinging the ball all over the field.  So was Davis Webb.  In fact, they threw 4 touchdown passes a piece.  Tyreek Hill continued to be all over the place in his role as "emerging threat from anywhere".   He caught a bomb from the slot position and took it 50 yards to the house late in the game and did some nifty running out of the backfield.  Both teams put up over 500 yards offense, combined for 80 points and it was a 7-point game going into the 4th quarter.  By anyone's standards it was a pretty entertaining game from that perspective.

On the bad side, the defenses were run out of the house; both of them.  When your defense gives up 35 points and over 500 yards offense, you normally lose that game.  Unless... the other guy's defense gives up 45 points and over 500 yards, then you still have a chance.  The offenses were good, but they were far from flawless, both struggled at times during this game and especially in the first half there was some sloppy play.  To go along with their 4 touchdowns each, Webb and Garmann also had 2 picks each.  Throw in another late fumble then scramble then poor-decision interception by Patrick Mahomes in relief of an injured Webb and that is 5 gimmes in this game.  Webb left the game after a seemingly innocuous tackle on the field and went straight to the locker room for treatment.  The injury was apparently to his non-throwing shoulder and it will remain to be seen how serious it is.

And then it got ugly.  26 for 287 was the stat line for penalties.  Holy cow, that is a lot and both teams were culpable.  To put that in perspective, Iowa State's offense is averaging 303 yards a game and Texas' is averaging 311.  The penalties in this game almost equaled those two team's entire offensive output per game.  Tech's battle with penalties is well documented and they had 16 hankies tossed for 158 yards.  The pokes had 10 for 129 yards.  With 3 turnovers, an injured Davis Webb, one of the worst penalty track records in the country and a new defensive coordinator, things are not looking rosy for Tech.  In the words of Tuco, "Adios, Blondie - No bowl game for you."

OSU on the other hand is quietly exceeding expectations and should be able to finish in the up upper half of the conference.  They are very likely to be a spoiler at some point in the season as well.

The Iron Skillet stays safely in Fort Worth for another year after a dominating performance of TCU over a surprisingly inept SMU team.  Trevone Boykin continues to develop into a potent dual threat quarterback throwing for 280 yards and 4 touchdowns as well as running for 62 yards and scoring two more TDs on the ground.  BJ Catalon had a 100-yard day rushing and Matt Joeckel saw some action late at QB during mop up duty.  The Frog defense was also smothering and sacked first-time SMU starter Garrett Krstich 7 times.  The Frog D held to Pony offense to a measly 245 yards overall and 0 points scored.

It really is hard to believe how bad SMU has gotten in such a short time after back to back 8-4 seasons just two years ago, but it is undeniable that TCU is a much improved team than the 4-8 squad from last year.  They have only played 3 games and have rolled over weak competition, but a 56-0 shutout is extremely impressive even if it is over a struggling team.  TCU will get a chance to prove that it is a legitimate contender in the Big 12 with a home game against OU next week and a trip to Waco the week after.

UTEP proved that they were no typical out of conference patsy with a near upset victory over Texas Tech earlier in the season, but there was no drama of that sort on Saturday against K-State.  The Snydercats sprinted to a 31-0 halftime lead and this game was never competitive.  K-State had plenty of motivation in this one after losing a heartbreaker to Auburn in the previous week but additional motivation was held by the K-State's venerable coach Snyder. Snyder came into the game in a bad mood after being told by Big 12 officials that he could no longer wear his vintage purple bowl windbreakers for all bowls that K-State has played in that are no longer associated with the conference.  Well of course that sent coach scrambling to find something to wear to the game after half of his wardrobe had been banned.  He ended up selecting a non-purple jumper but was clearly uncomfortable in it on the sidelines.  In fact the camera crew couldn't find him for much of the 1st quarter...

The K-State defense showed no ill effect from the wardrobe drama on the sidelines though and held the Miners to 1 first down and 23 total yards in the first half in a dominant effort.  The Miners only got on the board late in the game after getting down by 45 points.  Charles Jones had 3 touchdowns and 76 yards on the ground and was impressive in a rout-shortened outing.  Jake Waters had a solid game as well throwing for 209 yards and a TD.  Tyler Lockett also chipped in with a punt return for a touchdown in the 2nd quarter.

In a battle between two of the Big 12's worst offensive teams, the Horns were able to pull out a hard fought victory over Kansas 23-0.  Even as the beneficiary of 4 Jayhawk interceptions thrown by Montell Cozart, the Texas offense was only able to score on 4 drives and this game was still competitive into the 4th quarter.  Texas had 329 yards of offense and Kansas had 313.  Combined the teams were able to narrowly outperform Baylor's offensive output in Ames on Saturday night.  Tyrone Swoopes continued to play reasonably well despite an offensive line that played as if they spent the 12 hours leading up to the game on 6th Street and a running game that only managed 111 yards, 30 of which came on a reverse to Amanti Foreman.  To go along with the 4 Cozart picks, the Jayhawks also went 0-3 on 4th down tries.  One of the 4th down attempts was from the Texas 5 yardline in the 3rd quarter as the Jayhawks tried to pull within a touchdown, but they were unable to punch the ball in after a 1st and goal.  That was Kansas' only scoring threat.

The season continues to get longer for Kansas and with West Virginia and Oklahoma State looming, it doesn't appear that it will get any easier.  Texas' next two weeks are even tougher with a visit from Baylor next week and the Red River Rivalry the week after against Oklahoma.  If Texas continues playing the way that did in this game, they will fall to 2-4 and be on a serious uphill march to make a bowl game.

Baylor passed its first road test in the twilight zone of Jack Trice stadium and dismissing the natural grass conspiracy theorists.  The Cyclones were the toughest test yet for the Bears but with a 35-7 halftime lead, there was never any doubt.

A lot will be revealed next week with TCU visiting Oklahoma and Baylor visiting Texas.  On paper both teams should win after strong victories over weaker opponents leading up to this point in the season, but road games are always tough regardless of the competition.  West Virginia is the best 2-2 team in the country and should get back on the winning track against Kansas and OSU will visit Iowa State in a game in which they will be clearly favored.

The Bears need to just keep taking care of business, and with Oakman, Billings and co. going against UT's shambolic offensive line that is a likely scenario.  Wins in Austin are hard to come by though so the Bears will need to be on their game regardless. 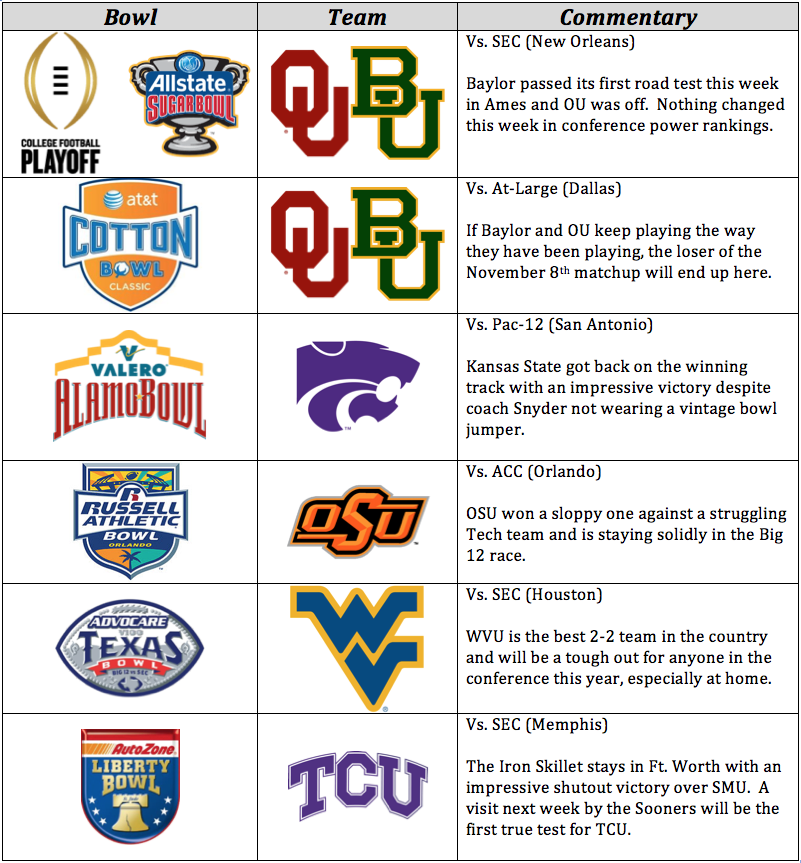