Below are this week's cumulative predictions from participants in the Predict the Score.  On the right, I've highlighted some individuals who predict the biggest win or loss, or the highest or lowest total.

If you want to see everyone's predictions, go to this google spreadsheet.

Note that I'll exclude bizarre votes from the cumulative predictions if they are completely egregious.  The fine folks over at Wide Right & Natty Lite brought over their special bran of tomfoolery and attempted to undervote our contest into oblivion.  I have responded in kind, by using my draconian, self-appointed powers to ignore all of the undervotes.  A special commendation goes to those undervoters who attempted to confuse me by picking enormous Baylor wins.  But my favorite undervotes this week came from TexAg, who has Iowa State winning by such a large margin that Google Docs cannot even calculate the margin of victory, the multiple voters who used scientific notation to indicate Iowa State's points scored in a blowout cyclones win, and Cyclonestateofmind, who has Iowa State winning, 69 to π.

After the game, we'll post a summary of the results and who did the best (and worst), as well as the cumulative standings.  The columns on the right only reflect Baylor fan predictions. 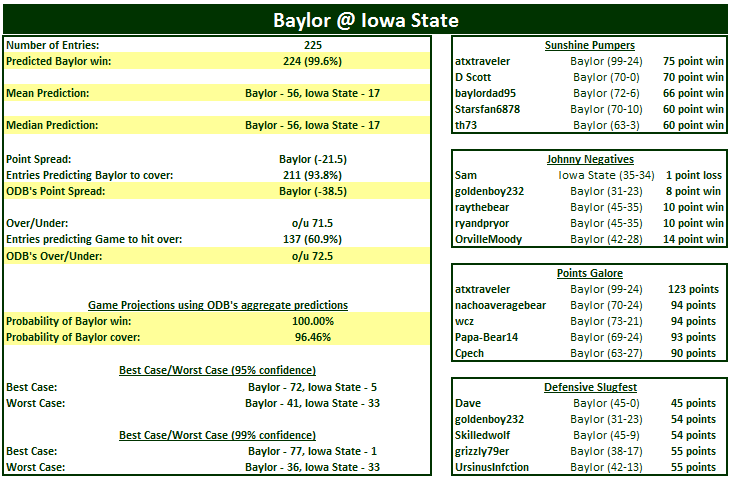 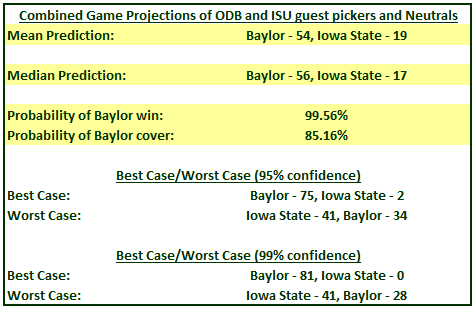 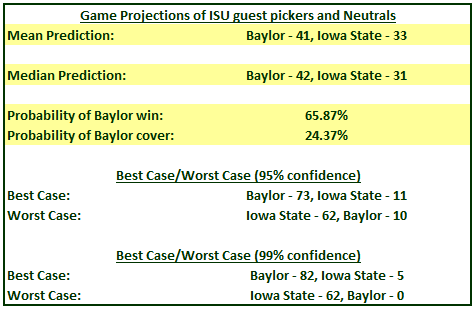 In the interest of full disclosure, I have us winning 55-17.