Week 4 was a slow one in the Big 12 with only 4 teams in action in 3 games.  The Baylor Bears were resting in Waco, getting their high(er) octane offense healed up and ready to go to Ames next week.  Coach Briles announced this week that Antwan Goodley, Corey Coleman and Devin Chafin will all be back for the Iowa State game.  Clay Fuller is a probable/maybe and Levi Norwood will not play.  Although the offense hasn't skipped a beat, having all of these arrows back in the quiver should prove to be a formidable challenge for the Iowa State defense.

Week 4 did contain some interesting matchups though starting Thursday night with Auburn visiting Kansas State trying to snap a 30 year drought of winning on the road against a non-conference, ranked foe.  Oklahoma made the long trip to Morgantown to see if Clint Trickett and the West Virginia Mountaineers are for real this season in both team's conference opener and Kansas hosted Central Michigan in a sleeper in Lawrence.

What a game this ended up being.  Kansas State opening up the game by kicking the ball out of bounds and giving Auburn great field position.  It didn't matter though, the Kansas State defense held strong and forced Auburn to punt.  The Kansas State offense then committed a rare fumble on their first series that gave Auburn the ball on the Kansas State 21.  The defense held again and Auburn came away with only a field goal.  This would become a theme of the game.  The Kansas State defense bringing the wood to Auburn but special teams and offensive mistakes not only keeping Auburn in the game, but ultimately giving them the win.  On the next series, Kansas State drove the ball right down Auburn's throat and from the 1-yard line Jake Waters pitched a sure touchdown pass to Tyler Lockett in the endzone.  What ended up not being so sure on the play were Lockett's hands.  Arguably one of the best receivers in the conference, he bobbled the ball, which was ultimately picked off.  On Auburn's ensuing drive after the touchback, the K-State defense held again.  After a 30-yard punt return by Lockett, the Wildcats drove into position to score, but missed a 41-yard field goal at the end of the quarter.  So at the end of the 1st, Auburn had 49 yards of offense and a 3 point lead.  It could have just as easily been a 10-point deficit.  Kansas State had two kicking errors and 2 turnovers in the first quarter alone.  The defense was absolutely rocking the Tigers though and the game still had the feel that when K State sorted out their uncharacteristic mistakes, they would go on to win.

The second quarter saw both teams trade touchdowns to bring the score to 10-7 but late in the half K-State had the ball and was driving.  With 22 seconds to go in the half, The Cats were on the Auburn 13-yard line, trying to go ahead or at least tie the game.  With timeouts still in his pocket Coach Snyder elected to drop Jake Waters back for an attempt at the end zone.  Waters pump faked but dropped the ball in traffic.  After a mad scramble, the Cats ended up with the ball after a 12-yard loss with 4 seconds on the clock.  The field goal unit came on for a routine 42-yarder and missed again.  Actual halftime score Auburn 10 K-State 7.  Normalized halftime score:  Auburn 7 K-State 20.  K-State had missed 2 field goals, fumbled in their own red-zone giving Auburn an easy field goal and bobbled a sure touchdown pass that ended up as an interception.  Due to the amazing efforts of the defense though, the Wildcats were still in this one down only by 3.

The third quarter was a defensive stalemate with the only scoring attempt being yet another missed field goal by Kansas State, this time from the Auburn 5 yard line.  At a minimum this game would have been tied at 10 and with a typical mistake free performance from the Snydercats, the score would have been 23-7 and approaching a Kansas State blowout, especially given the way the K-State defense was playing.  Auburn kept fighting though and opened the fourth quarter with a touchdown moving the score to 17-7.  On the next series Waters threw his second interception of the game at midfield which ended in another Auburn field goal: 20-7.  K-State drove the ball for a touchdown with 2:39 left in the game to draw within 6, but on the ensuing drive, Auburn was able to run, run, run the clock and escaped Manhattan with a hard-fought 6 point win.

This was a very uncharacteristic, mistake-ridden game by the Snydercats and rather than making a major conference strength statement on national TV, they let Auburn escape with a win and the SEC stayed comfortably in the conference pole position.

Wins have not come easily for Kansas this year and even though this game was an overall sloppy, inept offensive performance by both teams, Kansas pulled out a victory.  In all honesty though there were some fireworks in this game.  On the first play from scrimmage, Kansas' Tony Pierson took the ball 74 yards for a touchdown.  Unfortunately for Kansas, they would go another 46 minutes and 19 seconds before scoring another touchdown.  Neither team could really sustain much offense but the Chippewas kept chipping away at the Kansas lead and at the end of the third quarter the game was tied at 10.

Early in the fourth, Kansas finally scored another 6-pointer on a 60-yard bomb from Montell Cozart to Justin McCay.  Kansas added another score late on a 30-yard pass from Cozart to Corey Avery and ultimately finished with a 24 - 10 advantage.  The teams combined to have 4 turnovers and taking away the long scoring plays, both teams combined for only 466 yards of total offense.  Pretty ugly stuff, but Kansas comes away with a much-needed win.

This one started out as a barn-burner in Morgantown but ended up with Oklahoma slowly pulling away in the 2nd half with a dominant performance on the ground.  The first quarter was a bit slow with both teams feeling each other out and late in the quarter Oklahoma held a 3-point lead.  West Virginia's Clint Trickett changed that by connecting with Kevin White for a 68-yard strike to take the lead 7-3.  That series kicked off a torrid stretch of play that saw both teams score multiple times to finish up the half at 24 all.  The first score in the 2nd quarter came from a Josh Lambert 54-yard field goal to make the score 10-3.  Two minutes later quarterback Trevor Knight caught a trick-o-rific double reverse pitch-black pass thrown by Durron Neal.  One minute after that Trickett connected with Mario Alford to take the lead back at 17-10.  On the next series, true freshman Samaje Perine, playing for an injured Keith Ford, began to establish his will in the trenches and drove in another touchdown with 3:22 to play in the half.  In other gutsy move, Bob Stoops elected to try an onside kick, which was very recoverable if not for an inadvertent kick from a fellow defender.   West Virginia, with great field position, made Oklahoma pay on a Rushel Shell 5 yard touchdown dive 2 minutes later.  It appeared that the Eers would take a 7-point lead into halftime at 24-17, but OU's special teams had other ideas.  On the kickoff after the touchdown, Alex Ross scampered 100 yards for a touchdown to knot the score at 24.

At that point in the game the Sooners really seemed desperate.  They had gone for an onside kick, had scored on a pitch-back reverse quarterback reception for a touchdown and had a 100-yard kickoff return to keep the game tied.  The supposedly world beating defense seemed to be struggling against the Trickett lead offense of West Virginia, giving up almost 300 yards in the first half alone.

The 2nd half was a different story though.  Samaje Perine began to put any upset thoughts out of the heads of the Mountaineer fans with a grindingly effective performance.  He scored 3 touchdowns in the second half and finished with 242 yards and 4 touchdowns overall.  The Oklahoma defense also made adjustments and finally started to smother the Mountaineer offensive attack.  After a dominant 2nd half, the Sooners left Morgantown with a 45-33 win.

On a Saturday where several top-10 teams struggled, and most of the Big 12 was out of action, the middle of the Big 12 conference became even murkier with the top and bottom still standing pat.  Oklahoma passed a crucial road-test to maintain position in the top echelon.  West Virginia is only 2-2 but both losses were to top 5 teams and were hard fought affairs.  Kansas State looked uncharacteristically sloppy but still could have won against a top 10 SEC team as well.

At this point it still boils down to November 8th in Norman to see who the Big 12's representative will be in the inaugural college football playoff.  The rest of the bowl picture is as hazy as the Cigar Room at Javier's on a Saturday night.  Head to head matchups between OSU, WVU, TCU and KSU will determine which bowls that each play in. 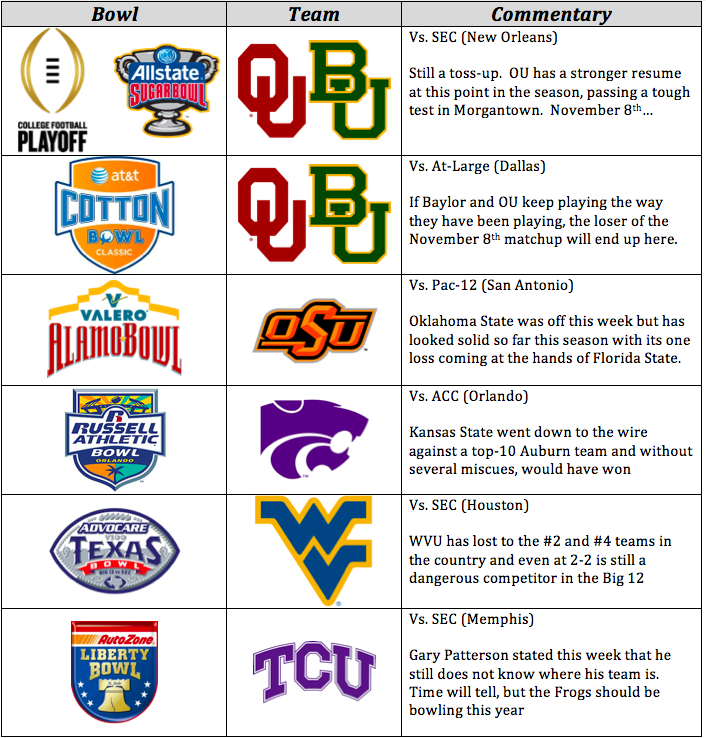