The weekend started off Friday night with a Bryce Petty infused Baylor offense having a field day in New York versus a blacked-out Buffalo.  On Saturday the Big 12 had a great showing against the other power 5 conferences and went 6-3 overall.  Conference records were as follows:

The ACC loss was suffered by Kansas at the hands of Duke and the Pac 12 loss was a close one to #12 UCLA by Texas.  All things considered the Big 12 solidified its standings amongst the power conferences and the B1G continued its slide, clearly in the #5 slot.  B1G now has 15 losses as a conference after week 3 which are more than the total losses of the Pac 12 and Big 12 combined.  In terms of conference strength, things are definitely starting take shape with the Big 12 now having enough games again power 5 conference opponents to shrug off the weak schedule arguments.  The Big 12 at this point in the season is 4-5 against the other top conferences with 3 losses taken at the hands of the #1, #2 and #12 teams in the nation by an average of 6 points.  Not bad going into league play.

Clint Trickett continues to put up great numbers passing for 511 yards and 4 TDs against Maryland, and exacted some sweet revenge for the 37-0 drubbing received at the hands of the Terps last year.  Trickett's game performance was second all-time for the Mountaineers behind only Geno Smith'g big day against Baylor in '12.  Kevin White had 216 receiving yards and is emerging as the go-to target for Trickett and is the leading receiver for West Virginia on the season.

The ‘Eer defense gave up the exact same number of points as last year, and tried their best to give this game away late, giving up 21 straight points and watching a 28-6 yawner become a 28-27 nail biter.  Those 21 points came on passes of 77 and 26 yards and run of 75 yards.  Not exactly the type of play to be giving up against stiff competition.  The offense contributed to the Terp effort as well, giving up 4 turnovers and having a field goal blocked otherwise this game would have been a serious blowout.

Late in the game after a back and forth battle of trading scores, Maryland tied it at 37. The Mountaineer offense mounted a closing drive of 65 yards that allowed Josh Lambert to slot home the game winning field goal on the last play of the game.  This win helped to establish the Big 12 over the B1G in head to head competition.

This was another blow for B1G credibility.  Iowa State was 0-2 coming into the Cy-Hawk showdown and was a heavy underdog to 2-0 Iowa.  Credit has to be given to the Iowa State coaching staff, the Cyclones never give up - no matter what.  They were down 14-3 in this match at halftime with Devondrick Nealy fumbling on the goal line late in the first half on what would have been a sure touchdown, completely taking the wind out of the Iowa State sails.  After an FCS blowout to start the season and a heartbreaking loss last week to Kansas State with yet another dodgy call contributing, the Cyclones could have easily given up.

Instead, they stormed out after the break and scored 14 unanswered points to take a 17-14 lead in the fourth quarter.  After Iowa tied the score at 17 late, State took over with 4 minutes to play and commenced the deciding drive.  With 4 seconds to play, the Cyclones lined up for a tie-breaking field goal, but unfortunately for Iowa State, Cole Netten hooked the ball and missed from 42 yards out.  Unfortunately for Iowa, they had iced Netten a fraction before the ball was snapped with a timeout and the play did not count.  Given another try, Netten drilled it through the uprights for a game winner.  The Cy-Hawk trophy is headed to Ames and Iowa State has their first win of the season.

Tech's run of living on the edge and eking out wins is over with Arkansas soundly defeating the Red Raiders in Lubbock.  Tech's run defense was utterly exposed as they gave up 438 yards on the ground to a grinding Hog attack.  The Hogs held the ball over 40 minutes in the contest and absolutely smashed the Tech defense as flat as a tortilla in the second half.  At halftime, the game was close at 28 - 21 in Arkansas' favor, but with the Tech defense on the field for 24 minutes of the 2nd half, they were out of gas by the fourth quarter and it showed.

The Red Raiders also gave up 3 turnovers and 60 yards in penalties to contribute to the loss.  Davis Webb had a pedestrian day, throwing for 252 yards, 3 scores and a pair of interceptions.

This was a blemish in the Big 12's big weekend against power 5 conferences. This was a winnable game at home for Tech, but unfortunately they got taken behind the woodshed by a physical opponent playing smash-mouth football.

Kansas was completely outmatched by Duke giving up 331 yards on the ground in a 41-3 rout in Durham.  Shaun Hill set a Duke single game record by rushing for 245 yards and scoring on plays of 69, 68, and 45 yards.  Hill was listed as the third string back on the Duke depth chart and on his first carry from scrimmage raced 69 yards to pay dirt.  Not only was it his first carry of the game, it was the first carry of his career.  If he were smart he would be sending the Kansas defensive line some all-you-can-eat vouchers to the Golden Corral for making him look so good.

The Kansas defense leaked like a cheap air mattress throughout, giving up 17 unanswered points to start the game and 21 in a row to finish it.  Montell Cozart was limited to 89 yards passing and 2 interceptions for Kansas and the Jayhawks were never in this one.  It might be a long season for Kansas if they don't make some drastic improvement.

TCU's defense came up big and Trevone Boykin had a banner day for the Frogs in this convincing victory over the Golden Gophers of Minnesota.  Boykin threw for 258 yards and 2 touchdowns and added 92 yards on the ground.   Josh Doctson had 2 TD catches both on corner fade routs with the second culminating in a one-handed circus catch that was must-see TV.

The Gophers were outgained 427 yards to 268 and gave up 5 turnovers in the contest.  TCU has solidified itself as a bowl contender and a possible Big 12 dark horse with this convincing victory.  It also capped off a perfect 3-0 day against the B1G.

UTSA certainly is punching above their weight class this season, but in the end were no match for a surging Oklahoma State.  Even without JW Walsh the Cowboys rolled to a solid victory over an above average Roadrunner squad.  Daxx Garman had a solid day throwing for 315 yards and 2 TDs with most of those yards coming in 30+ yard chunks.  Desmond Roland ran for 95 yards as well and was the leading rusher for the game.  The only mildly surprising aspect of this game was that Tyreek Hill wasn't much of a factor, but then again, he wasn't really needed.

Oklahoma State finishes the week with a national ranking and a slate of Tech, Iowa State and Kansas next up.  The Cowboys could find themselves 5-1 before hitting the meat of their schedule and in position to challenge for the Big 12 Championship.

Oklahoma was a heavy favorite in this one and did not disappoint. The Sooners jumped out to a 13-0 lead and dominated the young Tennessee squad early.  The Sooners extended the lead to 27-10 by the end of the 3rd quarter and capped off the scoring in the 4th with a 100-yard pick-six by Julian Wilson.

Trevor Knight had a reasonable outing throwing for 308 yards and a touchdown as well as running in a TD.  Keith Ford caught a TD pass and ran one in to finish off a great day as well.  The OU defense was dominant, sacking Todd Worley 5 times and coming up with three turnovers including Wilson's pick-six.

Bob Stoops was humble in victory, saying things like,"it's a long year", "happy with the team effort", "got to keep getting better", etc.  But with his long held disdain for the SEC his excitement must have been difficult to keep in check.  Stoops is now riding a 2 game winning streak against the SEC and smiling every time he thinks about it.

There is no shame losing to the #12 team in the nation by 3 points at a neutral site in a hard fought affair, especially if you are coming off a 41-7 home shellacking.  But with UCLA underwhelming throughout the season and the "neutral" site in Dallas, this was a winnable game for the University of Texas.  They started off the game by electing to go on Defense first after UCLA won the coin toss and deferred to the second half.  The Bruins gladly took the ball to open the first and second halves much to the confusion of all Longhorn fans in attendance.

Brett Hundley, UCLA's Heisman caliber quarterback, left the game in the first quarter with an injury to his non-throwing arm and was replaced by Sophomore Jerry Neuheisel.  Although presumably a boon to the UT defense, Neuheisel was brilliant in relief and ended up stealing the show with a 33-yard TD pass in the waning minutes of the game to seal the victory.

Texas was in position to win the game late after recovering a UCLA fumble with 4 minutes to play in the game and sitting on a 17-14 advantage.  After a three and out that only took a bit over 1 minute off the clock, Texas was forced to punt.  They gave up a 45 yard return to their own 33 and Neuheisel did the rest in connecting with Jordan Payton for the go-ahead score.

Tyrone Swoopes played well in his second career start throwing for 196 yards and 2 touchdowns and clearly is the quarterback of the future in Austin.  The Horns vaunted defensive front gave up 217 yards on the ground and the secondary got burned late on the game winner but overall the defense had a tolerable outing.  Though it was a valiant effort, the Horns came up just a bit short of a much-needed signature win.

Oklahoma and Baylor continue to roll, with Oklahoma having a solid win this week against an SEC foe.  Kansas State was off but West Virginia, OSU and TCU all solidified their positions in the middle of the conference.  Any one of those 4 teams could end up being a dark horse to win the conference and will be dangerous down the stretch.  Tech finally ran out of luck and even in victory Iowa State at 1-2 stays near the bottom of the pack.  Texas played hard in a loss to UCLA and Kansas is already itching for Basketball season.

Bryce Petty looked sharp in his return to action and the offense and defense were clicking on all cylinders in the first half against Buffalo.  They gave up some points in the second half, but the game was never competitive.  Now with a much-needed week off, the Bears can heal up and get ready to travel to Ames for their conference opener. 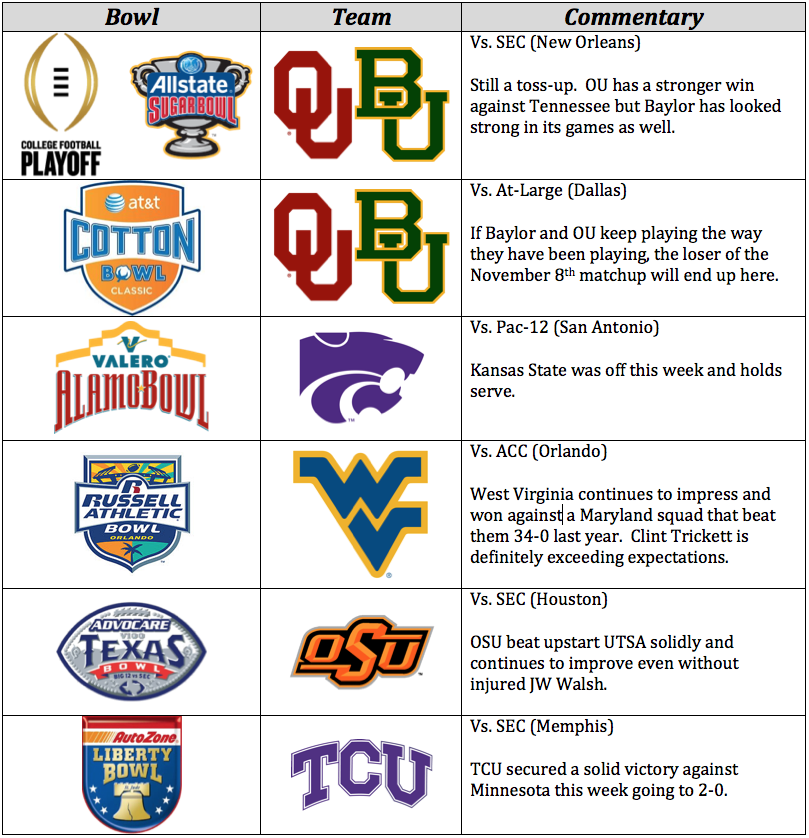