Things Change When You Are Not at Home

This game did not feel right. At all. There was just something about it that seemed off.

Share All sharing options for: Things Change When You Are Not at Home

I do not really want to come back with my first article here in a long time and rain down something that is not purely Bears optimism, but there is something that no one is talking about, and I'm surprised it did not come up at Big12 media days or on Art Briles' trip to Bristol, CT. I read an article Mark shared the other day describing how, in the past few years, the team with the best home field advantage, according to how they do on betting lines, belongs to our Baylor Bears. What I want to know is how much Baylor falls when they are the road team in that scenario.

Something that people cannot overlook at this point is that Baylor was just a different team on the road. I do not know what it was, but they just seemed...off. Like something was not clicking quite right or they just had a hard time getting things started. Most of the home games seemed like it was 21-0 by the time the line was finished getting settled and Chamber was still yelling at people to move farther up in the stands. (I'm assuming the Chamber part, because this occurred every game my freshman year two years ago) Whereas away games I felt like I just sat in front of the TV, well, also standing and jumping and screaming, but, you get the point, waiting for the offense to finally flex its guns and the Bears to just take off with the game. But that never was the case on the road.

There are a lot of factors that could have added up to why Baylor was so different on the road than at home. Injuries, for one, played a huge role in how the team was able to play down the stretch of the year. Also, the schedule got tougher. Regardless though, they were different. For those that don't have the scores from last year memorized...

Last year's squad went through the non-conference portion of the scheduled unscathed. Also, all three games were at home. I do not think playing those games on the road would have made much of a difference, but one could argue that Baylor got used to beating the snot out of teams at home. Now, after what Baylor did to Kansas State on national TV at home to end their national title hopes and Colin Klein's Hesiman hopes, Manhattan was going to be a very hostile environment. This game was stressful, no doubt about it. Especially because Bryce Petty went 12-21 (57% completion rate). Granted, this was Bryce's first ever Baylor away game to start in. Now, with that being said, Bryce did connect 93 yards to Tevin Reese for s score, and Reese and Antwan Goodley combined that game for 313 yards receiving helping Petty throw for 332 total. This was one of the better wins of the season in my opinion, because I thought this would really help the team in future road games. It was still too close for comfort though.

Baylor demolished Kansas. Absolutely throttled them. My only problem with this game was the stormtrooper uniforms. I'm just not a fan of the all white. But, that is a discussion for another day.

The game against Texas Tech was not listed as an away game seeing that Baylor was the home team, but it was played away from the Case so I am including it in this. Tech scored the first touchdown and we were like oh, ok, sure Tech, have your fun because we let you have that one. Tech scored their second touchdown unanswered and we were like um, ok Baylor let's go. Especially since both of Tech's touchdown drives had a combined time of possession of 6:44. Which looks slow compared to numbers Baylor has put up in the past, but seemed way too quick inside of AT&T Stadium. As the game goes on, Baylor answers on a Petty-Norwood connection, Tech scores again and misses the extra point and that miscue gives Baylor all the momentum they need to roll over a Tech team with just a horrid defense last year. To say Baylor, "fell through the cracks" that game is absurd. Doubt crept in after two quick Tech scores, but eventually their own faults lost them battle and gave Baylor the opportunity to get things going. It's just, those first couple possessions something did not seem right with Baylor. I know they got it going later in the game and put the imahammeru hammer down on the Red Raiders, but that slow start, as was also seen against K-State, just seemed like a harbinger of things to come.

Oklahoma State. I was actually in Austin when this game happened. I was at the Oasis for a fraternity function and pretty much snuck away from everyone and watched this game in the bar. I saw enough. I followed the game other places. It was tough to get through. This was everything coming to its peak, and then crashing down in the saddest way possible. The Petty trip led to Baylor not being able to score on the goal line against the Cowboys (Totally wouldn't be the case if this was the pro Cowboys), and the rest of it, we all know. Or you forgot it and I just reminded you and I sincerely apologize. This was the worst case scenario. Baylor had a slow start and Oklahoma State did not. Baylor tried to get things going, but OSU would not give them any life. The road woes continued for the Bears at that point. But, to ease Petty a little on that trip, there was another quarterback who could not lead his offense into the end zone on the goal line in Stillwater en route to a blowout, and he turned out to be OK.

I was at the TCU game. Also, I very much dislike the color purple. Fun fact though, there is an all girls dorm at TCU named Colby. So, as Carl the greenskeeper would say, I got that going for me. This game was very odd. Baylor opened up the offense in a tight formation the first series. Then, Petty would clap his hands or flap his arms and the receivers would sprint out to the hashes in some Briles-esque spacing and Petty would run the play. The first was a run, and then there was some trickery. I had never seen Baylor run something like that. I also never got to see it again the rest of the season. I really do not know where that came from, or what it was, but I liked it. This game did not feel right. At all. There was just something about it that seemed off. Maybe because I was watching Baylor play and I wasn't in Floyd Casey Stadium, maybe it was because my dad thought row AA preceded row A instead of it coming after so we were pretty high up, or maybe because that siren TCU blows after every score made me want to punch anything near me. Regardless, something was off.

It was just a few short days after TGCAB's brother had passed away, as well as as the week following what had happened in Stillwater. The players really wanted this game for Briles and I know he wanted it. The Horned Frogs were not going to be bowl eligible this season, and this was their chance to beat Baylor when, assumedly, they would be down. Baylor started with a field goal, TCU matched, and then Baylor kept converting on third and fourth downs. A delight for me to see around so many TCU fans. Another fourth down approached and Petty threw it out of the back of the end zone. Well, until Clay Fuller made a catch of the year nominee in the back of the end zone. The game continued to go back and forth until Orion Stewart intercepted Casey Pachall for an 82 yard touchdown, and then not to be outdone, Eddie Lackey picked him off for a 54 yard touchdown return. Even with both of those plays though, Baylor just barely hung on against a TCU team that had not been that good. The game, of course, ending when Pachall threw another interception to ultimately seal the Frog's fate. Pachall had some comment after the game about TCU being the better team, but  the score and the stats said otherwise.

The bowl game against UCF followed the same script as most of Baylor's away games. Baylor had a slow start and tried to play catch up. Time time though they just didn't do enough to get the victory. Not to go without note though, against TCU, Baylor was penalized 15 times for a total of 140 yards. Very, very hard to win when that happens. Especially when the other team is penalized 3 times for 10 yards.

Baylor goes to Buffalo, Iowa State and Texas back-to-back-to-back this year to open up their portion of the season away from McLane Stadium. They also travel to Morgantown and Norman. Aside from Buffalo, all of these games are going to be really tough for the Bears. Yes, they hung 70 on Iowa State last year, but that team is always very pesky at their place. Charlie Strong is clearing house and he is going to have players that fight and claw for the entirety of a game so they will not be easy. West Virginia has one of the best stadium atmospheres in all of college football and so does Oklahoma. I have really high hopes for the Bears this year as do most people, but this road schedule is not going to be easy. It never is, but the Bears are playing six of their games away from McLane Stadium, and last year they looked like a different team away from their home. (The sixth game being against Tech in Jerry World). If they can get through that unscathed, then I fully believe they deserve a spot in the final four. Lose one of them, and someone else probably just beats us out for the final spot. Who knows though? In a world where Baylor can be considered a national championship contender in football, anything can happen. I just hope the road woes have been addressed and this team figures out a way to click on all cylinders on the road like they do at home.

UPDATE: Mattisbear alerted me to these awesome thing called spit stats. It'll give you more of a visual representation from a statistical standpoint how the team did on the road vs at home. 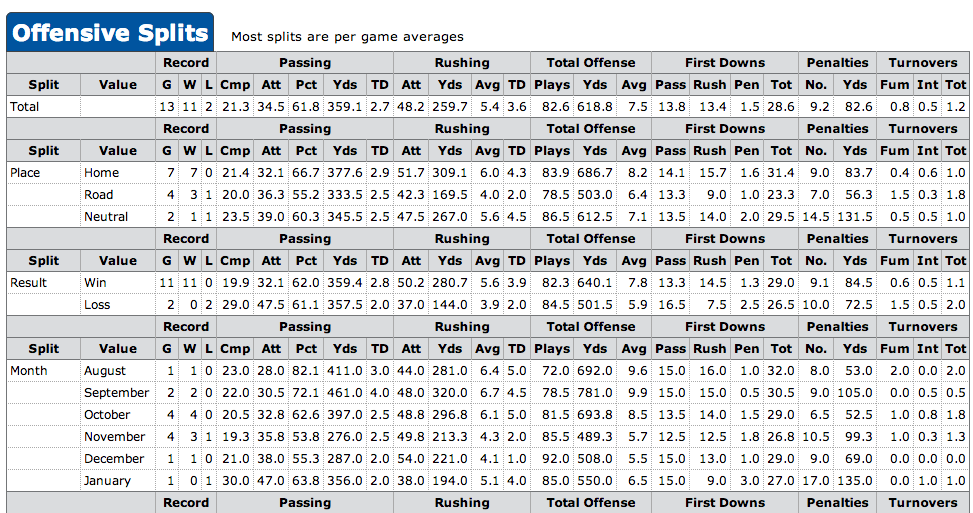 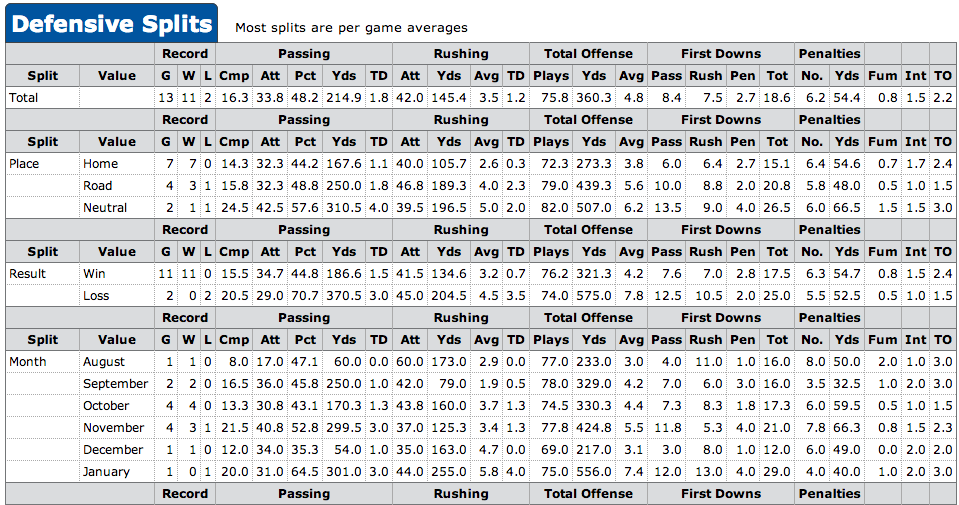