Saturday DBR: Wrapping Up and Rebuilding

Today's Baylor news is somewhat all over the place; at least we have news to report.

Share All sharing options for: Saturday DBR: Wrapping Up and Rebuilding

The final Intercollegiate Tennis Association rankings came out Wednesday and the Baylor Tennis program is well represented. Football earned their place on a little-known magazine. Overall, though, it is still a slow news day. But that's good, because I'm short on time today!

First, check out the sweet behind-the-scenes photo shoot. Second, We Run This State. Those from outside Texas might not realize, but landing on the cover (and in such a dominate fashion as Baylor has) is a huge deal for the program. You can read about the man, the myth, the legend, Dave Campbell here. And you bet your bottom dollar that Art Briles has a championship belt.

The time and date at which Baylor will dismantle Buffalo for the second year in a row has been announced. Friday, September 12th will see the Bulls and the Bears square off in Buffalo at 7:00 pm CT.

Men's Tennis placed four individuals and one duo in final Intercollegiate Tennis Association rankings. The Bears finished No. 6 overall as a team, reached the Elite Eight, and won both the regular season and tournament Big 12 crowns. The highest-ranked team in Texas once again, the Bears finished in the top-20 for the 13th-straight year.

Julian Lenz (No. 4) and Patrick Pradella (No. 18) both earned All-American honors by placing in the top-20 of the final rankings. Diego Galeano and Michel Dornbusch finished 40th and 119th, respectively, to give Baylor four in the final rankings. Pradella and Mate Zsiga's doubles team placed 28th.

Women's Tennis also put four singles players and a doubles tandem in the final rankings. Kiah Generette (No. 52), Jordaan Sanford (No. 64), Ema Burgic (No. 77), and Blair Shankle (No. 109) are the most the Lady Bears have put in the final rankings since The Year of the Bear. Victoria Kisialeva and Shankle placed 22nd in the doubles rankings. Overall, the Lady Bears finished No. 14, the 10th-straight time they've been in the top-20, and won both the regular season and tournament Big 12 titles.

Looking ahead, the Lady Bears welcome NC State transfer Rachael James-Baker to Waco. James-Baker is tasked with replacing the experience lost by the three graduating seniors. She will have two years of eligibility to play at Baylor.

It's game day for the US Men's National Team as they face Nigeria in the finale of the "Send-off Series" tonight at 5:00 on ESPN2. Can the Yanks pull together a complete performance (especially at the back) and reassure the fans that they are the real deal? Perhaps this MURICA bear will be the good luck charm. 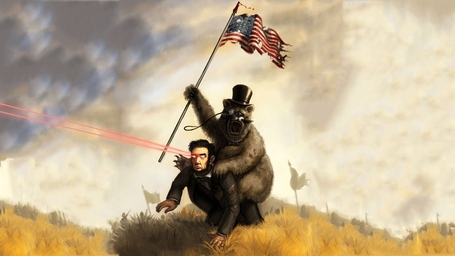