The best DBR ever. Of all time.

We've got a ton of bear news today. More than I know what to do with.

Kneel before the bear. Bears are America's finest killing machines, beating out Shawn Oakman, poodles, and the average Jedi Knight. Everyone knows that bears are awesome, but just how awesome are they? Let's find out by taking a look at the American Black Bear, which is decidedly less deadly than its grizzly counterpart, but still a whirling distributor of clawed doom.

A bear's resting heart rate is about 14 bpm. A black bear  has a top speed of 30 miles per hour. If someone with a gun of considerable stopping power managed to shoot a bear through the heart, the bear would have 4.2 seconds to close and get in a body slam/swipe before losing any blood. That's a horrifying prospect for non-bears. Of course, bears can also climb, bite, swim, and prevent forest fires, but most of the time they just sleep.

Bears are taking over the universe. Some bears are average joes that dumpster dive for a living. Some tote machine guns and kill zombies. Some serve as mounts for U.S. presidents. Some are transursine life forms that inhabit your darkest dreams.

Look at this guy. Look at this dumpster-raiding fool. He's a shining example to us all. Was he given any superpowers? Any bionic limbs? No. But he be on his grind anyway. "You cain't stahp me," bear says. And why would you want to? He's just being a bear.

The Bear Who Dreamed 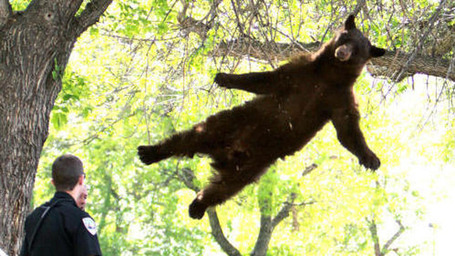 Behold, the bear who dreamed. He climbed the tree with dreams of glory. He waited for the humans to assemble. This would be his moment of glory. Like a baby bird, he crept nervously to the end of the branch, imagining what the future held. Surely, he would go on a world tour. Children would flock and ask him for his autograph. The world's first flying bear. He liked the idea. He leapt. And then someone snapped that picture. 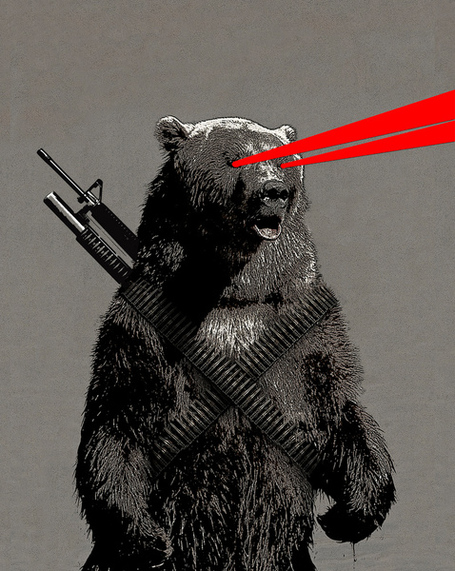 Propaganda Bear is always watching. He is smart, he is powerful, and he is well-armed. The red cones he calls eyes are always on the swivel, looking out for troublemakers. Is he a hero? Is he a villain? We may never know. 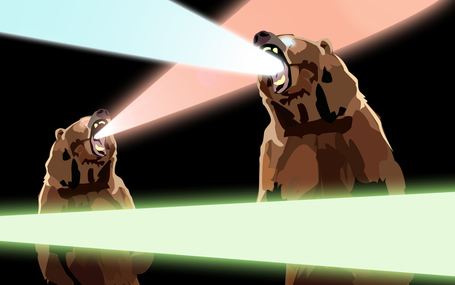 The Powerpuff Bears represent the best in all of us. A kindly professor created them in a laboratory from a mixture of bear DNA combined with sugar, spice, and everything nice. Now they're the cuddliest superheroes ever.

Bear does human thing. Bears needed to learn how to sit in a chair if they planned on being sophisticated. This big fella was a pioneer. He even figured out that the legs of the chair go on the bottom. 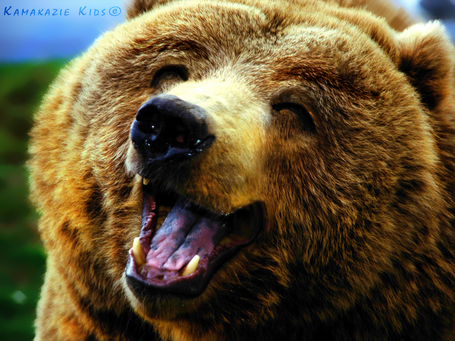 One of the rarest bears, the Mattisbear is known for its absurd but lovable personality. It loves brews, social media, sports, and the act of acquiring buckets. Approach a Mattisbear with caution. It may troll you based on your allegiances in the world of sports, or it may acquire a bucket on you. 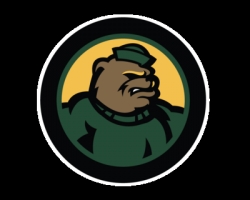 A Daily Bear left to his own devices will spend most of his day napping, working, eating, and loving on his or her family. A motivated Daily Bear will write insightful things and keep his or her eyes peeled for relevant news. Sadly, some days are completely devoid of newsworthy information, and a Daily Bear is forced to improvise. Today is one of those days, and this Daily Bear hopes you learned something about the wonderful and terrible mascot of Baylor University.