Thursday Daily Bears Report: That Part of the Offseason

The hype video is out, and there's over a month until Big 12 Media Days. We are now in the deepest, darkest depths of the offseason.

Share All sharing options for: Thursday Daily Bears Report: That Part of the Offseason

There is one announcement of note this morning: Jordan Strickland and Linsey Hays were named to the WCWS All-Tournament team! Congratulations, ladies! Other than that, though...

I hopped from paid site to paid site.

I laid an offering at the feet of the Sport Gods and asked them if anything noteworthy had happened.

Baylor is the Internet and so can you.

News channels may have been almost completely dead yesterday, but Baylor Twitter was alive and well. Somehow, even in the deep offseason, the online antics of fans and players spread like wildfire, and great stories and conversations spring out of nowhere. In lieu of official "news", here's some fun stuff generated by Baylor's online fan base.

Check out this construction update photo gallery on the new home of @Baylor_Business: http://t.co/1mxz82lYRl pic.twitter.com/Sbb3XxX9Np

The new Paul Foster Campus is going to be beautiful, comfortable, and an absolute joy to learn in. By the time it's completed, I'll be spending most of my time there. It was time to retire Hankamer/Cashion, and this is the right way to do it.

The interstate could run under that video board if you eliminated the median.

Now you look official @BaylorStadium at least we can practice our field goals @OurDailyBears pic.twitter.com/m1Nq9zULd5

Can you feel it yet?

Wat yall think me and my lil brother on da same team ???? pic.twitter.com/ytAQ5EfdAC

Pictured is Corey Dauphine, current Texas Tech RB/APB commit who many predict will switch to Baylor. He is of some fraternal relation to CB Terrance Singleton, though I'm not sure exactly how the two are linked. Kid's a stud.

College GameDay's official twitter account has dropped several Baylor factoids this offseason. They've announced that they'll broadcast from a new location this year- could Waco be it? If Baylor and Oklahoma State both sport strong resumes by the time they meet, it would make for a great narrative. As for the question itself? Any Baylor fan would say yes, with some arguing that Gus Malzahn deserves a share of the top spot.

Another satellite camp, this time in Marshall, right in the middle of the deep East Texas talent base. The likes of Blake Lynch and JaMycal Hasty were culled from events like this one. I plan on being there to watch.

I'm really enjoying the theme of bears with laser vision. I'll keep that rolling for a few days. 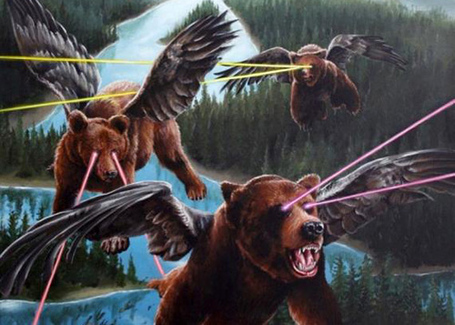