The Waco community is finding new ways to take advantage of McLane Stadium, Baylor athletes earn accolades, and we have an official schedule for Equestrian.

Outdoor Waco announced yesterday that they are interested in buying pontoon boats to serve as water taxis on the Brazos River. They would mostly be used on game days, but could provide quick transportation to and from Waco riverside attractions on a daily basis. As more high-end riverfront development gets under way, the business could expand. The City of Waco is working with Outdoor Waco to make water taxis a reality. Local law does not address the concept, and necessary permits would have to be acquired. This is an idea that may fizzle out after a season, but it could also establish a long standing tradition. We'll see.

Senior tennis player Patrick Pradella was named the Big 12 Scholar-Athlete of the Year in Men's Tennis. Pradella, who graduated in May, clinched the 2014 Big 12 title with his decisive singles win over Texas earlier this year.

Freshman sprinter Trayvon Bromell, who is both a national champion and a junior world record holder, was named the USA Track and Field Athlete of the Week yesterday for his performance at the NCAA Championships in Eugene. Bromell is one of ten runners in NCAA history to post a 100m time of less than ten seconds, and he's younger than the other nine by two years. Barring injury, I see the Olympics in Bromell's future.

I love horses. Chances are you do too. That's why I'm pumped to announce that the 2014-2015 Baylor Equestrian schedule has been officially released. It features seven home meets and six away meets, with matchups against other Big 12 programs that are regularly in the national championship picture.  I'm not even kidding, I love horses and I plan on making it out to one of the events.

Twitter now supports GIFs. They introduced the feature quickly and quietly, and 24 hours after the fact, Twitter has not yet metamorphosed into Tumblr, so I'd say it went well. For new users or readers who have no technological intuition, posting a GIF to Twitter is easy on an iPhone. Simply save a fully loaded GIF from your browser to your camera roll and insert it into your tweet like any other picture. When Twitter's image selector appears, GIFs should have a symbol to differentiate them from other photos. Nick Pants must be on Cloud Nine. 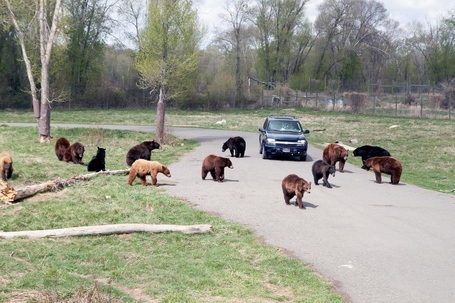 These are truly the last days.