Why Texas is the Perfect Fit for World Cup 2022

Share All sharing options for: Why Texas is the Perfect Fit for World Cup 2022

Since the news broke that Qatar (allegedly) bribed FIFA officials to "earn" their World Cup 2022 bid (not to mention all the other maleficient things Qatar is accused of), the international football community has clamored for a re-vote. Today, we learned that the United States would be front-runners to host in 2022 should Qatar lose their bid. But the US is far too spread out. No, what we really need is to pick a region of the United States and have the Cup located there. To that I say, "What better place than the Lone Star State?"

The Republic state of Texas is the perfect location for the 2022 World Cup. First and foremost, the important parts, the stadiums. Let's take a look at nine American football stadiums that could potentially host matches, as well as the two MLS stadiums which could serve as ancillary locations for training. A quick note on turf, as most of these stadiums have turf: FIFA regulations don't prohibit it. Natural grass is certainly recommended, and, a former player, I can tell you the players prefer the natural stuff, but turf is not an automatic dis-qualifier. 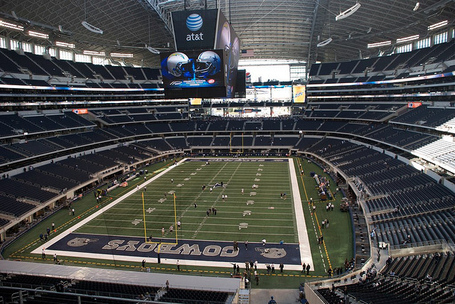 Jerry World. Cowboys Stadium. AT&T Stadium. The stadium of many names is the obvious headliner for the 2022 World Cup. Having already hosted a Super Bowl, the Gold Cup semi-finals, and the largest indoor concert in North America (God bless George Strait), Jerry and the boys know how to hold a massive event. The stadium can hold a upwards of 105,000 people, which would make for one of the largest final matches ever. Imagine, if you will, the United States and Mexico facing off in a World Cup final. I was at the Gold Cup game where Mexico fell to Puerto Rico and I could not believe the intensity of Mexico's fans. Take that, crank it up to eleven by adding the World Cup final and rivalry factors to the mix, and you've got yourself one hell of a match. Regardless of the countries playing in the final, you know that stadium is going to be packed to the brim. Jerry must be salivating right now. 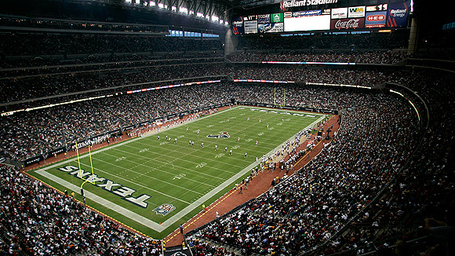 The former Reliant Stadium has hosted a Super Bowl, hosts the Houston Livestock and Rodeo Show, and has played host to many a game for the US Men's National Team. The 71,000+ seat stadium would make the perfect host for a semi-final game, as well as the third-place game. The Houston metropolitan area is home to over 2,000,000 people, so the city knows how to deal with massive crowds. Traffic is a downside, but there's a solution to that coming later in the post. 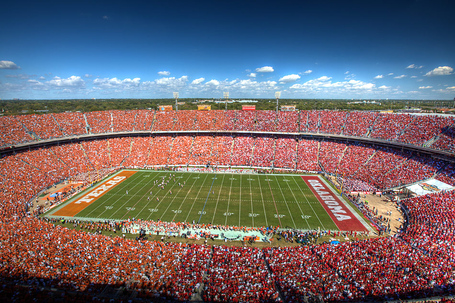 Of all the stadiums in Texas, only one was used in the 1994 World Cup. Nowadays, the aging beauty is known for one thing: The Red River Rivalry (or Shootout or whatever they call it now). In my scenario, the Cotton Bowl would be used for only one game: the second semi-final. The stadium probably could handle the rigors of hosting multiple group play matches, but it just seems wrong putting more than one game in the stadium - perhaps the RRR has tainted that view. Anyway, the Cotton Bowl officially seats 92,100, but can hold up to 101,000, making it plenty big enough for a semi-final match.

In case you were unaware, football (the American kind) is huge in Texas. We build massive stadiums and fill 'em to the brim with some of the best fans in the country. As such, the infrastructure is already in place for hosting group play and early knockout round matches. 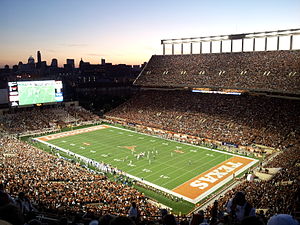 Darrell K Royal - Texas Memorial Stadium is plenty big enough to host the World Cup. Seating over 100,000, DKR is one of the largest stadiums, making it the perfect location for US and Mexico group stage games. 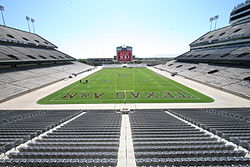 Kyle Field may be home to the awful Aggies, but it's another massive stadium in the good ole Lone Star State. Have you figured out the theme of this post yet? Everything's bigger in Texas and a World Cup in our great state would challenge the 1994 Cup for highest average attendance. 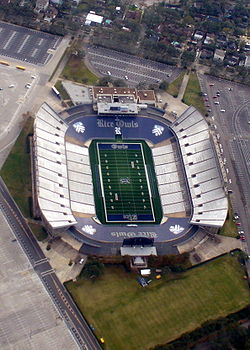 The Alamodome is home to the UTSA Roadrunners and is the only location in San Antonio that would be able to host Cup matches. Seating 65-72,000, the Alamodome would be a popular location for the group play games. 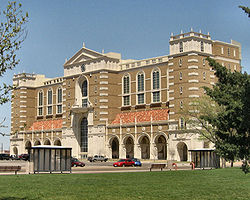 Jones AT&T Stadium would be a tad out of the way, but then again, Brasil has a stadium located in the middle of a rain forest. The 61,000 seat stadium would parrot the usage of its Brasil counterpart and host group play. 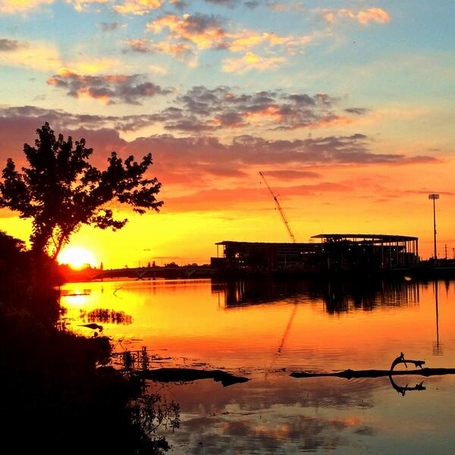 McLane Stadium is the latest and greatest stadium in the state. Just imagine: World Cup Sailgating. Since this is a Baylor blog, the Palace on the Brazos needs no introduction, but in case we have any non-Bears reading this, I'll elaborate. McLane will be set up for 45,000 when it opens this August, but is expandable to 55,000. On the smaller end, for this particular Cup, but still larger than a couple of stadiums in Brasil. 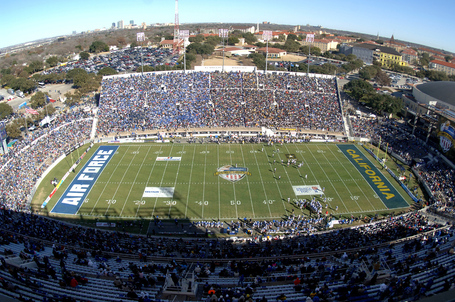 Amon G Carter Stadium is yet another stadium in the Metroplex area - that's another theme of this post, DFW and Houston dominate. That's just how the stadium layout is. At 45,000, TCU's den would be the smallest of the ten presented here, but it's still bigger than some of the Brasil stadia.

The biggest omission here is West Texas. The Sun Bowl in El Paso would provide access to the West Texas fanbase, plus it seats over 50,000, making it plenty big enough for some group play matches. SMU's stadium, with expansion could make another good site. All in all, there are innumerable options of places where matches could be played.

The two main locations for practice would be at FC Dallas' and the Houston Dynamo's stadiums. Although they are not big enough to host games, the stadiums and their training games would be perfect for national team practices.

Transportation. Public transportation in Texas (and all of America, for that matter) sorely lacks in comparison to European countries. If people from all around the world are to come to Texas, they'll need public transportation to get around. One solution is a massive high speed rail system that would follow along I-35 and -45. However, as Prashanth pointed out to me, the system would very likely not up and running in eight years time. So this means that light rail and buses need to be implemented (Think TRE/DART in Dallas).

The heat. Texas in summer is hot, surprise. Still, it's thousands of young'uns can do three-a-days in August heat, professional athletes can deal with the heat.

Sure, this is entirely theoretical and won't ever happen. But what if it did? What would you do differently? Would you sailgate the Brazos pre-World Cup (of course you would)? Discuss the potential for a World Cup in Texas in 2022 in the comments below. I hope you enjoyed the crazy ramblings and be sure to watch the Americans beat Ghana on Monday!