When Texas A&M nearly destroyed the Big 12 in 2011, they were tampering with forces beyond their control. Had they succeeded, they would have triggered a chain reaction that would have radically transformed how we see college football.

Share All sharing options for: Big 12 Realignment: An Alternate History

In a writeup harking back to the chaotic days of conference realignment in 2011 and 2012, SB Nation's Jason Kirk picked apart Oliver Luck's master plan to merge the dying Big East and the fractured remains of the Big 12 in a realignment doomsday scenario. Thankfully, none of this actually came to pass, but the plan sets up an interesting alternate timeline.

Dare I say, the Darkest Timeline? Bear with me as I predict how things would have turned out, since I'm bored. 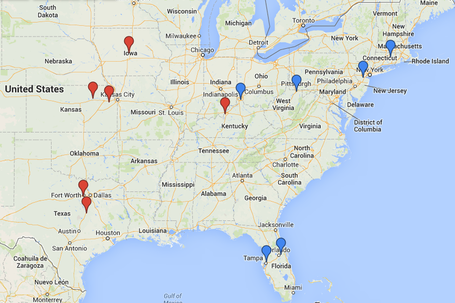 A two-division Frankenstein's monster of a conference with exceptionally strange geography. Upon its formation, members thought to themselves, We have the SEC surrounded. Good. Here's the makeup:

Summer 2011: Aggie Heresy and the Beginning of the Dark Days

Baylor decided to take no action in 2011, and Texas A&M, Colorado, Nebraska, and Missouri depart from the Big 12 for new homes. Seeing no way to save the conference on such short notice, Texas and Oklahoma bolt for the PAC 12, while Oklahoma State and Texas Tech settle in the Mountain West, where they are expected to be forces of nature. TCU, looking to move up in the world, signs on with the remnants of the Big 12 in an effort to join up with old Big East and C-USA powers to form what they hope will be a power conference.

The conference formed looks "meh" at first glance, but it's actually stronger than anticipated, if lackluster in terms of media contracts and name recognition.

In year one, Baylor puts itself on the map as quarterback Robert Griffin III leads an insane comeback against TCU to begin conference play. Geno Smith and a fledgling Teddy Bridgewater also stand out, and a young gentleman named Blake Bortles turns heads in mop-up duty for a solid UCF. WVU blitzkriegs the East and Baylor manages to win the West after close shaves in Manhattan and Lawrence. By the time the conference championship rolls around, both Griffin and Smith are widely considered to be on the short list for the Heisman Trophy.

Without his legendary moment against Oklahoma, Griffin simply doesn't have the star power to win the 2011 Heisman Trophy

The resulting carnage is a game for the ages, but WVU's defense is just enough to give the dynamite Dana Holgorsen offense the room it needs to carry home the win. The Mountaineers secured a berth to the Orange Bowl, where they thumped Clemson 70-33. Baylor earned a trip to the Cotton Bowl, which elected to take a Texas school in lieu of a Big 12 tie-in. Baylor faces Alabama and loses to one of the strongest defenses in history. They fight valiantly, but the Alabama run game wears down a transparent Bears defense. Without his legendary touchdown against Oklahoma, Robert Griffin is forgotten by Heisman voters elects to return for his senior season. LSU wins the national championship against Oregon. The Ducks kept Alabama from forcing the rematch after boosting their resume with wins over PAC 12 newcomers Texas and Oklahoma. Oklahoma State, after their undefeated slaughter of the Mountain West, gripes that they could have beaten the Tigers. 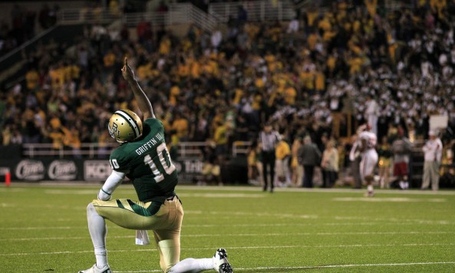 In year two , Kansas State and Baylor thunder through the West division, led by a supersonic RGIII and a repurposed tight end named Collin Klein. West Virginia's high-powered offense routs the East, but their lack of defense is exposed when a blossoming Blake Bortles manages to drop five total touchdowns in what would be the 'Eers' closest shave en route to a 12-0 regular season.

An ascendant Griffin III made Manziel an afterthought, and Johnny Football never rose to true stardom

Louisville's Teddy Bridgewater is overshadowed by the rest of the talent in the conference, but he's creating some 2013 Heisman buzz with impressive numbers. Baylor dominates Kansas State on a chilly night in November in Waco, and RGIII has a Heisman performance in the top-15 matchup. The Baylor-WVU title game is nuclear, but the Bears defense picked up late in the season and Baylor wins the conference 77-63. They are selected to go to the Sugar Bowl. Nick Florence is never given a chance to run the Baylor offense and is forgotten to all. 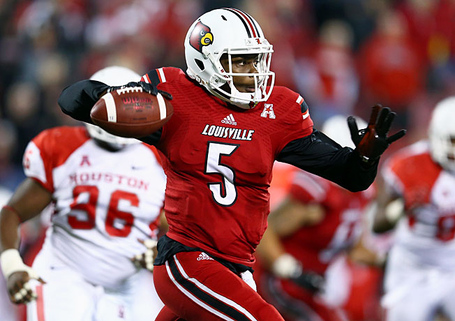 2012 Heisman Trophy winner Robert Griffin III lights up Florida for the school's first BCS bowl win as Will Muschamp's cracks begin to show. Alabama routs Notre Dame in the national championship, and OU, led by Landry Jones, manages to upset Stanford and Oregon to win the PAC 12 North. They lose narrowly to UCLA for the conference championship, and take on Oklahoma State in the Holiday Bowl for Bedlam in California. The Pokes win, giving the MWC a much-needed sense of validation. Johnny Manziel, Texas A&M's star freshman quarterback, is kicked off the team after multiple arrests for public intoxication following his Heisman loss to Griffin. He signs with Sam Houston State.

2013: All Good Things Die in Stillwater

Baylor faces UCF in midseason form, and walks out of Orlando with a victory

In year three (2013), the conference loses Griffin, Smith, Klein, and others, clearing the way for Blake Bortles and Teddy Bridgewater. Bryce Petty also thunders onto the scene. UCF, Louisville, and Baylor are early favorites for the conference crown. Early in the season, West Virginia stuns UCF in Morgantown (a performance that they used against Oklahoma State in the Canon Timeline) and the reeling Knights take a hangover loss to Louisville the next week. Despite Bortles' skyrocketing draft stock, Bridgewater is the golden boy of the East as he leads the Cardinals to the conference championship against Baylor. Baylor's lighter conference schedule helps their team stay healthy, and they go into a cross-division night game in Orlando to face UCF in the middle of a rare November hurricane. Bryce Petty is shut down, but Lache Seastrunk, Glasco Martin, and Shock Linwood, all healthy, shoulder the load and manage to eke out a win. Baylor beats Louisville in the title game on the back of their defense. 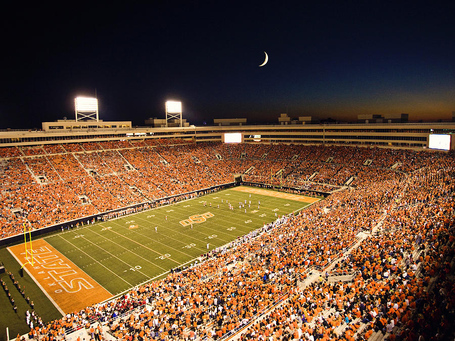 Meanwhile, Auburn seeks to bolster its non-conference schedule and buys out their game against Western Carolina in favor of a November 23rd game in Stillwater against reigning Mountain West champs Oklahoma State. It is freezing in Stillwater, and Auburn cornerback Chris Davis badly sprains his ankle when he is attacked by the Stillwater TurfMonster.

Auburn falls on the sword meant for Baylor. Chris Davis is injured and the kick six never happens

The next week in the Iron Bowl, Alabama comes up short on a game-winning field goal, and an Auburn player attempts to return the kick, but is tracked down and tackled as Davis watches from the sidelines. The Tide wins in overtime. Baylor is snubbed from the national championship and Florida State narrowly beats Bama for the title. Baylor is resigned to the Fiesta Bowl, where they face off with a Texas team that somehow derped itself into a second place finish in the PAC 12. The Bears win 30-10.

What will happen in 2014, you ask? Why, anything could happen! It's the Dark(er) Timeline. For all I know, Brady Heslip could win a national championship in football while coaching a team of polar bears. What are your predictions?