Women's Tennis clinched at least a share of their respective Big 12 Championship yesterday and Men's Tennis can clinch (a share?) with a victory over Texas on Wednesday!

Share All sharing options for: Monday DBR: Aced It

Every Baylor team won yesterday! I've also looked into my crystal ball and foresaw that all the Baylor teams competing today will win! Wait...you're saying there are no Baylor sports today? Oh... Dang thing needs to be re-calibrated.

Lookie here, some offense appeared! A combined 14 runs came off of about as many pitchers (there were seven pitchers...that's a ton for softball).

Oklahoma kicked off the scoring with two runs in the first, but Ari Hawkins' two-run homer tied the game up. Going into the fifth inning, Baylor was down, 5-6, when inclement weather delayed the game for nearly 90 minutes. Coming out of the break, Baylor was focused and came out to knock in three runs in the sixth inning.

With the win, Baylor salvaged a game against a very good Oklahoma side. Hopefully the ranking for Baylor won't drop too much; both of the losses were close games.

There is much Oklahoma domination in this section. Excellent.

The Okie ags never had a chance as No. 6 Baylor crushed their opponents to rebound from the disappointing loss to the other Okies the other day.  Of the 25 matches played, Baylor has recorded a whopping 13 shutouts. Can you say Big 12 Champions?

Congrats to @BaylorWTennis on securing at least a share of Big 12 title with today's win over OU. BU's 54th all-time B12 title! #SicEm"

For the tenth game in a row, Baylor has come out victorious. The perfect-in-conference No. 17 Lady Bears cruised past No. 18 Oklahoma to earn a share of their 10th Big 12 regular season title, their eighth in the last nine years. Like the Men's team and Football, Women's Tennis can clinch the outright Big 12 Championship in their final game of the season against Texas.

Women's Golf went 4-2 in singles match play yesterday to take the weekend series (doubles and singles matches) from UTSA. The Big 12 Championship is up next for the Lady GolfBears.

The Rangers took the first series of the year with a thrilling, stunning, engaging 1-0 win over the Astros. The lack of offensive production doesn't look like it will be getting better any time soon; Adrian Beltre was placed on the 15 day DL with a strained quad.

For those of you inclined to watch the coolest sport out there (da-dum-tsss), here is the schedule for the first round of the Stanley Cup Playoffs. The Dallas Stars are facing the Anaheim Ducks and have several very late start times, huzzah!

The competition for the EPL title has come down to the wire. Liverpool, Manchester City, and Chelsea are all within a few points of each other. How will the rest of the season play out? SBN's Zach Woosley has the scenarios worked out for you here. Right now, 'Pool are favourites, but anything can happen. April 27th, when Chelsea play at Anfield could very well be a de facto title match.

In honour of the EPL race and to annoy Peter, I present a teddy bear in a Chelsea kit for today's Daily Bear. Blue is the colour! 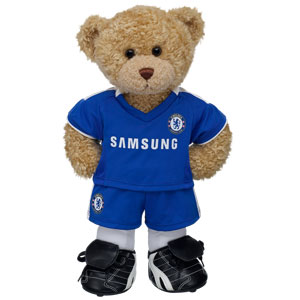