In a night full of victories, the Lady Bears took home a conference championship and several seniors said goodbye to the Ferrell Center.

Last night was a good one for fans of Baylor men's and women's basketball. Both teams played Iowa State, and both walked away with double digit victories. This is encouraging, especially for a men's team that is sitting on the right side of the ever-volatile bubble.

The Ferrell Center was a fun place to be last night. The crowd wasn't what I would have liked it to be, but it was a good showing based on what we've come to expect this season. There was a respectable student presence considering the stress of impending midterm exams, and those present got rowdier as the game went on. Music was stellar as usual.

The Baylor men beat No. 16 Iowa State in an absolutely fantastic game of basketball. I was entertained from the beginning to the end. Cory Jefferson played a great last home game in front of 8,500 fans, cruising to 21 points and seven rebounds. Jefferson's performance featured several signature dunks, including an alley-oop from Gary Franklin. Brady Heslip put up 18 points on 5 threes and 3 free throws. Gary Franklin was quiet when it came to scoring, but had several excellent assists.

The story of this game was improved transition defense and proper exploitation of mismatches by the Bears. Melvin Ejim struggled to find his shot on the inside all game, and Georges Niang was kept on the bench by fouls. DeAndre Kane posted good numbers as usual, but was unable to keep Baylor from running away in the final minutes as his shooting cooled down and his supporting cast was unable to make plays. This victory bodes very well for Baylor' tournament hopes.

The 74-61 victory marks the first time the Cyclones have been held to below 70 points this season. Coach Drew thanked the crowd after the win with a short, emotional speech. The three seniors were then allowed to address the crowd. All three acquitted themselves well, and at the request of the student section, Cory put away one more dunk. Drew then invited the crowd onto the court to join in the final team prayer of the year.

At some point during the benediction I realized that Drew's hand was on my shoulder. I have been physically touched by his faith and now possess magical powers, the benefits of which I have yet to discover. Thank you, coach. Thank you.

On his senior night, Cory Jefferson stays out on court to take an #OscarSelfie with fans. #BAYvsISU pic.twitter.com/dkHh3jV51F

Nobody has more fun than Baylor and Rico (Baylor) Gathers. @kinggatz2 probably my fav dude http://t.co/jbj1UXX5xi Give us a retweet Rico!

Something I hear from fans of other schools is astonishment at just how fan-inclusive a lot of Baylor athletic event are. Most of the team returned to the floor after the game to talk to fans, and they were all smiles as kids, students, and alumni alike came to talk to him. I saw Rico sign a six-year-old's empty water bottle with a grin on his face, and Cory had to be dragged off the court by one of the managers. It was a great night, and I wish it hadn't fallen at such an inconvenient time for the student body. 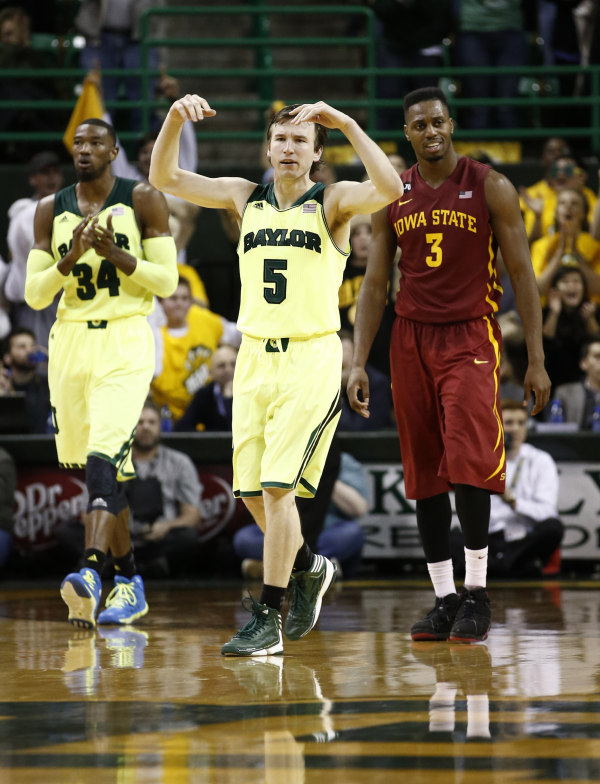 This picture pretty much describes the game.

Women's basketball walloped Iowa State in Ames last night and walked away with a Big 12 championship. Odyssey Sims went cold, scoring only 11 points, likely as a result of her injury a few days ago. Nina Davis stepped up and scored 26 points in the Lady Bears' 70-54 victory. Big 12 tournament play begins for the Lady Bears on Saturday at 1:30 versus the winner of the game between Kansas and Kansas State (8th and 9th seeds respectively). Baylor is the first seed of the tournament. Here's everything you could possibly want to read about the fourth consecutive conference championship.

No news that I can personally report, sadly. Spring practices grind on, and Bryce Petty has reportedly been on fire during drills. Come quickly, spring game.

The Best of the Rest

So you're bored during the offseason...

Good news! Last night on twitter, the idea was thrown out there to have viewings of Baylor games from this past season that we could watch and discuss on the blog.

In the offseason, we should organize nights where we rewatch 2013 games and talk about it on ODB. If you want to, I mean.