Nina Davis went off last night against Western Kentucky and Men's Basketball looks to knock off the Fightin' McDermotts. It's your Sunday Daily Bears Report.

There are 15 home events happening across the Baylor this weekend. Add in a dash of Madness and you've got yourself quite the busy sports weekend. Let's get right to it.

I made it to the Ferrell Center just in time to watch the California Golden Bears narrowly beat the Fordham Rams, 64-63. A poor final play spelled doom for the Rams, meaning the Golden Bears would face the winner of the Baylor-Western Kentucky game. And what an unexpected game it was.

I, along with most Baylor fans, thought that this game would end up closer to the non-conference games at the beginning of the season than, say, the OSU game in Stillwater. However, the Lady Toppers had other ideas.

OKCChuck has the full write-up, so I'll add impressions. My initial impression: Nina Davis, oh my goodness Nina Davis. Davis had an outstanding game, putting up a career-high 32 points. She added in 10 rebounds to earn her 12th double-double of the season. My favorite play was when she was driving to the basket, stopped, and spun around a defender for the easy layup.

This was our reaction. via img2.wikia.nocookie.net

The other half of Baylor's high-scoring duo, Odyssey Sims, had herself a mighty nice game as well, putting up 31 points and 5 rebounds. Combined, Sims and Davis put up 63 of Baylor's 87 points.

While the majority of points were scored by our Player of the Year, the other players on the team also contributed significantly. Sune Agbuke recorded 6 rebounds, but there were several times where she would tip the ball back out to a teammate, extending the offensive series. Niya Johnson also had a dagger of a three to put the Toppers away for good.

Congratulations are in order for Western Kentucky though. Those girls gave our Lady Bears a heck of a fight and probably could have advanced to the next round if they hadn't drawn Baylor in Waco. Chastity Gooch is a great player.

Nina Davis with 302 rebounds this season so far, becomes just 3rd BU frosh to haul down over 300 rebounds. Sophia Young leads with 351.

Yes, I know this game isn't at the Alamodome, but the Alamo Bowl was and we won that so roll with it. Also, Conner, his roommate, and I will be on-site to witness both North Carolina tears and the fall of Dougey McBucketts. We'll be Tweeting and such throughout the day.

The Bears look to advance to their third Sweet 16 in the last five seasons. Baylor will be up against it, especially if Creighton is on fire from downtown. I'll save the analysis for the Preview Post, but since I won't be here to comment on that, I'll add my predictions here.

McDermott will get his points, but Baylor will do enough defensively to limit the rest of the team. I think where Baylor will win the game is on the boards as Baylor is the longer team. Finally, we can't underestimate the influence of a home crowd. It'll be close, but I think Baylor advances, 78-75 on a Rico three (watch the video in the link and you'll understand that reference).

See y'all in San Antonio!

No wonder the Bears lost, they had to play two games yesterday! There were obviously numerous responses, but the BaylorMBB account had the best one by far.

Texas' Mandy Ogle hit a three-run homer- to put Texas in the lead. Unfortunately, the Lady Bears couldn't come back. They'll face off again tonight at 6:00 on ESPNU.

Baylor swept SMU 7-0 and knocked off Laredo College, 6-1 to remain perfect at home.

The women finished with a final score of 49-over 913 through 54 holes. Judging from Coach Jay Goble's comments, this match did not go as planned. 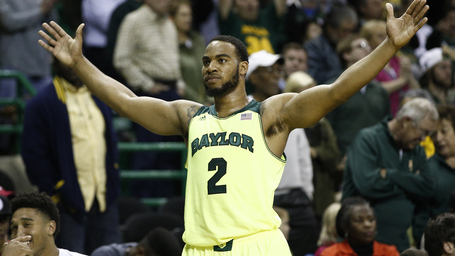 Come and take it, Creighton.