Selection Monday has come and gone, so now all we can do is wait. Let's look at what the Lady Bears are in for.

The Baylor Lady Bears are No. 2 in the South Bend regional. They will face Western Kentucky in Waco at 5:30 on Saturday. The game will also be on ESPN2, but if you are in or near Waco, you should be at this game. I have yet to confirm this, but last year students got in free; hopefully the same policy will apply this go-round.

There is no easy way to say this - the Lady Bears got an extremely tough draw. If all goes as planned (the top seed wins), Baylor is on a collision course with Kentucky in South Bend (click to see bracket). Those of you with any knowledge of United States geography will note that Kentucky is much closer to Fightin' Irish land than Texas is (roughly 5 hours compared to around 16 hours, to be exact). Win that game, and the Lady Bears will likely be facing undefeated Notre Dame on their home court. Win that game, and Tennessee could be waiting in Nashville. 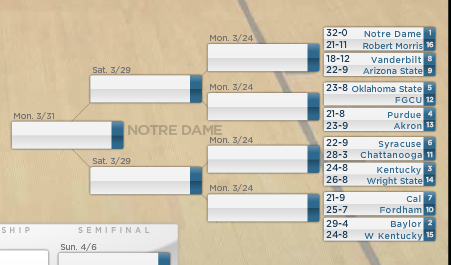 Even getting to the Sweet 16 is no guarantee. First, Baylor must knock off Western Kentucky, whom they should handle with ease. The Cal-Fordham game should be interesting. Cal is 9th by RPI and Fordham is 62nd, but Fordham leads in the majority of the other stats.

They may have received a tough draw, but you better believe that Coach Mulkey will have these ladies raring to go.

Don't quite have the time to go as in-depth with this as I did with the Men's yesterday, but here it goes.

Baylor - No. 2 vs No. 15 Western Kentucky in the South Bend regional. Game in Waco.

Texas - No. 5 vs No. 12 Penn in Louisville regional. Game in College Park, Maryland.

Iowa State - No. 7 vs No. 10 Florida State in Stanford regional. Game in Ames. They get Stanford in second round; possible upset?

All around, the Big 12 has a pretty tough path to Nashville. No one ever said March Madness was easy though.

The University of the Incarnate Word announced yesterday that they have scheduled a game against Baylor for 2019. As lamron pointed out, SMU was originally scheduled for this date, meaning they likely backed out...again. Baylor is scheduled to play UTSA and Rice as the other non-cons for the 2019 season. While UTSA and Rice have been on a rise as of late, it would be nice to play a major conference opponent, especially with the upcoming emphasis on strength of schedule. I'm sure Ian McCaw and TGCAB will work something out. Still, it is an interesting choice of opponent.

This is the second week in a row a Baylor pitcher has earned the honor of Pitcher of the Week. Sic 'em Dillon!

Baylor LHP Daniel Castano (1-0, 3.24 ERA) will face HBU's RHP Ross Kennel (0-2, 8.15 ERA) as the Bears take on a school I've never even heard of. HBU is in the Southland Conference; that would explain why I've never heard of them. I expect the Bears to win this one.

The Lady Bears face off against the Bobcats of Texas State for the second time this year. Hopefully, the previous meeting's 11-1 outcome is a sign of good things to come for the Lady Bears.

"All tickets will be just $3 for Tuesday night's game and free Dr. Pepper floats will be in the concourse from 6-7 p.m. for fans in attendance." They used a period after "Dr". Come on Baylor.

Game begins at 6:00 over at Getterman Stadium.

A&T will face Azusa Pacific and Hawai'i Pacific in a tri-meet at the Richard and Vivian Felix Event Center in Azusa, California. Because I know nothing about A&T, I'll give y'all the mascots instead. AP had the Cougars. Alright, common, but a solid choice. HP has the Sea Warriors. Boom. Hawai'i Pacific wins.

In case you needed further confirmation that Jerry Jones is, well, Jerry Jones, the 'Boys have signed Brandon Weeden.

There are a plethora of ways to fill our your bracket. Thankfully, SBN has done it for you. You can fill it out via baseball players, alphabetically, based on songs, using college rankings (Spoiler: Harvard wins), MASCOT DEATHBRACKET (highly entertaining, Baylor does well).

The List: Bracket schools that could have been real for all you know - SBN

I'd like to point out that "YOLO" is in the URL of this link.