I seem to remember San Antonio being rather good to Baylor in recent years...67-56 ring any bells?

Selection Sunday is finished. Now all we can do is wait until Thursday for the greatest four day event in sports to begin (Okay, yeah, there are play-in games earlier than that, but you get the point...). If you need something to tide you over, the Women's NCAA Selection Special is on ESPN tonight at 7:00. Baylor will likely be a 2 seed and will hopefully play its first two rounds at home in Waco. More on this tomorrow.

BaylorBears.com has become basketball central! Head on over there and ogle at the wide variety of statistics and pretty graphics. I have a feeling this will be very useful come Friday.

As you've probably already heard, Baylor earned themselves the No. 6 seed in the West region and will play No. 11 Nebraska in San Antonio Friday at 11:45 a.m. CST. Unfortunately, this time is the worst possible of the four slots on Friday; numerous students, myself included, simply cannot miss that much school (I've got five classes...). Now, if Baylor were to be so kind as to cancel classes so that we could actually attend the game... Make it so, President and Chancellor Starr. Seriously, I am extremely bummed I can't make this game. Hopefully Sunday's match will still be possible. Those of you that aren't in school should really go though and give the Bears the home court advantage they deserve.

Here's a look at the West region: 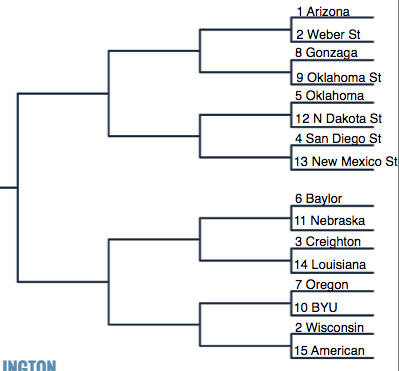 I'll save the ODB preview for its own article, but it appears the general consensus is that Baylor received a favorable draw here. Ubbs certainly thinks so. Look for more preview stuff as the game nears.

My initial predictions are that Baylor beats Nebraska by double digits, utilizes the home crowd to upset the three-point-happy Bluejays, and, in a total homer pick, also upset Wisconsin. I have yet to fill out the top part of this region, but Baylor certainly has a chance of going deep in the tournament. *chugs green and gold Kool-Aid*

For those with 247 membership:

Everyone else, you are best served by buying tickets directly from the NCAA or via Stubhub, etc. Baylor is playing in Session One.

The Big 12 put the most teams in the Big Dance of any conference. Given that the Big 12 is easily the best league in the country this year, this is not surprising.

Regular season champions Kansas (luckily, perhaps, given their recent loses) earned the No. 2 seed in the South regional. They will face Eastern Kentucky. I don't see Kansas losing this one.

Tournament champions Iowa State played themselves up to the No. 3 seed in the East where they will face North Carolina Central. I'm riding high on the Cyclones and think they will go deep in the tourney.

The Cowboys of that school in Oklahoma are a No. 9 seed in the West regional after a tumultuous last half of the season. They will face No. 8 Gonzaga. Should they beat the Bulldogs, the Wildcats of Arizona will be waiting. The 'Boys could pull off the major upset, but the chances are slim.

The other school in the state to our north also earned a slot in the West regional. Oklahoma might be slightly over-seeded as a No. 5, but what is March Madness without some seeding controversy? The best part about OU and OSU being in the West regional is that there is the chance of Bedlam in the Sweet 16. It will probably never happen; both OU and OSU have very difficult routes to the Sweet 16, but what if it did?

Baylor is also in the West regional. Three Big 12 teams of the four Sweet 16 teams from the West anyone?

No.9 Kansas State faces perennial powerhouse No. 8 Kentucky in the Midwest bracket. Eesh. This match-up will occur in St. Louis, which is about equidistant between the two schools. Both schools should travel en mass for this one. I've got Kansas State only because I want to see them play Wichita State in a Sunflower State Showdown.

Our neighbors to the South wrap up the Big 12 entrants with a No. 7 seed in the Midwest where they will face No. 10 Arizona State. I don't see the Horns going past the third round; Michigan would flatten them.

There are zero sporting events occurring today. This is one of only two such days in March.

Baseball Misses on Sweep of No. 23 Texas Tech - BaylorBears.com

Baylor Baseball almost had the sweep. They led 1-0 until the eight inning when Tech capitalized on substitute left fielder Lane Kelly's error (the winds were 30+ MPH, so you can't exactly blame Kelly for missing a pop-up) and brought in two runs. Before the inning was up, the Red Raiders had added another five runs to put the game out of reach.

This is a great win for the No. 12 ranked Tennis team to wrap up their Spring Break road trip through California. The Bears return home with a 3-1 record from the trip, including 2-1 against teams in the top-10. I'm not sure quite how ranking works in the tennis world, but if it is anything like football, expect to see another Baylor team in the top-10 when new rankings come out.

Finally, because it is Monday, I'll leave you with something to brighten your morning.