Welcome to the Big 12 Men's Basketball Tournament, where nine competent teams battle for the top spot in the best conference in the land. Day one features your Baylor Bears against the fearsome, mauling, planet-asploding TCU Horned Frogs.

Today's Daily Bears Report is brought to you by the dinosaur of a computer in my parents' guest room since I left the charger to my shiny Mac in Waco. Here's to hoping my first DBR using HTML view only isn't a complete train wreck.

It's that time of year, folks. The hills and valleys of the regular season are gone, and from this point on every basketball team in the country is fighting for its life. This begins with conference tournaments. To some, they are just resume padding. To others, they represent that last quality win needed to make it to the Big Dance, or the last glimmer of hope for a run and an automatic bid. 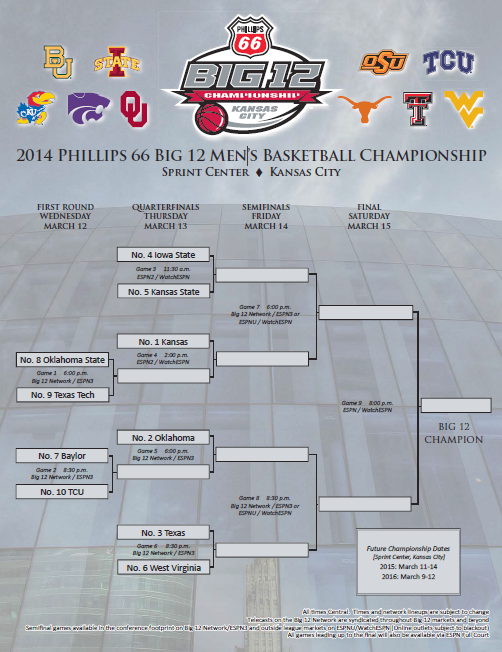 Fill out your bracket - it's gonna be brutal. For Baylor, the conference tournament lies somewhere between the first two categories. Few would deny the Bears' right to a bid at this point, and some bracketologists have Baylor as high as a seven seed. The tournament presents a golden opportunity to score victories against Big 12 teams that eluded us in the regular season. Texas and Oklahoma occupy our side of the bracket, and a matchup against the Sooners is the next step if we take care of business against TCU today.

It will be broadcast locally and can be found on ESPN. The Horned Frogs haven't been much of an obstacle for anyone this year, and currently stand as the only team in the country without a single in-conference win. Our only goal is to enforce the status quo. Baylor's 33-point victory on February 12 remains the largest margin of victory posted in the conference this season. A healthy Kenny Chery and favorable matchups for Baylor's big men should give fans no shortage of confidence heading in, but TCU must not be underestimated. This is the same team that came out of nowhere to sucker-punch Kansas last year during league play. Tune in and get ready for what should be a ton of fun tonight in Kansas City.

Baseball Drops 7-2 Decision at No. 30 Houston - Baylor Bears Official Athletic Site - BaylorBears.com
Baylor baseball fell 7-2 on Tuesday evening against No. 30 Houston at Cougar Field. The Bears (8-8) scored two in the first but could not hang on as the Cougars (12-3) scored seven unanswered runs.

I don't know enough about baseball to offer any meaningful analysis on why a team that can beat Cal State Fullerton two out of three times can't dispatch teams like Houston or Arizona State with consistency.

Next time, on Our Daily Bears...

I've bounced the idea off of Mark and the necessary on-campus personalities, and hopefully in the next month I'll be writing up and posting a longformish feature on Joy and Lady, Baylor's live mascots that live on campus. It will include little-known details about their day-to-day lives, relationships with trainers, enrichment activities, and even personal quirks and behaviors. I'm really excited to put it together and offer a unique look at just one more of the things that makes Baylor a special place to attend and cheer for.