Thursday Daily Bears Report: The Best is Yet to Come

With National Signing Day in the books, Baylor is poised to score even more points in the future.

Share All sharing options for: Thursday Daily Bears Report: The Best is Yet to Come

I'm busy, guys. I'm really, really busy. And really, really tired. That said, I always have time for Baylor sports, and this week is a big one on that front. Let's get to it.

The big news right now is the fact that we welcomed 23 new football signees the the Baylor family yesterday. The day was quiet for the most part, since Baylor wrapped up its recruiting early and wasn't left anxiously waiting for signees who had yet to reveal their full intentions. It's disappointing that safety John Bonney decided to stick with his commitment to Texas, but otherwise everything went swimmingly but for a few hiccups that we'll address later in the post.

The official 2014 class as it appears right now:

The class features four junior college transfers that are set to contribute immediately. Most of us here at ODB are extremely excited about Jarrell Broxton, a mauling guard out of Lackawanna College. Broxton is projected to contend with Laquan McGowan and one of both Muir brothers for Cyril Richardson's position at left guard this spring. As the spring game approaches, keep your eyes peeled for news on this particular position battle.

Transfer linebacker Grant Campbell looks like a new and improved Eddie Lackey on paper, and he is expected to begin contributing immediately as an outside linebacker. Chris Sanders and Tion Wright top off the crop of transfers as probable immediate contributors at corner. Sanders is a talented ex-Georgia Bulldog who brings an ambiguous personal history but a lot of talent to the position, and I trust Briles and Baylor to take care of him more than pretty much any other coach and school in the country.

Three other players in the class are already on campus. We've heard plenty about Davion Hall, but Terence Williams and Jordan Feuerbacher are both integral parts of the class who will be integrated into the Briles machine early. Feuerbacher is a physical and quick tight end who can make waves in the receiving game, and Terence Williams is a bruising power back. I can personally attest to Williams' skill; I saw him play as a junior during my senior year of high school. His speed was impressive, but even more baffling was his ability to shake off tacklers in a way reminiscent of Clarence BEEFTANK himself. We may have a more savage version of Glasco Martin in this one.

T'Kevian Rockwell (future All-Name Team member) and James David both failed to sign today. Initial reports say that David is held back by academic issues and signed with Navarro. Rockwell's issue is hazy to me at the moment, but hopefully it is resolved soon and we'll see the four-star defender suit up in the fall.

Some of my other personal favorites from the class (besides the obvious in WR K.D. Cannon) include Verkedric Vaughns and Chris Platt. Vaughns hails from Mesquite Poteet and played both receiver and corner in high school, and has the physical tools and competitive spirit to be an excellent performer after some time with Kaz. Platt is a national top 300 recruit with the speed to burn defenses in a way similar to Tevin Reese, who will be one of our most-missed graduates. All in all, it looks to be a fantastic class that may eventually be overshadowed by 2015.

What you need to know about the Big 12's recruiting classes

What you need to know about who each team will be bringing in next fall.

These are the best names of players you'll hopefully be hearing from often in the years to come.

Receivers highlight Baylor's Signing Day class
All of the fireworks surrounding Baylor's 2014 class of signees happened months ago. Since then, there hasn't been much to report.

Baseball is picked sixth of nine teams in the Big 12 preseason poll.

MBB heads to Norman on Saturday. Tipoff against the Sooners is at 6:00 PM Central.

The Lady Bears take on Oklahoma State in the Ferrell Center for a second contest with the Cowgirls. Tipoff is at 3:00 PM on Sunday.

I'm putting this here because it might be the first time a Baylor fan has wanted to hear good news from Aggieland. I've had my dog, a standard poodle (go ahead, judge me) named Penny, since around first grade, and I found out night before last that she has significant lesions in the lining of her stomach that are indicative of cancer. The vet sent some tests to a friend at A&M and we'll hear back on Friday. I know that there are bigger problems in the world, but I've never lost a pet and after moving several times throughout my childhood, I am more emotionally invested in this lousy dog than I've ever been in most friendships. If our fears are confirmed, I'll get to see her for the last time on Saturday. If you read this far, then you got the honor of hearing about the best dog ever. Of all time. 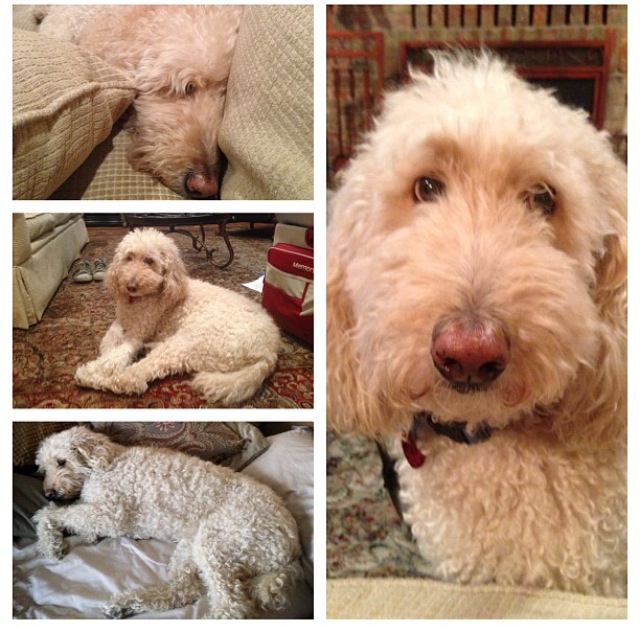