Men's Basketball played one of their best halves of the season yesterday en route to their fourth straight win, the Lady Bears cruised past TCU, and Baseball and Softball combined for 28 runs in two victories.

Share All sharing options for: Sunday DBR: Looking Up

Everything is looking up for Baylor sports on this fine Sunday morning. Baylor Men's Basketball have now won four games in a row and are sitting on the right ride of the Tournament Bubble, TCU proved no trouble for Mulkey's Team of Destruction, and the Softball and Baseball teams steamrolled their opposition yesterday. 'Tis indeed a good time to be a Baylor Bear!

Unfortunately, it isn't the best time to be a fan of US Hockey. The last three days have been extremely rough for the Americans with as many loses. As bad as losing heartbreakers to Canada are, the Bronze Medal game yesterday was probably worse. The United States completely vanished from the game during the second period, especially after Kane missed two penalty shots (why wasn't Oshie put in?!). We would still crush both Finland and Canada in both types of football, so there's that.

Unless I am mistaken, yesterday was the first time this year all four of these sports have had a game on the same day. Fun stuff!

Baylor scored a whopping 52 points in the second half to overcome West Virginia in Morgantown. Royce O'Neele had the best game of his career, scoring 22 on 8-8 shooting, including four treys. Brady Heslip became the 27th player in Baylor history and the ninth under Scott Drew to reach 1,000 career points. Sic 'em Destroyer of Worlds!

Two of the most important stats from the second half: zero turnovers and nineteen free throw attempts. Baylor only had four turnovers the entire game, but an entire half without turnovers?! That is impressive. Nineteen free throw attempts might not seem to be a significant statistic, but when Baylor only reached the line twice in the first half, the change of tactic that lead to more fouls drawn was incredibly significant.

All in all, this was a much-needed win for the Man Bears. They on a win streak at a crucial time and a Tournament bid is becoming more and more likely. The Bears will take on the reeling Longhorns this Wednesday in Austin. Texas lost 54-85 last night to Kansas.

Are we sure TCU even has a basketball program? The five players in white and purple on the floor yesterday shot 25 percent for the game and did not even score until nine minutes of game time had elapsed.

Due to the early morning start (probably), Sims and company did not have the best game. Sims tied her season-low of 17 points (it says something about how good she is that her low is more than most players' season-low) and the Lady Bears only scored 30 points in the first half. Still, TCU was never in this game.

First of all, if you have the chance to make it out to the Baylor Ballpark, take it. We have one of the best collegiate ballparks in the nation here in Waco with the added bonus of an excellent view of McLane Stadium. Add in perfect weather and Baylor crushing the opposition and you've got yourself one heck of a Saturday.

Now for the game. Baylor put up three runs in the first inning and never looked back. Austin Peay had a couple of chances, but starting pitcher Brad Kuntz put on a show with seven strikeouts and only gave up one run. In my opinion, Kuntz will be a huge asset to this team. Despite trailing 7-1 heading into the bottom of the seventh inning, Austin Peay still was in the game. Then the Baylor bats opened up in the bottom of the seventh.

The bottom of the seventh was a blood bath. After the first three runs, I wanted Baylor to "Finish Them!". Then, as the runs kept coming, my reaction turned more towards this. Eight runs later, the carnage was finally over. The last two innings were a mere formality.

The Bears will attempt to sweep Austin Peay today at 1:00. With a win, coach Steve Smith will become the 36th active coach in NCAA Division I baseball with 700 or more wins.

No. 15 Softball Bounces Back with 13-0 Win over California - BaylorBears.com

Continuing yesterday's batting sports success, the Lady Bears obliterated the Golden (Lady?) Bears at the Mary Nutter Collegiate Classic. Paralleling the baseball team, softball put up a massive seventh inning to slam the door on the competition. Clare Hosack had five RBIs, including a grand slam. Pitcher Whitney Canion (which is an epic name for a pitcher) struck out three and only allowed two hits in six innings of work.

The Lady Bears take on Northwestern at 11:00 a.m. CST in their final game of the Classic.

In case you missed it like I have, the tailgating locations at McLane Stadium have been announced. Students will be on the campus side of the river while most of the general tailgating will be located in the grassy section around the "Baylor Basin" lagoon in between McLane and the track stadium.

Thankfully, there will be enough facilities to suit the needs of 45,000 people, unlike the Case.

Again, for all of your Combine needs, check out the Combine thread.

Baylor are 17 strokes back of Houston, but are within three of third place South Carolina. The final round of golf begins today at 8:30.

Baylor Equestrian defeated SMU 13-3 at the Fresno Invitational. Hopefully there will be an official write-up soon. Be sure to follow Coach White for the most up-to-date news on the equestrian team.

Acrobatics and Tumbling are in Hamden, Connecticut to take on Quinnipiac at 10:30 CST. - BaylorBears.com

Syracuse drove the lane and made the game-tying layup. That is, until a charge was called and the bucket disallowed. Then Jim Boeheim went insane. Naturally, the Internet responded.

THE EYES OF TEXAS ARE UPON THE NETFLIX QUEUE

Fake Dan Beebe is one of the best parody accounts out there.

This student. As an engineering student, I highly approve and am slightly jealous.

U of Iowa flag stunt during the National Anthem Saturday pic.twitter.com/dcBNHKV2A5 (H/T @BeanSillie)

Iowa did something cool. Iowa State is still better though (because Big 12).

The Notebook: Jadeveon Clowney is ready to be molded into a monster - SBN

The Texans could take Clowney as the first pick of the draft. Can you imagine J.J. Watt and Clowney on the same defense? 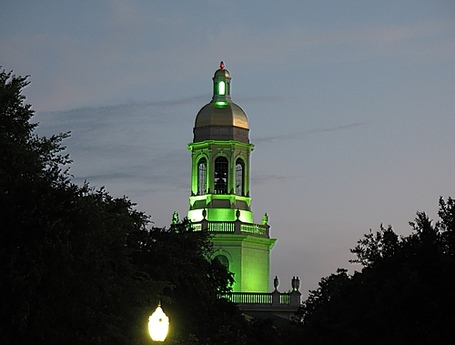 Pat Neff is gorgeous, but you knew that already.