Baylor basketball has a pulse. It's subtle, and even the slightest trauma could cause it to vanish forever, but it is there.

The image above should be a rough approximation of Scott Drew's reaction to last night's double overtime win. Baylor's season isn't a complete loss, but it's hanging by a thread. It will take a few more quality wins, including a game tomorrow versus Oklahoma State in the Ferrell Center, to get the Bears back on the right side of the bubble, and a good showing in the Big 12 tournament could catapult us into the tournament. I know Mark was compiling reactions to the game on Twitter, so those will likely be dumped here at some point in the morning.

Kenny Chery had a stellar game, putting up the sixth triple-double in school history (a feat that I was surprised Pierre Jackson never achieved), and the first since Ekpe Udoh's several years ago. The game was a nail-biter, a punch-your-television disaster, and a dunktastic whupping of the Wildcats at different points. Thankfully the last bit will be what we remember.

Brady Heslip is the king of Waco.

And the Destroyer of Worlds, Ubbs. Remember that. Brady is your lord.

Today is game day for WBB, and Odyssey Sims & Co. look to continue their recent dominant streak versus the Lady Longhorns in Austin at noon on Fox Sports 1. The Lady Bears took the last matchup by 14 points, but Texas isn't a team that will just roll over. Prepare to be entertained.

Baseball was once again at Arizona State, where they fell to the Sun Devil by a score of 7-4. Several young players have show signs of great things to come, particularly Darryn Sheppard, but errors have also been a theme so far. In fact, there have been seven errors in two games. Coach Smith's men need to clean things up if they expect to go far this season, but they'll be off to a great start if they can close out the series with a win today at 1:30.

The Best of the Rest

No. 6 Men's Tennis fell to the No. 3 USC Trojans yesterday at the ITA Indoors. They'll take on No. 12 Oklahoma at 9:00 this morning in the consolation round. The loss came in the quarterfinals of the tournament.

Felix Obi is a freak athlete, and multiple personal and school records were shattered when the Track Bears were in action yesterday.

No. 2 Baylor Equestrian beat No. 8 TCU yesterday. It involved lots of prancing, cantering, jumping, and magnificence, and beating TCU feels good in every sport.

Softball took a loss in Day Two of the Getterman Classic in Waco. Baylor's six-game win streak came to an end when Lipscomb (7-1) outlasted the Lady Bears 1-0 before BU rebounded with a 2-0 victory over Iowa.

Women's Tennis fell to Vanderbilt yesterday that the Hurd Tennis Center by a margin of 4-3.

After Team USA's thrilling victory over Russia in Olympic hockey, the Mothership put out this tweet:

If you spend as much time on the internet as I do, you probably already know the origin of that amazing picture of Ronald Reagan charging across the ruins of the Berlin Wall atop a velociraptor. SharpWriter, a user on DeviantArt, produced a series of pictures a few years back that depicted notable U.S. Presidents as action heroes, because we get some kind of giddy joy from thinking of our former leaders as sci-fi warriors. I've elected to include some of my favorites below to get you internet-folk in a patriotic mood for the rest of the games. 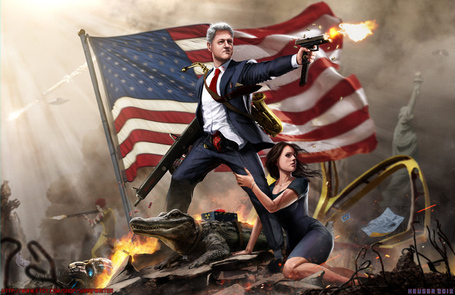 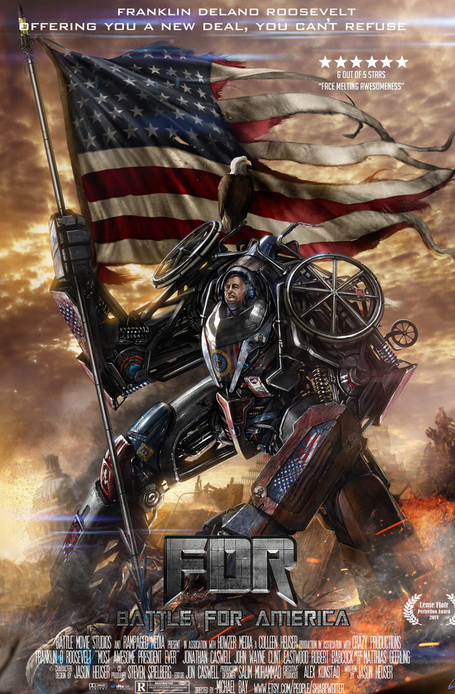