What we pretty much knew but didn't really know for sure is now official: the Baylor Bears will take on the UCF Knights, led by Blake Bortles, in the 2014 Fiesta Bowl in Glendale, Arizona.

Your Baylor Bears will now officially face off against the Central Florida Knights on January 1, 2014 in Glendale, Arizona in the Tostitos Fiesta Bowl.  If you haven't already, start planning your trips and buying your tickets accordingly.  From what we've heard already, pickings are pretty slim in the hotel department.

Baylor Nation: Your Bears are headed to the @FiestaBowl. Tickets are now on sale: http://t.co/kMg52QuK8c. Opponent still TBA. #SicEm

Travel with the Bears as we make our first trip to the Fiesta Bowl. Visit https://t.co/QlKxRLhwzR for info on the Official Baylor Bowl Tour.

Our friends over at the mothership are already previewing the game very generally for interested in a look nearly 4 weeks out.  We're going to wait a little while longer here at ODB before wading into those waters in order to savor the Big 12 Championship our fanbase waited so long to earn.  I will say, since I've gotten more than a few questions about this, that we are playing UCF because they qualified for an automatic bid to the BCS by winning the American Conference (the former Big East), and the Fiesta Bowl had the last pick this year among the 4 bowls.  So when others (Sugar, Rose, and Orange) took teams like OU and Alabama with their at-large and replacement selections, UCF fell by default to the Fiesta.  That's not a slight against UCF at all; it's the way the system works.

Please note: UCF is NOT the Golden Knights and has not been for nigh a decade.  They are the Knights.  This is apparently a big deal to them. 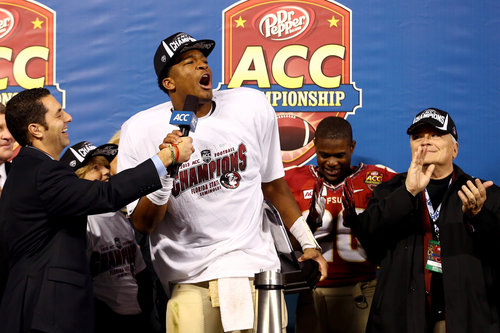 Florida State and Auburn are set for what should be an intriguing national title matchup. And we've got 34 games to enjoy until then.

We'll never know for sure why/how Oklahoma managed to squeak out a second BCS bid for the Big 12, but we can probably guess.  Next year, in the new bowl alignment outside the CFB Playoff, the Sugar Bowl becomes aligned with the SEC and the Big 12.  By taking Oklahoma now rather than, say, Oregon, they're simply starting the arrangement a year early to build rapport.  It makes perfect sense in the typical "this is a football game that isn't really about football" way of bowls.