Had a little down time before the wedding this evening, so I started looking at UCF's offensive stats and important players on the season.

2013 UCF football's 10 things to know: Can the Knights find consistency in the AAC? 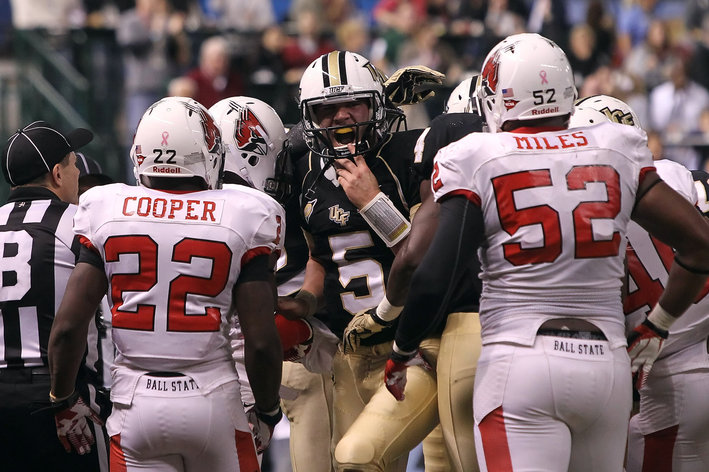 No, UCF is not taking on a massive upgrade in its new conference. Still, it's a sign of accomplishment that the Knights are already one of the more stable programs in the American.

Depending on how you feel about Clint Chelf in his performances against non-Baylor teams, Blake Bortles is either the best or second best QB we will have faced this season.  I've found a couple of things discussing Bortles, a junior, mostly as a prospect for the upcoming NFL Draft on places like NFL.com and SI.com (two different links to stories).  Peter King reported in MMQB last week that there is at least one team that thinks Bortles might be the top QB in the Draft, and that wasn't even assuming that Teddy Bridgewater stays in school.  That was the entire draft, period.  I also found several links to pictures of Bortles' girlfriend that I'll let you find on your own.

We don't know yet if Bortles will leave school this year or not.  As I said, he's a junior and could decide that coming back to what should be a pretty good UCF team next year might be a better move.  With next year's crop of QBs led by Jameis Winston (draft-eligible sophomore), Marcus Mariota (junior), and Bryce Petty (senior), however, leaving now could be right.  I don't know.  It doesn't matter.  We're playing Bortles this year, regardless, and he's really good.  Here's the year he had in 2013:

This season, the 6-4, 230-pound Bortles was able to increase his passer rating by nearly 20 points, up his yards per attempt by over a yard and a half, and complete 5.2% more of his passes.  He was intercepted just 7 times on the year against a UCF schedule that FEI ranks as 76th in the country in terms of defenses.  Their best opponents in terms of defensive F/+ were South Carolina (19th) and Louisville (22nd).  Baylor, for reference, is 15th at this point in defensive F/+, which is, once again, the combined ranking result of FEI and S&P+.  Bortles' 2013 game log, courtesy of Sports-Reference.com:

Even with the two interceptions, pretty good game against South Carolina on the whole, right?  Not as good as the beatdown he gave Connecticut, but that'd really hard to top.  Unless you're Bryce Petty playing Buffalo, I mean.  His favorite receiver, Ronnell Hall, leads the team with 53 receptions.  Nobody else has more than 40.

Let's look at the rest of the UCF skill players on offense, just to see how they stack up.

I'll get more into UCF's advanced stats in the next week or so, but we can take a brief look here from the 30,000 foot level.

At this moment, UCF will be the highest-ranked offensive team Baylor has played this season outside of intrasquad practice.  They pass the ball well with Bortles and friends, run it well with Johnson and Stanback, and are generally very efficient across the board.  They're a very good team.  That the absolute stats don't generally agree (total offense: 45, passing: 27, rushing: 79) shows the difference between counting stats and efficiency stats.  UCF isn't what I would call "up tempo", so their counting stats suffer.  They're still quite efficient.  Baylor's defense will have to be ready.