You want to help? You want a dope T-shirt? Boy have I got a deal for you!

While the initial outpouring of support for West, Texas in the hours and days after the tragedy were amazing, it's important to remember the truly enormous long-term task that lays ahead of those who are trying to grieve, survive, and rebuild. To that end, I'm happy to report that one of Baylor's own, Phil Taylor, is starting a new T-Shirt fundraiser for West. Phil Taylor transferred to Baylor from Penn State and won All-Conference honors for his play at defensive tackle. After being drafted in the first round by Cleveland, Taylor has been a very good player along Cleveland's defensive line. As a defensive tackle, Taylor doesn't have as much celebrity as some of the more glamorous positions, but he's lending what celebrity he has to this cause via his charity, Taylor Made '98.

You can buy the shirt from Taylor's website here.They are $25 plus $5 shipping and 100% of the proceeds go to the families who lost a loved one in the West Explosion. Their goal is $100,000. As a way to raise awareness, they're asking people to post pictures to social media wearing the shirt. If you tweet out a picture with the #WeAreWestTX tag, @PhilTaylor98 will retweet. Also, BU Athletics has a post about it here with a little more information about Phil Taylor.

Also, because I can't help myself, here are some pictures of a 300 lb man wearing a T-shirt with a teddy bear on it. 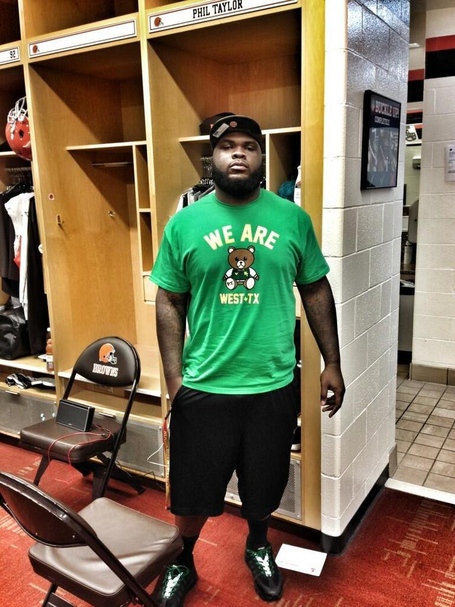 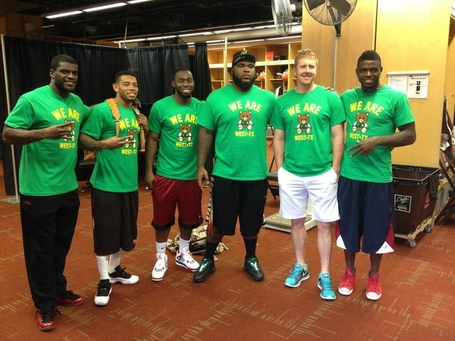 To the surprise of absolutely nobody, RG3 is a boss: