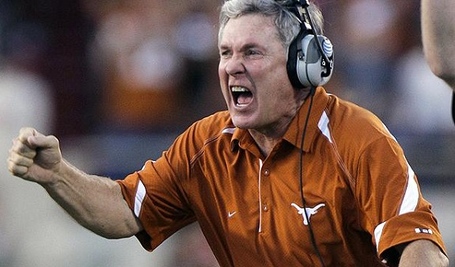 Mack Brown is arguing that Burnt Orange is indeed uglier than "The Brightest Orange" via 4.bp.blogspot.com

It's about time we had a poll for this. I have tried to compile a short summary of the pros and cons of the two teams winning, but the decision is up to y'all.

As we all know, Okie Lite travels to Austin on Saturday to take on the undefeated-in-conference Texas Longhorns. This game has huge implications for Baylor, regardless of who wins.

A Texas victory could very well lead to a defacto Big 12 Championship in Waco on December 7th. If Texas gets past OSU, it is very likely they remain undefeated until going up against Baylor, as they only have Tech between the two games. There are several benefits to an undefeated Texas: the aforementioned Championship game would be easier for Baylor to win in Waco than in Stillwater, Texas has the "historic name recognition" factor that OSU does not, and if Texas can beat OSU, why can't Baylor? Texas would probably end up in the 20s or low teens of the rankings if they won out. Baylor would presumably be 1-5 at that time. Other than OSU, Baylor will not have another ranked team left on its schedule. If Texas lost, there would be very little chance of them returning to the top 25, leaving Baylor with only one ranked team in its last four games. An undefeated Texas is also an excellent showcase to end the season and the Case's tenure as the home of the Bears.

The obvious pro to this choice is sweet, sweet Longhorn tears. I think we all can agree that Texas has been very lucky in recent games and don't really deserve to be undefeated. Oklahoma State is currently 8-1 (5-1) and still very much in the hunt for the Big 12 title. After UT, OSU faces Baylor and finishes up with Bedlam. If OSU beats Texas, the defacto Championship is moved from Waco to Stillwater, a place Baylor has not had success in...forever. Baylor has the talent to beat both teams, but Stillwater is an incredibly intimidating environment for the visiting team. However, Oklahoma State will more than likely be a top 10 team when they play Baylor if they beat UT. If OSU loses to UT, they should be ranked in the low teens when they play us.

Somethings else to consider:

"@TheJayyySkee: If Texas and Baylor win out, any chance @CollegeGameDay heads to Waco?". We could. Also, maybe next week in Stillwater

Who do you want to win?