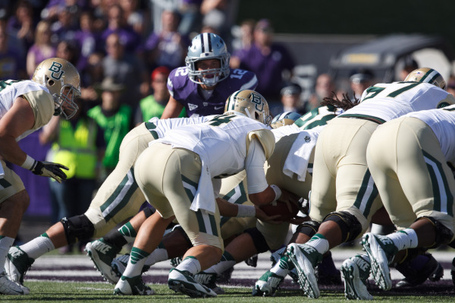 Big Uglies, Hog Mollies, Fat Guys, Maulers, Bruisers, whatever you want to call them, the offensive line is backbone of Baylor's high octane offense. Sure Petty throws a pretty ball, Lache has the agility of a jungle cat, and Reese and Goodley have ludicrous speed, but without the girthy men up front there would be no time to throw or holes to run through.

I re-watched the game grading the play of the O-line against the snydercat defense to see how well our O-line did. I've been wanting to do something like this for quite some time but I never have found a full game vid on Youtube as early as I have this week.

If they passed all three criteria they got a score of "1," if not then they received a "0." Penalty plays were not counted as full plays and instead the lineman who caused the loss of yards was handicapped for the next play. This means that if they were make a good block on the ensuing play the best score they could get was a "0." If they failed to make a block on the next play they would receive a "-1." (*Note: I did not grade TE or RB or FB blocking)

As you can see, Cyril graded out as our best blocker that game with Drango a distant second, Huber and Hilliard tied at 86% and Palmer bringing up the rear at 84%. This gave us an average grade of 88%, or a B+ in most books. At first that sounds like a pretty generous grade given that we were held to our lowest output in both total yards and rushing yards. But remember, some of our failed drives were due to drops by receivers, Lache missing some open holes and cutback lanes, and our TE's missing some blocks as well.

When you look at numbers, the overall grade was helped tremendously by the pass blocking on Saturday, or brought down by the run blocking (depending on how you look at it). There were 10 plays that had one or more missed run blocks compared to just 6 passing plays. But what was significantly different was the number of failed blocks total for each category. There were three times as many bad run blocks (24) as there were bad pass blocks (8) and it was somewhat evenly spread out among the lineman.

Also of note, all three penalties called on the offensive line were drive killers with each possession ending in a punt. Two of those penalties negated first downs as well. They were a block in the back by Cyril (because he was too far down field out of the tackle box) and ineligible receiver down field by Huber. Both of these penalties were interesting to me because there seemed to be confusion on what kind of play was called and how to block for it. On both penalties Cyril and Huber were blocking as if it was a screen play or maybe a run pass option for Petty, but Petty was staying in the pocket looking down field to pass. Hopefully this was just a communication problem due to Snyder Stadium being so loud.

Conclusions: Overall the line had a good game. Credit the snydercats for maintaining their assignments and swarming to the football anytime Lache or Glasco had the ball, they made it really difficult to sustain blocks long enough to spring our RB's consistently. The O-line needs to establish themselves earlier as most of the missed/bad blocks came in the first half of the game. And Troy Baker cannot get healthy fast enough; we need him back to anchor the right side of the line (which saw the worst performances of the game).

How would you grade the O-line's performance against KSU?