New Developments in the Te'o Scandal-- Conversations with an Insider

The world of college football has been rocked this week by one of the strangest scandals in recent memory. Is it about to get even more strange? Grant Senter and Phillip Ericksen, ODB's newest contributors, have a few more details you should know.

Share All sharing options for: New Developments in the Te'o Scandal-- Conversations with an Insider

A note from MCM: I'm happy to welcome two new writers, Grant Senter and Phillip Ericksen, to the ranks of ODB. The pair has been writing for a separate blog, BearTreats, until I asked them to come aboard today. They accepted, and I'm glad to have them as part of the team. This is their first post, filed under Grant's name but written together.

The Manti Te'o situation has created countless opportunities for "regular people" to gather information. Social media outlets of today are extremely effective mediums for finding buried information, and we utilized it to become one of the first on the scene.

On the night of December 4th, a man known on Twitter as "jayRahz" went on a tirade exposing Ronaiah Tuiasosopo for hoaxing Manti Te'o into thinking Te'o was in a relationship with a woman online. We immediately retweeted @jayRahz, cognizant that something was amiss but not quite sure how everything fit together.

What has not been reported is the conversation we had with an individual close to the situation through our Twitter accounts. You are about to read a conversation that took place with a man who is related to jayRahz and knows Celeste Tuioti-Mariner (ceeweezy21, another friend), as well as Ronaiah Tuiasosopo. That man is Terrence Dado Luapo, otherwise known on Twitter as @BAMM90745.

The profile for @jayRahz is following him. They are related and have had a relationship for a long time.

This is our conversation... 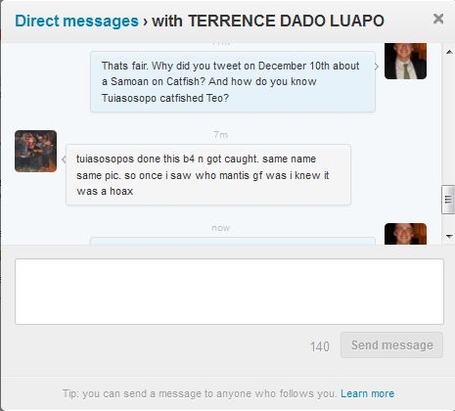 He has since deleted our messages.

What we know is that Terrence, jayRahz and Tuiasosopo all know each other. Terrence has just let EVERYONE know that Tuiasosopo has done this before.

The glaring significance of this is that until Shelley Smith's report today, no one had a clue that Tuiasosopo has had a history of deceiving people online. Terrence broke this information to us, then we reported it Our Daily Bears last night.

It was reported by our own SB Nation that Reagan Maui'a said that he met Lennay Kekua, Manti Te'o's fake girlfriend, face-to-face.

Our Daily Bears is the first to believe that the girl Maui'a met and thought to be Manti Te'o's girlfriend was either Celeste Tuioti-Mariner (@ceeweezy51) or her sister Nora Tuioti-Mariner (@noratuii), a volleyball player at Arizona State.

Maui'a is quoted as saying that she had a "volleyball-like physique" by multiple publications. It only makes sense that the girl he met, who he thought was Te'o's girlfriend, is either Celeste Tuioti-Mariner (left) or her sister Nora Tuioti-Mariner (right). The man who introduced the two was none other than the perpetrator: Ronaiah Tuiasosopo. This may have occurred in June 2011 at a football charity event in American Samoa. NFL stars Troy Polamalu and Rey Maualuga were present, though there is no reason to believe of their involvement in the story.

In this bizarre, college football-edition of Where's Waldo, we may be one step closer to finding who is truly wearing the red and white.