Share All sharing options for: How Baylor beat SMU on the scoreboard despite losing in the box score

Here at ODB, you’ll find that we are, in general, pro-statistics. College football doesn’t have the quality of statistical analysis that baseball does (for a variety of reasons), but the lack of great statistical tools doesn’t mean we should ignore what is available. Even for games that I watch, I like to check out the box score afterwards to see if there is anything that clashes with what my (amateur) eyes saw. However, there is a danger in just using a cursory glance at the box score to draw significant conclusions regarding the performance of the two teams in question. I can’t shake the feeling that many of the voters in the various CFB rankings use this approach for the games that they don’t watch.

As an example of this, here is a sampling of (most of) the box score from Baylor-SMU game. 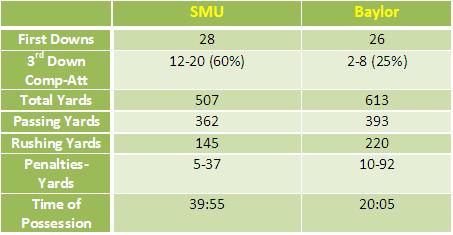 While this is a bit of cherry picking for a point, I don't think it's such a crazy idea that a significant number of voters checked out the box score of this game and focused on these statistics. They are amongst the most frequently cited in the AP summaries that get written and posted quickly after the game. But looking at these stats would have you believe that Baylor should not have won the game at all, let alone by a 35 point margin. SMU completely dominated the Time of Possession with a 2:1 advantage, performed better on 3rd down and committed less penalties. While Baylor out-gained them in yards (total, passing and rushing), these are the sort of numbers that lead to a 59-24 thrashing.

So did Baylor just get lucky? Hardly. As Mark mentioned yesterday, efficiency matters. But you don't even need to know (or understand) Football Outsiders' stats to see the importance of efficiency. After the jump, I've included some basic efficiency stats that are included in the box score but not often featured in commentary about the game in the mainstream media.

Ahh, this is much better. 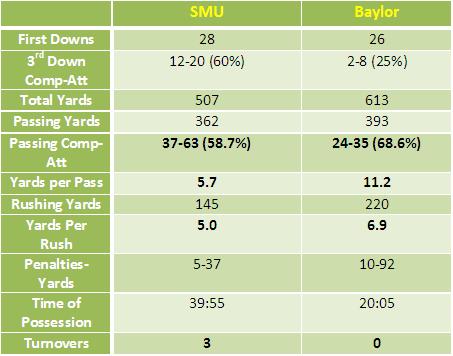 The big discrepancy in the most cited stats and the efficiency stats is seen in the passing stats. Despite passing for similar yardage, SMU needed a mind boggling 63 attempts to accumulate those yards leaving them with a paltry 5.7 YpA. Meanwhile, Baylor was on the other end of the spectrum with an incredible 11.2 YpA, strongly suggesting that the very good 68.6% completion percentage was not a factor of a dink and dunk offense.

Finally, Baylor won the turnover battle 3-0. Turnovers, while virtually impossible to predict, have a huge impact on wins and losses. From 2010-2011, an NFL team that finished a game +3, as Baylor did, won that game 93% of the time. Talk about the odds being in your favor...

In the end, the only two numbers that matter are 59 and 24. But since it's the first game of the season (and we have a bye this week), it's nice to know that it wasn't a fluky win either.