Baylor's offense gets its own turn to stake a claim in the second half of our preview for Saturday's game.

It probably won't shock Baylor fans, but it might some others around the country, that when the teams take the field on Saturday morning, West Virginia won't be the only one bringing a dynamic offense to the table. Pick whatever positive adjective you want to and it fits with Baylor's offense so far this season, which, outside of the first half against Sam Houston State and first quarter against ULM, has been extremely good. Nick Florence leads the country in total yards per game, Terrance Williams the conference in receiving yards per game, and Art Briles continues to stake his claim to the title of Quarterback Whisperer. It's weird to think an offense Briles runs could be overlooked, but it really might be at this point. I've seen numerous places predicting a Baylor score in the 30s, a mark we eclipsed in all but 4 games last season.

Looking to make that view reality this Saturday will be a Mountaineers defense that is ranked in the middle of the pack according to FEI and slightly better by S&P+, though how much stock we can put in either to have an accurate view of things is a question at this point. None of WVU's three games this season-- against Marshall, James Madison, and Maryland-- featured anything resembling a powerhouse offense on the other side of the ball. Of the two FBS teams they've faced so far, Marshall had the higher rank in OFEI at 26 and they managed to score 34 points against WVU's defense. Does that mean we'll definitely do better? No, but predicting we'll do worse probably doesn't make sense either. Even more troublesome, I don't know if a look at WVU's defense in 2011 will help us, either, for reasons I'll explain below.

Before we do that, here's their depth chart again on page 17 of this week's game notes.

Before 2011, you probably thought of WVU for two things: defense and Pat White. I did the same. But then I remembered that Bill Stewart, who took over when RR left for Michigan, was booted out the door rather unceremoniously for trying to undermine the coach-in-waiting he never wanted. All he'd done in 2010 was guide the Mountaineers to the best defense in the land according to defensive FEI. Given that Dana Holgerson is an entirely different cat, I blamed the dropoff from 2010 to 2011 on Stewart's departure without realizing that defensive coordinator Jeff Casteel didn't leave with him. WVU ran the same 3-3-5 in 2011 that they did in 2010, they just didn't do it nearly as well (@SmartFootball attributes this to an exodus of talent to the NFL). According to Bill C's "points per play" metric that gives a point value to every single play of the game, they struggled in particular against the run. Here's how they performed as a whole last season. 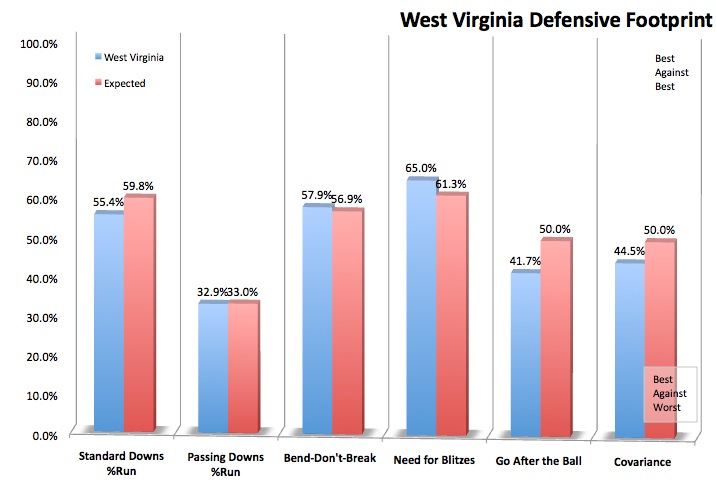 The reason we probably can't use that in a predictive way is that after the 2011 campaign, Casteel left WVU for Arizona to be reunited with former-WVU and incoming-Wildcat HC Rich Rodriguez. I have no idea which side decided that should happen, but he took the kid (the 3-3-5 defense for which WVU was known) with him. In his place, Holgerson hired Oklahoma State safeties coach Joe DeForest, who installed what is basically a 3-4 in its base but can show looks of a 4-3 (or a 4-2-5) by walking up a linebacker to play as another defensive end.

So what does that mean for us?

It's hard to tell how this defense will actually perform over the course of an entire season. On paper, they seem to have lost most of the production from a relatively average unit in 2011 and replaced those players with less-talented and less-experienced versions. Across the line we'll probably see Shaq Rowell (6-4, 3-8) at the nose with Jorge Wright (6-2, 289) at DT and Will Clarke (6-6, 269) the defensive end. The preceding sentence probably seemed strange to you because A) there's only one DE, and B) I told you they run a 3-4 and then listed a nose and a DT. That's why it's not a true 3-4 or 4-3. You can call it both because those are the three primary DL, but you could also consider their "Buck" position, manned by Josh Francis (6-4, 225), another lineman in certain situations. Most of the time, the Buck lines up on the strong side of the formation, switching sides with the DE as necessary, and plays from a two-point stance as basically a rush linebacker. When there is no tight end in the formation, he'll line up where the RB is rather than where the majority of the WRs are. Very rarely, they'll replace him with an actual defensive end. No matter where he is, the rest of the line shades to the opposite side so it looks like a normal 4-man front with a DE playing in a 2-point stance. You don't have a true nose playing head up on the center and two five-techniques on the tackles UNLESS the offense plays with a tight end. Then the Buck lines up on his outside shoulder. You'll see what I mean in the video below.

On the whole, WVU rarely substitutes that I can tell unless they go to a dime look with an added defensive back. It's not like what we do because they keep the front four intact; they either pull back Terrance Garvin (6-3, 221), who they call the "Star" or replace him entirely with another DB.

On paper, it doesn't seem like this group would be as good as past WVU defenses have been, especially after losing quite a bit on the defensive line from last season. So far, however, they have been effective against the run, mostly by racking up 29 tackles for loss in 3 games, and blistering in the pass rush with 10 sacks. It's worth nothing that five of those sacks came against an overmatched Maryland offensive line (and contributed to Maryland's offensive woes in general) with 4 against James Madison, but the number itself shows that they are capable of getting after the QB. Francis and Garvin lead the team with 2.0 each. It will be pivotal for us to keep them, particularly Francis, out of the backfield and Nick Florence's face. I'm confident with Florence's quick release and an offensive line better than any they've played this season, as well as the screens Briles loves to run, we can negate that pass rush somewhat.

If we do, we should be able to take advantage of a secondary that has only come up with 3 interceptions, one in each game, this season, and is allowing more than 275 yards through the air each time out. The starters at CB for the Mountaineers are Brodrick Jenkins (5-10, 187) and Pat Miller (5-11, 183), both of whom returned from last year's squad in their same roles. From what I can tell, they aren't nearly as aggressive on the outside as we've already seen this season from SMU and Sam Houston State, and play mostly zone coverage with Karl Joseph and Darwin Cook at the safeties. Interestingly, Karl Joseph is a true freshman this season, which, as Bill C notes, could either be really good or really bad. We'll get to find out together.

The only two starters on their defense I haven't mentioned are will LB Doug Rigg, who is probably more of a run-stuff at a stout 6-1, 241, and redshirt freshman Isaiah Bruce (6-1, 225). Bruce leads the teams in tackles per game (10) with Garvin close behind.

For reasons of time (it's already Thursday afternoon, after all), I won't do a separate post about their defensive film like I did their offense. We also don't have the same look at the Maryland game. Instead, we have a video of every offensive play Maryland ran cut by SB Nation's blog MockingtheDraft. In it, you should be able to get a feel for how their defense operates. Pack a lunch if you go to watch it, though, because it's almost 20 minutes long.

It's hard to assess their defense simply because they haven't played anything even remotely resembling our offense, an observation which, of course, can easily go the other way. We'll be their biggest test the same way they will be ours. Our pace, something the WVU side has identified all week as an important factor to this game, will also be completely different than anything they've seen. They don't sub much as I said, but they might need to when we're running plays every 11 or 13 seconds on offense.

I will say that I'm not overly impressed by what I've seen on the film or in the stats, and I don't think they're going to stop us as long as we protect Florence and give him the time to pick apart their zone. So far this season they've been pretty good against the run, so if you were expecting this to be our breakout game on the ground, you're probably going to be disappointed. They pay for that success, a lot of which comes through blitzes, in the passing game, and I think that will be our biggest focus. Though experienced, their corners play way off the ball by either talent or choice, and that's probably not going to work against receivers the likes of Terrance Williams, Lanear Sampson, and Tevin Reese. They're simply too fast and too good at finding holes in the defense to make that kind of a scheme work unless you have absolutely tremendous athletes.

If I had to guess, I'd say we're going to see a lot of Jarred Salubi in this game once again because of his abilities in pass protection, so we might not FreeLache! either. I hope you're not all too downtrodden by that because I'm not trying to be negative. Like I said, I think our offense as a whole should play extremely well. The only question is whether it will be enough to overcome our defense.

Look for the official prediction thread tomorrow (with my prediction attached) after we've had a little bit of time to gather more information. As I find more nuggets about either side, I'll make sure to update both previews. And as always, if you think I'm 100% wrong on something please say so; pride won't be the reason we don't have all the information we can.