Many college football fans had many questions about Nick Florence and his ability to replace RG3 coming into the season and seemed to do a good job answering them against SMU. Here is a look at how Art Briles and the Baylor offense were able to exploit was SMU was doing. We will walk through 4 touchdown plays.

The first TD was a smart play based on good scheme. Pictured below is a still capture of what SMU was looking at pre-snap. You have the corners and safeties in quarters with 3 linebackers in underneath zones with one linebacker blitzing. Baylor has lined up in the shotgun with 3 WR, 1 RB, and 1 TE. 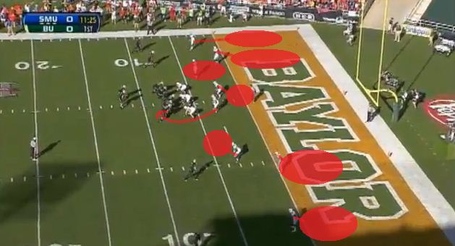 The next frame shows how BU is going to use what offenses call a rub route and what defenses call a pick play. The slot WR is going to run a vertical hitch route to occupy the safety (circled) and outside WR Lanear Sampson is going to run an underneath route across the field beneath him which is drawn in yellow. Baylor also runs a play action fake to freeze the linebackers. 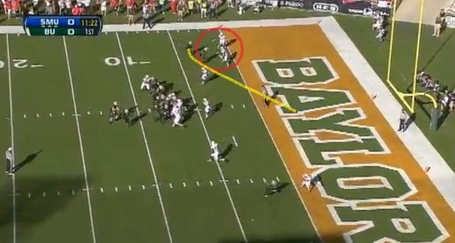 The end result is pictured below. The play action fake froze outside linebacker Ja'Gared Davis who cannot find the WR and the Slot WR's route prevents the corner (circled in red) from even having a chance. 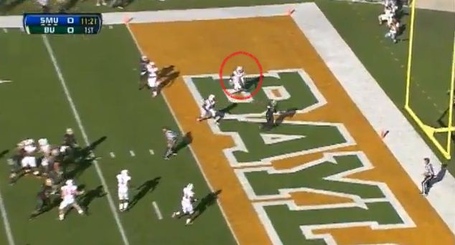 Well designed and well executed by the Baylor offense.

On his next touchdown Nick was able to once again use play action in the red zone. In the picture here you can see Baylor line up in our 3 WR & 1 TE set with TE Jordan Navjar lining up as an H-Back circled in yellow. 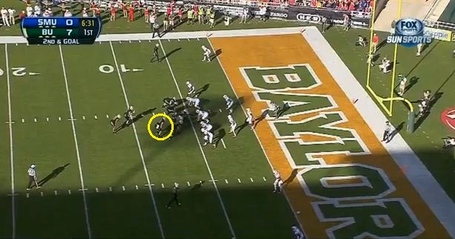 Now we will cut to a still frame right as Nick is faking the handoff to Salubi. You can see that OLB Ja'Gared Davis, ILB Cameron Rogers, and Safety Jay Scott are all looking to stop our run play and Davis is crashing in to take away the inside run. You also see Navjar faking like he's going to block Rogers and I have Jordan highlighted by a green arrow. 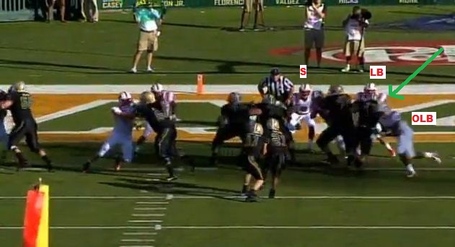 As a result of the good fake by Nick we see Rogers unable to both honor the run threat and stay with Navjar. Touchdown. 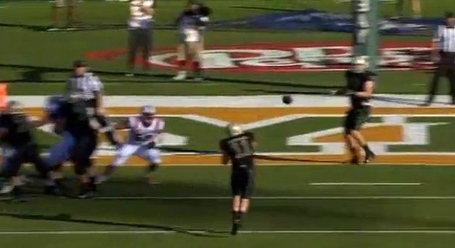 Nick also had success with two kinds of deeper concepts throughout the day that also resulted in touchdowns. Just before halftime Baylor was up 14-3 with the ball at midfield. SMU wanted to take away our running lanes so they lined up in Cover 3. They had each corner and Safety Ryan Smith take 1/3 of the deep part of the field.

Baylor is going to run Tevin Reese on a vertical seam route and outside WR Terrance Williams on a hitch. Before the snap SMU rolled their safeties over to the offense's left to allow the other Safety Jay Scott better position for run support. 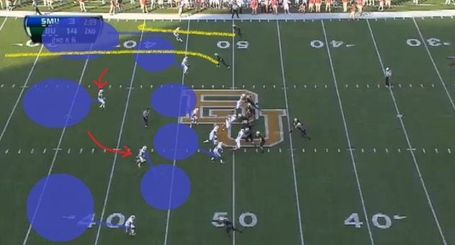 The only problem with that is this takes Smith out of position to help effectively on Reese's route. With the deep 1/3 corner having to deal with both Williams and Reese one of the two will come open as the underneath Linebacker is both too slow to keep up with Reese and his responsibility is re-routing the WR off the line and helping cover the short zone to the flat. The picture I captured was the moment Nick finishes his play fake. Smith has no shot of catching Reese (red) and the OLB Worthen (yellow) has forced Reese wide but clearly has no chance of defending the seam route deep. 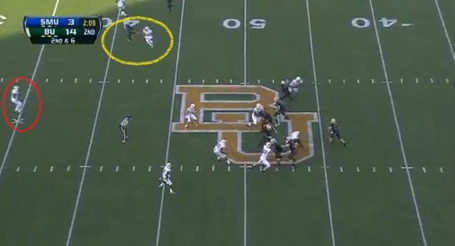 With Tevin Reese open Nick does a great job of getting the deep throw out on time and on target. Smith can't cover the distance of over 23 yards from when he first read pass and it's 21-3. 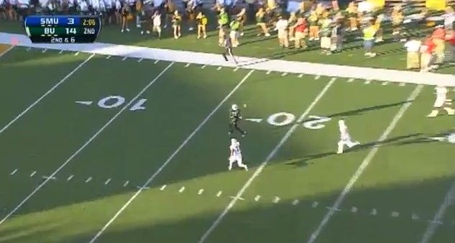 Nick's final TD was probably the most assuring for BU fans concerned about his arm strength. SMU lined up in Quarters as they had not experienced much success using Cover 3. With the vertical routes we used it ended up to where it was almost like soft man coverage with the safeties helping the OLB's with the TE and Slot WR deep as we see pictured below. The corners take the WRs and the circled LB is responsible for the running back. 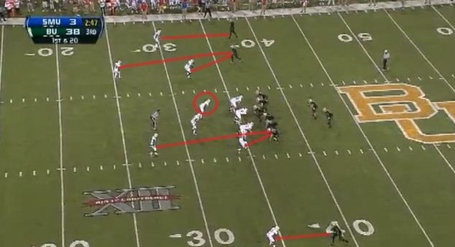 In the next photo we see Nick faking the handoff again which forces the safety to honor the run threat. This limits how much help if any he can give the corner. It's the same way we isolated TCU's corners in 2011. 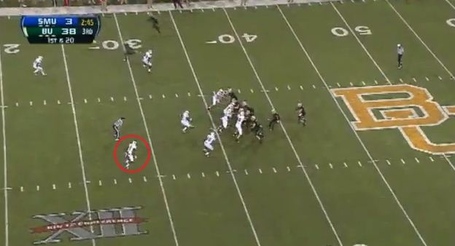 In this final frame we see the result of Nick's accurate deep pass and Lanear beating his man. Touchdown number 4. 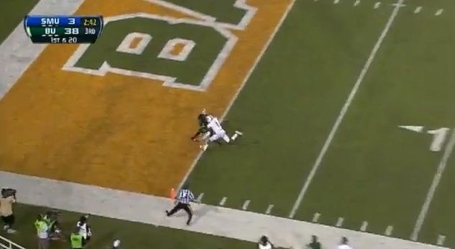 Nick had a great day versus SMU and displayed the knowledge and accuracy Baylor fans hoped he would. Whether it was long or short he rarely made a mistake and executed a very well designed gameplan.