I'm taking a little liberty with the phrase "breaking news" since this isn't exactly hot off the presses, but bear with me. The RG3-related news just keeps rolling in this morning as Robert announce personally on the Dan Patrick show that he will be on the cover of EA's NCAA Football 2013. Take that in for a moment: a Baylor QB will be on the cover of a video game played by tens of millions of people across the country. The value this has as publicity for our University and as an aid in recruiting is immeasurable. Congratulations, Robert, and congratulations, Baylor Football!*

UPDATE: I've added a sneak peak of the PS3 version of the game. (The silhouette next to him will be another player added through fan voting. I'm thinking Kendall Wright would look pretty good there!)

UPDATE #2: There will be a press conference on campus later at 2PM this afternoon where RG3 and EA Sports will formally announce Robert's selection for the cover. I believe that video will be available on BaylorBears.com, but I'll have to check on that.

UPDATE #3: Here is the official story from BaylorBears.com, including a small version of my new avatar. Also, if you were afraid of RG3 sharing his spotlight with another player from this year's class, fear not:

I think I'd go with Barry Sanders from that list, but I don't want OSU to look good on the cover. Let's say Flutie.

I also posted another image below the jump where you can see more of FCS in the background. 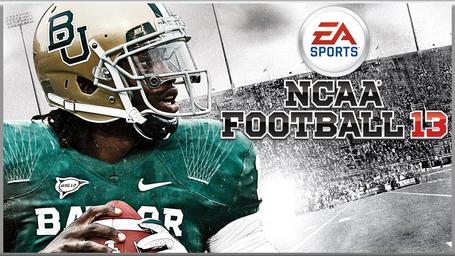