We're a week removed from the craziest offensive game of the year (so far), but what have we learned?

Share All sharing options for: Charting Baylor at West Virginia

Yeah…about that. Over 1500 total offensive yards, 98 passes, 180 total plays and a scoreboard wheezing from keeping track of the 19 touchdowns later, it seems that our expectations were correct and my hopes were folly. Going back and looking at this game in depth, it really was one of the more bizarre games I’ve ever watched. While Baylor did lose a few starters in the secondary by half time, I never expected them to be so consistently confused by Geno Smith and crew. At the same time, I had no expectations for the sort of offensive efficiency that Florence and the Baylor wide receivers were able to display either.*

Once again, I’ll try to pick out a few things that stood out to me in order to wade through the immense amount of data. If anybody has additional questions or something they are curious about, please feel free to ask in the comments below.

*Maybe we should call the offense Florence + The Receivers

Anything you can throw, I can throw better

I wrote last week that Art Briles finally lost a game of Hyper-Efficiency Chicken, wherein he tries to up the tempo to absurd levels and then see if the other team can execute as efficiently on offense as Baylor can. It’s clear that Geno Smith and the Mountaineers can this year. An example of this that stood out to me is that despite all of those offensive snaps, a fairly small percentage of them occurred on 3rd down – just over 17% for both teams. That both teams could run so many plays yet so rarely feel the pressure associated with 3rd down is quite surprising.

Furthermore, it’s clear that it was the passing attack of both teams that was the driving force behind this fireworks show. While WVU put up an acceptable (though by no means spectacular) 4.1 yards per carry, Baylor only managed 2.6 yards per carry. The passing statistics look like something out of an SEC coach’s worst nightmare. It’s not just that both teams averaged over 12 yards per passing attempt (YPA), take a look at the distribution of their YPA based on the down. 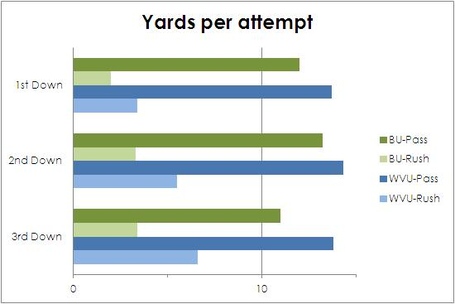 Both teams were over 10 yards per pass attempt regardless of down. While WVU in particular did attempt some WR screens, overall these were clearly not merely dink and dunk offenses of the West Coast system. Given the general success of these passing attacks on first and second down, it becomes less surprising that the teams faced so few third downs.

One of the things I noted from the last game charting was that Phil Bennett didn’t blitz much against Kolten Browning and the Warhawks. While we hoped they were keeping things under wraps for WVU, I was more convinced that Bennett was/is just risk averse and thus we wouldn’t see near the level of blitzing that we’d like.

While Bennett’s calls for a blitzes did increase from roughly 10% to 34% of the time, just counting if a LB was sent in addition to the DL is once again misleading because of the amount of time we spent in a 3 DL sets. The second pie chart instead shows how frequently we sent a certain number of rushers, regardless of position or starting alignment and it shows that we sent a meager 3 rushers over half of the time. While I can see the logic behind using more 3 man fronts given our lack of Big 12 quality defensive linemen, I strongly disagree with only rushing 3 so frequently. As an example, West Virginia almost exclusively used 3 down linemen against us, but they blitzed at least 1 LB 60% of the time and blitzed an extra 3 or more rushers more than 15% of the time. In contrast, Baylor sent an extra 3 (and never more) just three times or 3.4% of their defensive snaps. Part of the reason for this may be the effectiveness of these blitzes at preventing yards and first downs. 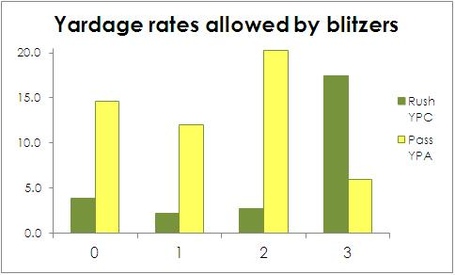 While I included plays where Baylor rushed 3 blitzers, it only occurred 3 times, so I’d suggest not putting much stock in it. Looking at the other data, it’s interesting to note that sending extra men did help with the rushing attack, but the biggest takeaway is that Baylor allowed a completely unacceptable number of yards per attempt when they blitzed. I would argue that the biggest reason for this is that Bennett insists on playing soft coverage with this DBs when he blitzes. Geno Smith is simply too good right now to assume that he wouldn’t be able to find his hot read receiver, especially when said receiver isn’t going to encounter anybody in a Baylor jersey until he’s 10 yards down the field. I know it’s more risky, but as Mark and the FX commentators and many others have pointed out, it’s not like what they’re doing right now is working; why not take a chance on something new and more aggressive?

There are so many words I could use to describe Terrance Williams day that I don’t even know where to begin. The stat line looks crazy: 17 catches, 314 yards, 2 TD. But delving into it further, it’s clear that the best offensive player for Baylor against WVU was Mr. Williams and may actually be underrated by the stat line. His ability to beat his man deep and then use his height, leaping ability and hands make plays on the ball in the air had the Mountaineers playing very soft coverage on him more as the game progressed and was eventually accompanied by lots of help from the safety. After one long completion where Terrance actually saw single coverage, the cornerback turned to the safety with a look and perhaps a few choice words for deciding to help out on Levi Norwood instead of continuing their double coverage of Terrance.

Terrance received an incredible 21 targets in the game, which was 47% of the total targets that Florence threw, but he contributed 55% of the total receiving yards, as shown below. It’s always preferred that the person who is getting the most attempts is also the person doing the most with each attempt. On a day where Baylor offensive records tumbled, the main driving force for it was Terrance Williams. 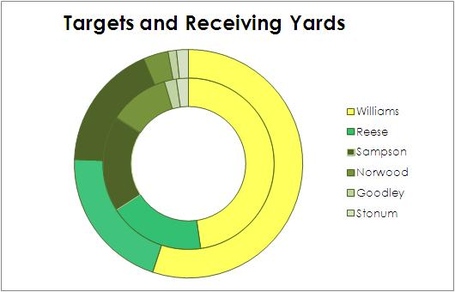 Salubi also managed the accomplishment of doing more with more.* Both Mark and I have been a bit hard on Salubi in the previous weeks for dancing around too much and not making the most of his feature back opportunities, but Salubi clearly performed better against West Virginia. I’m still not 100% convinced that Salubi will be the best option for feature back over the rest of the entire year, but I think he’s showed that he’s the running back most deserving of that title right now. Martin doesn’t give you enough upside on his runs and #FreeLache! still needs more time to learn the nuances of this offense and pass blocking. 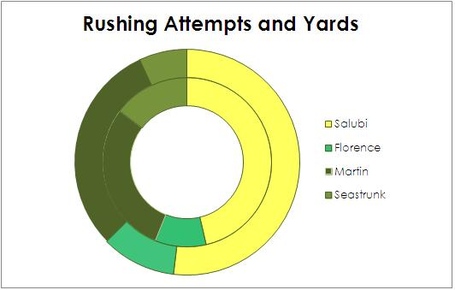 *Please note, the following chart is meant only to show the contributions to the running game. This was far less successful than the passing game, so realize that when you’re comparing the charts, there are far different total pies to be split up.

Well, that's all for this week. Hopefully we see the necessary adjustments on defense. Again, feel free to ask questions in the comment section.