On the inevitable fall of Baylor's 9 game win streak and the epic game of Hyper-Efficiency Chicken between Art Briles and Dana Holgorsen.

The 2011 Baylor football team combined offensive mastermind Art Briles with a level of offensive talent he had never had and a Heisman winning quarterback who briefly broke the record for most efficient season by a college quarterback ever. College football itself has seen it’s best players become even more efficient than their predecessors because of new schemes, new training and an increase in tempo across the game. In the figure below, I’ve charted the QB Rating of the Heisman winner by year. Notice a trend? 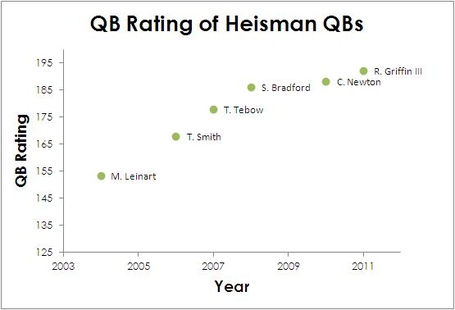 There is little doubt; Robert and Art made beautiful music. As the season progressed, Briles put an increasing amount of trust in Robert and challenged the offense to win games against some of the stingiest defenses in the Big 12. In fact, there is a decent argument to be made that had Briles had as much confidence in his offense at the start of conference play as he did by the end of the year, Baylor would have won at least one additional Big 12 game. By the end of the year, an offense loaded with future NFL talent (some of which is still around), challenged the Washington Huskies to a game of Hyper-Efficiency Chicken to be played in San Antonio, Texas. Washington obliged. While they did establish a 28 point lead at one point, there were few, if any, teams who could beat Baylor at this game last year, especially by the end of the year. Bill Connelly wrote:

Washington in no way played defense in 2011, but they played at a slow pace, played mostly in control, and went 3-0 in close games because of it. If they could keep the Valero Alamo Bowl a boxing match, they had a very good chance to win. But keeping up with Baylor is just so much fun. You can't help yourself. They scored touchdowns…and took a 42-24 lead one minute into the third quarter…It looked as if they were going to beat Baylor at their own game. One problem: you don't beat Baylor at their own game. The Bears scored 28 of the game's final 35 points. At some point, Washington seemed to consciously realize they were in a street fight and attempted to dial it back. They went ahead, 56-53, on a 13-play, six-minute drive early in the fourth quarter. But their defense was gassed, and Baylor just kept on scoring. Washington scored just twice in their final seven possessions and ended up losing by double-digits… But they got sucked into a street fight in this one, and they just couldn't keep up the pace of haymakers for 60 minutes.

Blessed with one of the best offenses of the last decade, and yoked with one of the worst defenses in Division I football, Art Briles made the rational, if aggressive, decision to play a game of Hyper-Efficiency Chicken. Lining up against his opponent, he firmly pushed the pedal to the medal and went all in on his bet that you were not going to be able to run a more efficient offense than the RG3-lead Bears. Oklahoma got close with the BellDozer, A&M and Oklahoma State jumped out to big early leads (and had home field advantage), while Kansas State was playing a different game entirely.

Unfortunately, Robert did not return to Baylor for his last year of eligibility. Briles (and his leading propagandist, Mark C Moore) assured us that the Baylor offense would continue to be talented and effective. Early in the year, teams were not willing to assume that Nick Florence was remotely as good as Robert and challenged the new-old QB to beat them with his arm. Florence showed that while he wasn’t as good as Robert, he was more than capable of taking the keys to the the Mercy and driving it to above average results. Given that the 2011 Baylor defense had decided to return, these results were necessary for wins.

Heading into their date with West Virginia in Morgantown last week, there were plenty of reasons for Baylor fans to be hopeful, despite being 11.5 point 'dogs and gap in the college polls. We had seen Baylor face good offenses both last year and this year, challenge them, and beat them at Hyper-Efficiency Chicken.

I don’t think either fan base was ready for what ended up happening. While West Virginia ended up winning the game, I can’t help but think that if this were actually a game of chicken, the two cars would have just run straight into each other, drivers' laughing maniacally with courage-filled hearts and adrenaline-filled minds. West Virginia won because they were the team who were able to drive off after the collision.

West Virginia won because they are the this year’s 2011 Baylor Bears, because Geno Smith has staked his claim to this year's Robert Griffin III, because Tavon Austin may be this year's Kendall Wright and because Art Briles of all people should know…

You don’t beat the 2011 Baylor Bears at their own game.