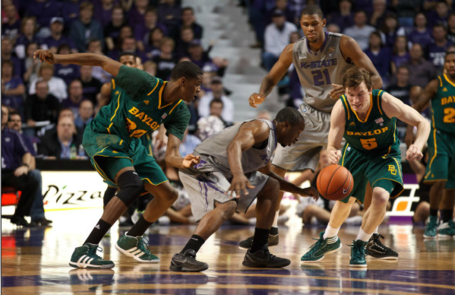 On Tuesday night I wanted to watch the basketball game in a unique way. A more interactive and somewhat enjoyable way to watch the Bears play against the Wildcats. I came up with the official Baylor Basketball drinking game. It's not too crazy, but on any given night the team could easily get you drunk. Here are the rules...

First I suggest that you buy a 40 oz of your favorite beer. I suggest Miller High Life. It's cheap, doesn't taste too bad for the price you pay, and by the end of the night (depending on how much you drank) you would be glad you wouldn't drink that crap ever again until the next game.

Take one drink if...

Here are a few more ideas if you really want to get intense...

Here are a few more suggestions by some of my readers...
The Captain is a contributor for Our Daily Bears and writer/editor of Keg In The Quad: A Baylor sports blog that Ken Starr doesn't approve of, but he is still going to show up to do a keg stand. If you like what you read, read more at keginthequad.blogspot.com.