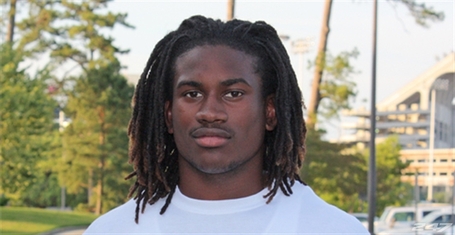 Kind of a quiet night on the Heisman front (so far), but at least two of the paid recruiting sites for Baylor are reporting (here and here) that the staff has reached out to talented JUCO WR Cordarrelle Patterson of Hutchinson CC in Hutchinson, Kansas. Depending on which site you prefer, Patterson is either a 4* (Rivals, Scout) or a 5* (247Sports) recruit.*

Patterson's profile on 247Sports (which is free to see in case you want to look at his impressive offer list) shows that he has already visited Auburn and Tennessee and that he is schedule for a visit this weekend to Georgia. The only other scheduled visit at this time is to our own Baylor University on January 13, which is being billed on the paid boards as Baylor's biggest recruiting weekend of the year.

*I'm not sure what you have to pay to see from these profiles and what you don't. I highly recommend that you subscribe to at least one of the boards (if you can afford to do so).

With Kendall Wright heading to the NFL after his record-breaking year, Baylor will need a game-breaking receiver to play alongside our three returning WRs (Terrance Williams, Lanear Sampson, and Tevin Reese). At 6'3 205 lbs (or 6'4" according to Rivals), Patterson seems to be more in the mold of Williams (and Josh Gordon before he fell in love with the ganja) than Wright (or Reese), and but the highlight videos that he has available show that he is an exceptional athlete (to my untrained eyes, at least) with good lateral quickness and change-of-direction. His JUCO coach was apparently a man after my own heart; his videos include punt returns, kick returns, and kickoff coverage in addition to running the ball and receiving. One of the videos is a little blurry, but I'm pretty sure a highlight from it was Patterson actually throwing a 30+ yard pass.

I don't intend to highlight every possible recruit that comes our way or that says they might visit; rather, I wanted to mention Patterson because he is exactly the type of recruit that probably didn't give us a second look before this season and the last. In one of the posted articles he mentions in particular how much he would like to play with Robert Griffin III in Baylor's offense. (Check out that article for more on the story. I just gave you a teaser.) I have no doubt that our recent positive exposure has played into his appreciation of the program, and I can only hope that our coaches continue to capitalize on it going forward.