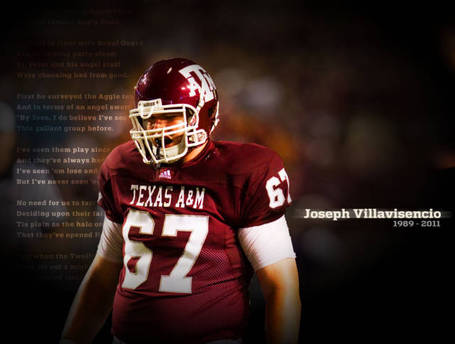 I like to make fun of Texas A&M around here for obvious reasons and the rivalry will always exist in one form or another, but news like what happened yesterday is no laughing matter. For those who don't know, reports came out yesterday afternoon that an offensive lineman for our cousins in College Station named Joseph Villavisencio was killed in a car accident while returning home for the Christmas holidays. I don't need to describe how awful of a situation this is for his family, his teammates, or the Texas A&M fans so follow their team so passionately, so I will simply say that they should all be in our prayers this weekend as we spend time with our own families. I saw on twitter that several of Joseph's teammates are working to make sure someone wears his number in A&M's bowl game, and I think that will be one small part of a fitting tribute to Villavisencio.

That news item will lead off the links today just so that people who want more information about what happened can know where to find it.

As always, if you find something worth posting, post it!