And, most importantly, all of their most fervent fans,

A few weeks ago on Monday Night Football, Terrell Suggs introduced himself as "Sizzle" from Ball So Hard University.

Here at ODB, we could only help but wonder...what would this year's team look like? There are a few guys who came to mind immediately, but we wanted to give everyone a chance to stump for their favorite candidate(s). Please note that certain positions are more competitive than others when picking your nominees, so it may make more sense to campaign for that underrated guard who reportedly head butts the statue of the school mascot before every game as opposed to more crowded fields like RB and WR.

So what makes somebody a candidate for the 2011 Ball So Hard University (BSHU) Team? This isn't merely about players with the best statistics or who will go on to be the best professional players [though that will be factored in]. This is to find the most entertaining, astounding, and incredible players in college football this year. We're not looking for the quiet, professional linebacker or safety who quietly notches 8 solo tackles a game and gives nondescript interviews afterward. We're looking for the guy who will talk trash, back it up, and then laugh in your face.

Mark, Therm, and I will decide who makes the final cut, but we're more than willing to consider all arguments for and against the best BSHU candidates in college football this year. If you still can't figure out what it is that we're looking for, well....it's this: 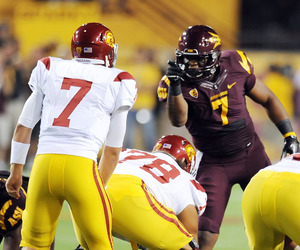