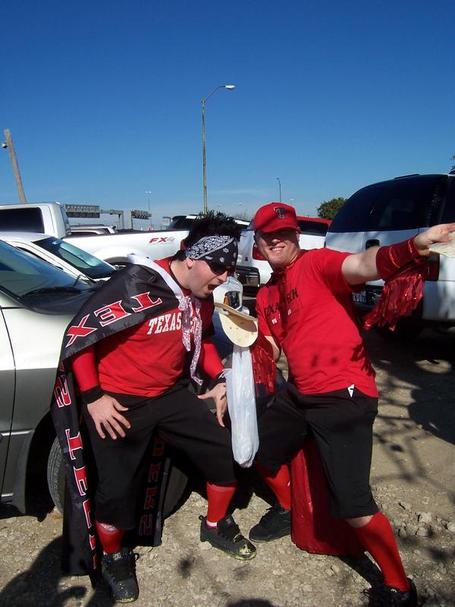 During my tenure at Baylor from 2001-2004, Texas Tech was the team that I dreaded playing the most.  Baylor was the worst football program in the conference, so it wasn't a shock when teams at the top of the conference like OU and UT would blow Baylor out.  However, being routinely blown out by Texas Tech, who was a middling Big 12 South team at the time, was an incredibly painful reminder of how far Baylor was from even the middle of the conference.

Fast forward to 2008 and an improving Baylor program has lost to a declining Texas Tech program  by a touchdown three years in a row.  Coming off of Baylor's thrilling win over OU, Baylor is favored by 12 to finally get over the hump at beat Texas Tech today in Dallas Arlington.

This is the area where I feel most confident.  Texas Tech's defense has simply not been very good this year.  They have allowed at least 31 points to every opponent except Texas State and New Mexico and as shown by Mark's excellent table of FO stats, they have graded out as one of the worst defenses in Division 1 Football by advanced metrics.  Also, it's quite likely that Baylor's offense at this moment in time is a better offense than any Texas Tech has seen all year.

Tuberville's defense this year is young and undersized; one could argue this leaves them better suited for a fast-paced track meet than some of the other defenses that Baylor has faced this season.  There are, however, two problems with this.  The first is that I have quite a bit of confidence in Art Briles' offense and it's ability to adjust (eventually) to the specific weaknesses of the defense that it faces.  I expect the younger DB's to be picked on even if that doesn't in result in as big of a day for Kendall Wright as one might expect.  Second, Baylor runs the ball almost as well as it throws it.  The advanced statistics back up what the eyes have seen of Texas Tech's defense against Texas A&M, Texas, and Mizzou -  the Red Raider defense struggles to stop the run.  I expect Briles to use the rushing attack early and often to limit the number of possessions for Texas Tech and gives his defense all the rest he can.

And now we come to the reason I am not as confident in a win as the 12 point line suggests I should be.  Texas Tech's offense seemed to be cruising along without missing a beat earlier this year as QB Seth Doege was plugged in to the altered, yet still effective Red Raider offense.  Even against solid Big 12 defenses in Kansas State, Texas A&M, and OU, Texas Tech managed 34-41 points.

But then...something happened.  I've heard varying theories on it, but something happened the week after the big win over OU and Tech has struggled to play at even the level they were at before the OU game, let alone replicating that performance.  Blowouts against Iowa State, Texas and Oklahoma State saw them notch single digits twice around a 20 point performance.

They turned it around last week going to MIzzou and jumping out to a solid lead in putting up 27 points.  Still, I struggle to decide what offense we see today from Texas Tech.  We know that they will run most of their plays out of multiple WR sets, relying on passes to the tailback and quick WR passes where most teams would run the ball continually.  I'm concerned about Baylor's ability to cover the screen passes without leaving their DB's on an island, but Texas Tech is going to need to be able to convert some big plays to keep up with RGIII and the Baylor offense.

My prediction for this game is a Baylor win in a high scoring game, but one that doesn't see Baylor cover the 12 point spread.  Less than 7 hours until it's time for RGIII to fling the some Green and Gold afar... 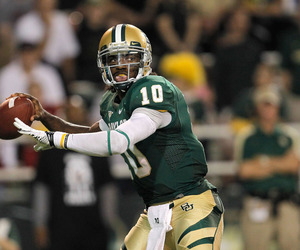