Share All sharing options for: Baylor vs. Oklahoma - Statistical Preview

It's pretty obvious to the most casual of observers that the Bears have their work cut out for them this weekend when Oklahoma comes to town. Landry Jones's body of work as a quarterback speaks for itself. While Ryan Broyles's injury definitely affects the Sooners' offense, and Dominique Whaley being out as well probabl yhurts too, the Sooners still have plenty of top shelf skill position talent to throw at Baylor in waves - Roy Finch and former Baylor commit Brandon Williams in the backfield, and Kenny Stills, Jaz Reynolds and underrated tight end James Hanna catching passes.

Below is a look at what Football Outsiders' Fremeau Efficiency Index (FEI), Bill Connelly's S&P+ statistics say about how Baylor & Oklahoma have performed to date, and how the two teams' relative strengths and weaknesses will effect the outcome on Saturday night.

As you can see from the chart above, both FEI and F/+ think that Oklahoma wins comfortably on Saturday night. This probably jives with your thinking about how the game will turn out, it definitely jives with conventional wisdom. I think FEI probably gives both defenses a little too much credit in relation to how many points will be scored by both teams.

Further, the following chart appeared today on the mothership in Bill Connelly's game writeup, showing each team's Adjusted Score margin for every game this season. Adjusted Score is a metric that basically tells you how many points a team would have scored and allowed on a given day, given their performance, if they played a perfectly average FBS opponent. By Adjusted Score, Oklahoma would be 8-1 (their performance against Tech was that woeful, by their standards); Baylor would be 7-2, losses coming in the weeks they played Oklahoma State and last week against Kansas (I apologize for breaking the "Never again will we talk about that Baylor-Kansas game again" rule).

You'll notice further that both teams have had a pretty disappointing downward trend in their performances over the season. 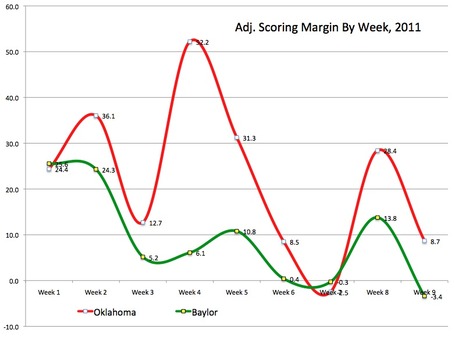 Now, let's drill down a little deeper and look at how things should go on either side of the ball. The charts below show each team's respective rank in each category, rather than their raw metric total. For more information on any of the below metrics, go here for F/+, here for FEI, or here for S&P+. All of these numbers are courtesy Football Outsiders.

When Baylor is on Offense:

It doesn't take a genius to know that Baylor's Offense has been really, really good this season, but it isn't exactly as intuitive that Oklahoma's defense has been nearly equally great. You can' t look at yardage and points totals alone to evaluate a Big 12 defense - teams run too many plays, throw the ball too many times, and just generally play at a faster pace than the rest of the country. These metrics pull out all of that noise and equalize things so you can really evaluate a matchup. Here are the two big things about this matchup to me.

When Baylor is on Defense:

It doesn't take a genius to know that Oklahomas Offense has been really, really good this season, it isn't exactly as intuitive is just as obvious that Baylor's defense has been nearly equally awful...Even when you adjust for the great offenses we've faced, we've just struggled defensively this year. Here are the two big things about this matchup to me.

Uhh... yikes. Why we need 3 WR coaches and haven't hired a special teams coach is beyond me, but that's a discussion for another day. Our special teams are historically awful. OU's aren't really that special, but average against awful can look pretty dang good. I guess we can hope that Spencer Roth breaks out of whatever funk he's in (I read too many glowing reports from the coaching staff and comparisons to Sepulveda and Epperson to believe that Roth sucks), and hope that we both a) kickoff the ball in bounds and b) stay in our lanes on kickoffs. Our field position advantage has been terrible primarily because Roth and Ben Parks/Aaron Jones just haven't been able to get any length on their kicks. Our coverage teams have been okay. OU clearly does a great job kicking the ball deep and covering. I'd like it if we run Kendall Wright back there to return punts tomorrow to try and neutralize this advantage.

Our offense is great; the other two sides of the ball have really hurt us this year. Maybe we'll have a historical performance to talk about on Monday, but if we do, odds are we're talking about how Oklahoma came to town and laid a country whipping on us.