Wow.  What an incredible finish.  The box score above basically tells the story of this game.  Terrible for three quarters, Baylor, behind quarterback Robert Griffin III, scored touchdowns on three consecutive drives of 89, 98, and 80 yards.  Those three scores erased a 24-3 Kansas lead when the quarter began and helped Baylor amass 267 yards in the 4th quarter alone, nearly double the total from the previous three quarters.

The story for Baylor's offense was, of course, Robert Griffin, who accounted for over 400 yards of total offense on his own.  When the below table updates with stats from the game, you'll see RGIII was 22-29 for 312 yards and 3 TDs through the air and 10 carries for 103 yards and a TD on the ground.

The Baylor broadcast also highlighted the contributions of sophomore Tevin Reese, whose incredible adjustment on a throw from RGIII in the fourth quarter led to a key 69-yard TD pass.  Reese finished the game with 6 catches for 127 yards and 2 TDs.

The story of the game, however, was not entirely Baylor's offense.  The much-maligned defense, gashed for over 200 rushing yards and 24 points through the first three quarters benefitted from a combination of good luck and goo play in the fourth quarter, highlighted by Elliot Coffey's interception on Kansas's last drive in regulation.  (That he intercepted a tip ball after what should have been a pass interference call against Baylor's Sam Holl is something we don't need to discuss.)  Also worthy of note were the efforts of Joe Williams, who batted away the two-point conversion attempt on the last play of the game, and Tevin Elliot, who had a key sack and a tackle for loss on Kansas's last drive in regulation.

The lasting story of this game will be a victory for the Bears and a return to the ranks of the bowl-eligible for the second-consecutive year after a drought of nearly 20 years before that.  It wasn't easy as it required the largest fourth-quarter comeback in school history, but Baylor realized its dream of bowl eligibility in a thrilling game by refusing to quit and finally winning in overtime over Kansas.  Winning today was key to Baylor meeting its own goals with only OU, Tech, and UT remaining on the schedule.
Congratulations to Art Briles, of whom I have been extremely critical recently, and the Baylor Bears for their sixth win of the season today over the Kansas Jayhawks!
UPDATE: The current Big XII standings ... 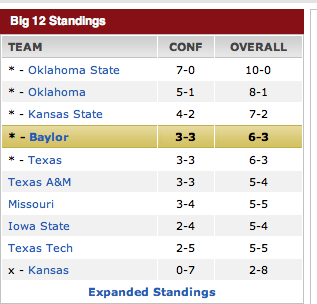 That K-State game is going to haunt Baylor forever.  Still, nice to see that asterisk by Baylor's name!